No. 23 Chants turn excitement into support for grieving UVA 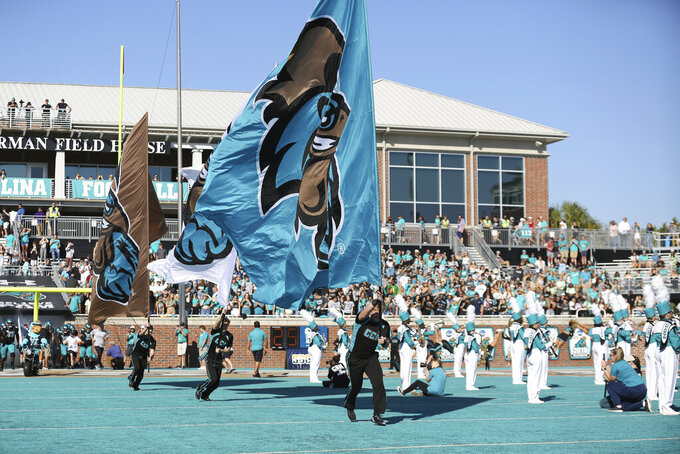 FILE - The Coastal Carolina cheerleaders lead the team onto the field before an NCAA college football game against Georgia State on Nov. 13, 2021, in Conway, S.C. What looked like a week of opportunity for No. 23 Coastal Carolina quickly became one of grief and unconditional support for the University of Virginia football team the Chants were supposed to play on Saturday, Nov. 19, 2022. That game was called off Wednesday, Nov. 16, as Virginia continued grieving their three football players killed by a former member of the Cavaliers last Sunday night, Nov. 13. (AP Photo/Artie Walker, Jr., File)

CONWAY, S.C. (AP) — What looked like a week of opportunity for No. 23 Coastal Carolina quickly became one of grief and unconditional support for the Virginia football team the Chants were supposed to play on Saturday.

That game was called off Wednesday as Virginia continued grieving their three football players killed last Sunday night by a former member of the Cavaliers.

“We play a great game,” Coastal Carolina coach Jamey Chadwell said Wednesday. “But it is a game.”

Chadwell has known Virginia coach Tony Elliott for years and told him earlier this week Coastal Carolina was 100 % behind any decision by the Cavaliers.

“We continue to pray for their community, their university and, obviously, this is a difficult time they're going through,” Chadwell said.

Coastal Carolina has been a Group of Five power in the Sun Belt Conference the past three seasons in just its sixth year in the the FBS.

The Chanticleers were ranked each of the previous two seasons, going 11-1 and 11-2. They finished No. 14 in the final 2020 rankings and won the program's first bowl game, 47-41 over Northern Illinois in the Cure Bowl this past December.

Quarterback Grayson McCall, a fourth-year junior back this season, set an NCAA record for pass efficiency with a rating of 207.6 last season.

Coastal Carolina was off to another strong start at 9-1, jumping into the Top 25 for the first time this season after a 26-23 defeat of Southern Miss. In the postgame, Chadwell had pressed the team's case to be the Group of Five's representative for a New Year's Six game.

Coastal Carolina could make a bigger statement with Virginia of the ACC up next. That focus changed as soon as Coastal coaches and players learned of the Virginia tragedy.

Thoughts of on-field success “goes away when something like this happens,” Chadwell said. “You're not thinking about any of that stuff.”

Chadwell and his staff gathered their sad, confused players and gave them advice moving forward. They discussed potential reasons for the tragedy that took the lives of wide receivers Lavel Davis Jr. and Devin Chandler, and defensive end D'Sean Perry.

“We told them how precious life is," Chadwell recalled. "One day, you're on top of the world and the next day something terrible can happen.”

Chadwell knew Virginia's Davis, recruiting him as a Chanticleers assistant out of Woodland High in South Carolina's Lowcountry region about an hour from Charleston. Chadwell said Davis had “a smile that would light up a room.”

Davis cared about football, but Chadwell discovered a diverse young man with several interests. “He could see there was a bigger picture than just football,” the coach said.

So, too, for Coastal Carolina's players who practiced the past two days just in case. Chadwell gave them Wednesday off. The group will reconvene for workouts Thursday and Friday before having Saturday free, then start prep for the regular-season finale at James Madison.

The Chanticleers have clinched the Sun Belt's East Division and will play for a conference title on Dec. 3.

The game with Virginia was part of a three-year agreement where the Cavaliers would come to Coastal in 2024 before a final game in Charlottesville in 2025. Coastal Carolina athletic director Matt Hogue said through a spokesman his school hasn't brought up the future in the wake of the killings. Those concerns, both on-field and logistical, are for later.

Chadwell said practice was choppy and disjointed. “I'd be lying if I said we were locked in,” he said.

They'll regain their football focus over time. Chadwell hopes they remember their talks this week.

“Try and make sure you make the most of every moment,” he said. “If you have any hate in your heart, any resentment you're holding onto, you need to forgive and let go because you don't know when you'll get the opportunity.”