No. 25 Tulsa looks to keep momentum against Tulane 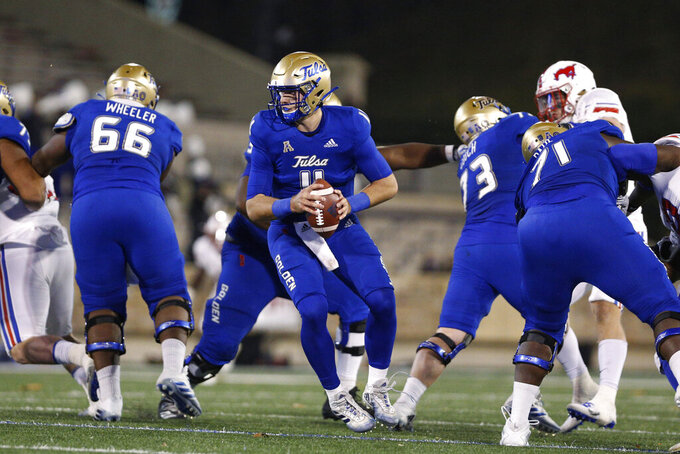 Tulsa quarterback Zach Smith (11) looks for a receiver during the second half of the team's NCAA college football game against SMU in Tulsa, Okla., Saturday, Nov. 14, 2020. (AP Photo/Joey Johnson)

The Golden Hurricane garnered national attention by rallying from 21 points down to defeat then-No. 19 SMU last Saturday. The rewards were the No. 25 spot in the latest Associated Press poll and control of their path to a possible American Athletic Conference championship game.

“I’m excited for our guys -- just the amount of work and things they put into it,” Tulsa coach Philip Montgomery said. “Just to be recognized like that -- that’s great for our program and great for our young men that have worked so hard to make something like that happen.”

The Golden Hurricane (4-1, 4-0 American Athletic Conference) could go right back to anonymity if they don’t show up ready to play against Tulane on Thursday night. The Green Wave have won three straight and are coming off a 38-12 win over Army.

“Kind of throw all the records out the window,” Montgomery said. “It is the best defensive line we’ve seen all year. They get a ton of pressure, they’re great against the run. It’s going to be a great test for us, especially on a short week.”

“We’ve got a chance to finish strong and go to three straight bowl games,” Tulane offensive coordinator Will Hall said. “Looking long-term, got a chance to win out and win more regular-season games than has been done in a long time and continue to raise the standards of this program, which is why we all came here.”

Pratt will need to deal with Tulsa linebacker Zaven Collins. The 6-foot-4, 260-pound junior has been named AAC Defensive Player of the Week in three of the five games he’s played.

Collins leads a defense that ranks second in the AAC play in fewest points allowed per game, second in rushing defense and third in total defense.

“They are playing great defensively,” Tulane coach Willie Fritz said. “They are a three-man front, but they just close the door on you with second-level and third-level players.”

Tulsa is ranked for the first time since the end of the 2010 season.

The Golden Hurricane earned the ranking with its second win over a top 20 team this season -- Tulsa beat then-No. 11 Central Florida earlier in the season. It is the first time Tulsa has beaten two ranked teams in the same season.

Tulsa has rallied from deficits of at least 14 points in wins over Central Florida, East Carolina and SMU.

“I’m very proud of our football team, how resilient they are continue to keep battling and fighting and have shown to do that throughout the years, but especially this year, finding ways to win,” Montgomery said.

Tulane running back Amare Jones has caught Montgomery’s attention The junior has 314 yards rushing, 87 yards receiving, 348 yards on kick returns and another 31 on punt returns.

“They use Amari in a lot of different spots -- receiver, at quarterback and running back and get the ball to him in a variety of different ways and do a great job of using him,” Montgomery said.

Tulsa quarterback Zach Smith has been dynamic after halftime in the three comeback wins. In first halves of those games, he completed 48% of his passes for 301 yards and one touchdown with four interceptions. In the second halves of those, he has completed 62.5% of his throws for 550 yards with six touchdowns and just one interception.

Tulane defensive end Patrick Johnson leads the nation with 10 sacks. He had a sack against Army to bring his school-record career total up to 24½. He leads a unit that has allowed 307 yards and 12 points per game during Tulane’s three-game win streak after surrendering averages of 475.2 yards and 35.3 points in the first six games.