No. 3 Alabama braces for big road test at No. 6 Tennessee 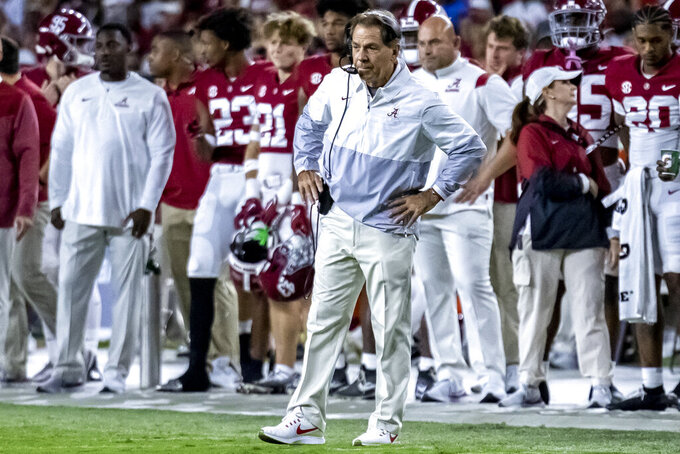 Alabama coach Nick Saban stands near the sideline during the first half of the team's NCAA college football game against Texas A&M, Saturday, Oct. 8, 2022, in Tuscaloosa, Ala. (AP Photo/Vasha Hunt)

The No. 6 Volunteers host No. 3 Alabama (6-0, 3-0 SEC) on Saturday, and it's the first time since 1989 that both have been unbeaten going into the Third Saturday of October rivalry game. Tennessee (5-0, 2-0) is trying to crack college football's elite for the first time since 2006, when the Vols last beat Alabama.

“This is why you come to Tennessee and want to be in this league,” Heupel said.

Alabama has been a regular atop the Southeastern Conference — not to mention winning six national titles — since hiring Nick Saban as head coach. He is 15-0 against Tennessee since then and he knows how crucial beating Tennessee is no matter the records.

“This game means a lot to a lot of people in Alabama,” Saban said. “It’s kind of a rivalry game.”

That's an understatement at least this season. The Vols are coming off a 40-13 win at LSU, while Alabama had to hold on to beat Texas A&M 24-20, a win that dropped the Tide two spots from the No. 1 ranking.

The Vols see themselves as the Crimson's Tide's biggest challenge though Heupel said: “The expectations we should be concerned about are our own expectations.” Tennessee quarterback Hendon Hooker, now being mentioned in the Heisman Trophy conversation, said it's a matter of "Just staying even-keeled.”

Quarterback Bryce Young missed Alabama's win over Texas A&M with a sprained shoulder and was questionable at midweek. Redshirt freshman Jalen Milroe stepped in for the reigning Heisman Trophy winner and delivered an uneven performance against the Aggies.

Tennessee fans painted Neyland Stadium an orange-and-white checkerboard pattern for a win over Florida. That's what Alabama safety Jordan Battle is expecting, though all orange seems to be the color of choice fora game so big Tennessee has set up an outdoor watch party area for the sold-out game.

“We know it’s going to be loud,” Battle said. "I know we probably haven’t played the best on the road this year so this week will be a big emphasis of trying to play better on the road.”

Young last played in the second quarter against Arkansas and will evaluated all week. If Young doesn't play, Milroe ran for 83 yards against A&M.

That could give the edge at that position to Tennessee. Hooker has completed 70% of his passes for 1,432 yards and 10 touchdowns without throwing an interception running the nation's top offense in yards and has passed Young in the midseason Heisman Trophy odds, according to FanDuel Sportsbook.

“He's always a threat to run it too, which makes it more difficult, and they've got really good skill guys,” Saban said of Hooker. “And their entire offensive team is very efficient in how they operate and how they execute.”

Tide linebacker Henry To’oTo’o is playing in this game for the fourth time and second since transferring from the Vols where he was a two-year starter. To'oTo'o had three tackles in two games against Alabama. He had five tackles in last season’s game for the Tide and now returns to Neyland Stadium on the opposite sideline.

“Definitely super excited,” To’oTo’o said. “So definitely going to be a huge challenge.”

Cedric Tillman, the Vols' top returning wide receiver, missed the last two games after a high ankle sprain during a win over Akron. He had a “tightrope” surgery to speed up his recovery time and is expected to play against Alabama. Left tackle Gerald Mincey also is expected back after sitting out the LSU game with an undisclosed injury.

But the Vols have lost cornerback Warren Burrell to season-ending surgery for an upper body injury. Starting safety Jaylen McCollough may miss the game after being arrested on an aggravated assault charge last weekend.

Alabama coaches regularly talk about the records of teams with various turnover margins. The more turnovers, the uglier the records.

Alabama is defying the odds — so far — despite being in a three-way tie for 115th nationally with a minus-5 turnover margin. North Texas (3-3) and Kent State (2-4) are the other two. Saban insists they've been emphasizing holding onto the ball “like crazy.”

“This is the first time in a long time we’ve had a negative turnover ratio at this point in a season," Saban said. "We don’t get enough turnovers on defense, and we’ve given the ball up more than we have historically. And both of those things need to improve, because it is very, very challenging.”