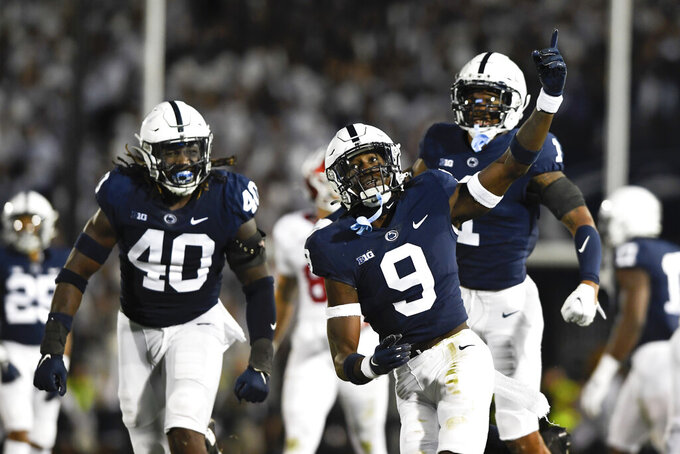 Penn State cornerback Joey Porter Jr. (9) celebrates a fourth down stop on Indiana in the first half of their NCAA college football game in State College, Pa., on Saturday, Oct. 2, 2021. (AP Photo/Barry Reeger)

Penn State forced eight punts, two turnovers and blocked a field goal to lift the Nittany Lions to a 24-0 victory over Indiana on Saturday.

Penn State opened the scoring on its second drive when Clifford scrambled left and flung a 10-yard pass to Strange with 5:28 to play in the first quarter.

Raheem Layne intercepted Clifford’s pass in Penn State territory on the Nittany Lions’ next possession. Although Layne returned it to the 13, the Hoosiers couldn’t crack Penn State’s stout red zone defense. They ran four plays inside the 5 only to turn the ball over on downs on a fourth-and-short try.

“I thought that was a huge play,” Franklin said. “Defensively, I just think we’re playing really good, complimentary defensive football. I don’t know if we’re overwhelming in any area, but I think the defense is doing their job.”

The offense did its part, too. After the defensive stop, the Nittany Lions responded with their longest drive of the season.

They got a boost from running back Keyvone Lee who took off for a 44-yard gain up the middle on second down. He added a 21-yard run moments later to set Penn State up inside the 5. Clifford capped the sequence with a rollout pass to Dotson in the back of the end zone. The 8-yard scoring toss made it 14-0 with 13:31 to play in the first half.

Indiana’s opening second-half possession ended badly when Penix was sacked by linebacker Brandon Smith. Penix went down on his left shoulder and was down on the field for a few minutes. He walked to the locker room and was replaced by Jack Tuttle.

Indiana coach Tom Allen said after the game that Penix injured his throwing shoulder and would undergo further tests when the team returns home.

The backup didn’t fare much better. On his first dropback, Tuttle was sacked hard on third down by Arnold Ebiketie.

“They played good defense,” Allen said. “They make it really hard to run the football. We have to make sure we take that pressure off our throwing game, stay on the field and get first downs.”

Penn State put together another strong drive and increased its lead to 21-0 when Clifford, throwing on the run again, found Dotson cutting inside Indiana’s defense for a 30-yard score.

Tuttle gave Indiana some life when he completed his next three passes for a combined 58 yards, steering his teammates into scoring position midway through the third. But the drive stalled, and Smith blocked a 30-yard field goal attempt by Charles Campbell three plays later.

Clifford and Dotson have combined for 18 total touchdowns, the most for any QB-WR combo in Penn State history.

The record of 17 was previously held by Todd Blackledge and Kenny Jackson.

Indiana: The Hoosiers played well enough on defense and held Penn State’s big-play offense to just 14 first-half points. Offensively, however, Indiana had very little going on. Penix completed just eight of his first 19 throws for 109 yards and one interception and no matter who Indiana’s QB is moving forward, they’ll need more help from everyone around them if this team wants to make any progress.

Penn State: Clifford continues to play well and the Nittany Lions got more out of their running game by getting Lee involved. The Penn State defense might’ve played its best game of the season. Indiana’s offense was smothered all night, and neither QB had time or space to throw with any accuracy.

Penn State will have room to move up after No. 3 Oregon fell to unranked Stanford.

Penn State: At No. 5 Iowa on Saturday.