No. 7 Indiana excited to be in Outback Bowl against Ole Miss 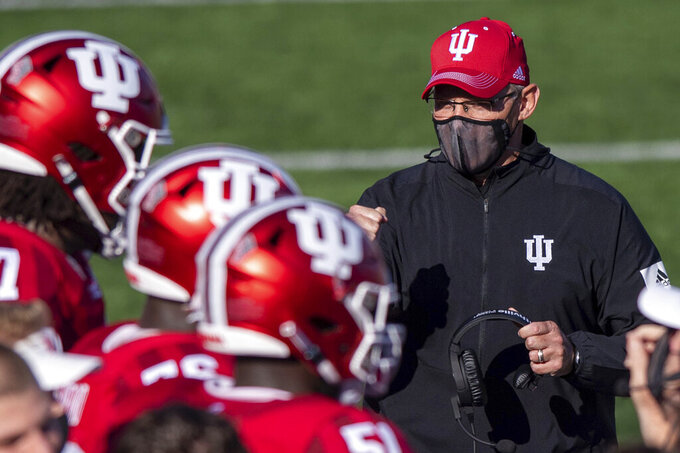 FILE - In this Saturday, Nov. 7, 2020, file photo, Indiana head coach Tom Allen looks toward his players on the sideline during a break in the second half of an NCAA college football game against Michigan in Bloomington, Ind. Allen is coach of the year on the Associated Press All-Big Ten football team. (AP Photo/Doug McSchooler, File)

TAMPA, Fla. (AP) — No. 7 Indiana is not going to let anything dampen its enthusiasm.

Bypassed for a berth in a New Year's Six game despite being off to their best start since 1993 and holding their own in a seven-point loss to CFP participant Ohio State, the Hoosiers (6-1) will close a breakout season against Mississippi (4-5) in Saturday’s Outback Bowl.

“We were definitely kind of bummed out about what happened with the New Year's Six bowl game, but we just kind of used that as fuel to the fire,” running back Stevie Scott III said.

“It has been 29 years since we last won a bowl game,” quarterback Jack Tuttle said. “We are fighting and doing everything that we can to be in the best possible situation for Saturday to get the win.”

Indiana hasn’t won a postseason game since beating Baylor 24-0 in the 1991 Copper Bowl. The Hoosiers are appearing in consecutive January games for the first time in program history, and the trip to the Outback is a homecoming or sorts for coach Tom Allen and a number of his players.

Indiana’s roster includes 22 players from the start of Florida, 10 from the Tampa Bay area, where Allen once coached high school ball and later returned to work as an assistant coach at USF, which plays its home games in Raymond James Stadium.

Tuttle, a transfer from Utah, will make his second start for the Hoosiers in place of one of those Tampa area products, Michael Penix, Jr., who suffered a season-ending knee injury that could have derailed Indiana in late November. Instead, the Hoosiers rallied around Tuttle and beat Wisconsin 14-6 in what turned out to be the only game the team has played in the past month.

“That game helped me improve so much and gain confidence,” Tuttle said. “Now it’s not about it’s his first start, it’s time to get your feet wet.’ Now it’s just kind of playing football, improving from that game and prepping for Ole Miss.”

Mississippi, which will be short-handed due to some opt outs and injuries, is in a bowl game for the first time in five years. The Rebels have also been dealing with COVID-19 issues, but coach Lane Kiffin said there never was really a question whether the team would make the trip to Florida.

“This will be challenging. They are very good. ... Their only loss is to Ohio State by one score,” Kiffin said of Indiana.

“We’re really struggling with injuries and opt outs and COVD,” Kiffin added. “We’re kind of running out of players, which is not ideal when you’re a tempo offense. But it is what it is.”

Despite losing five of nine games against an all-Southeastern Conference schedule, Mississippi had one of the nation’s most prolific offenses. The Rebels averaged 562.4 yards and 40.7 points per game, with quarterback Matt Corral throwing for 2,995 yards and 27 touchdowns while also rushing for 469 yards and four more TD’s.

The problem was a porous defense yielded 40.3 points and a nation’s-worst 535.7 yards per game in the team’s first season under Kiffin.

Penix was a big part of Indiana’s success this season, however, the defense led by linebacker Micah McFadden did its part, too. The Hoosiers have allowed an average of 19.4 points and 361.7 total yards. They led the nation with 17 interceptions, even though Indiana played only seven games.

WE PLAY OFFENSE, TOO

Scott and wide receiver Ty Fryfogle are key components in Indiana’s offense. Scott rushed for 462 yards and eight touchdowns and Fryfogle has 34 receptions for 687 yards and seven TDs this season.

Tuttle calls Fryfogle, a native of Mississippi, a “special” player.

“He is great and makes my job a whole lot easier,” the quarterback said.

This will be the first meeting between the schools. In fact, it’s rare that Ole Miss is facing a Big Ten opponent at all.