No. 9 Mississippi rolls into game with struggling Auburn 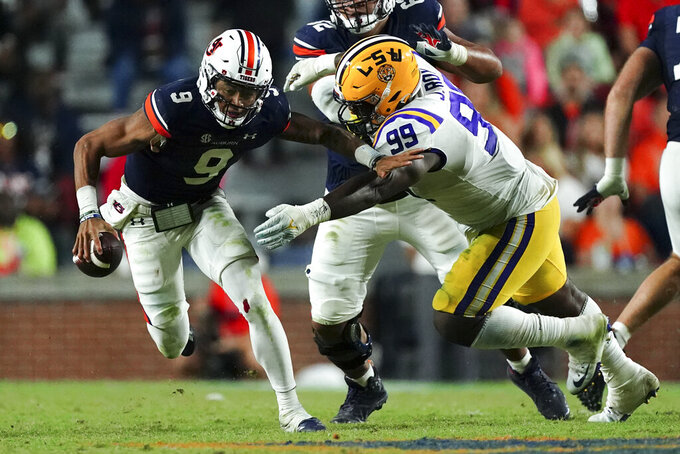 Ole Miss is trying to keep pace with No. 3 Alabama in the SEC West after rallying to beat Vanderiblt. Auburn is just trying to reverse the bleeding and perhaps cool down coach Bryan Harsin's hot seat going into an open date. The Tigers have dropped two straight games, including a 42-10 loss at No. 1 Georgia. Auburn has been outscored 125-31 in the second half of its last nine outings against Power Five teams.

The Ole Miss running game against Auburn's defense, which yielded 292 yards and six touchdowns rushing to Georgia. The Rebels and Georgia are tied for the FBS lead with 21 rushing touchdowns. Ole Miss freshman Quinshon Judkins leads all freshmen with eight rushing touchdowns and Zach Evans has six.

Auburn: QB Robby Ashford has delivered big plays and some mistakes, too. But he's the key to making the Tigers go and is still averaging 14.8 yards per completion, sixth nationally. Ashford is a dual threat but is completing just 48% of his passes with three interceptions and some fumbling issues.

Ole Miss: QB Jaxson Dart is the only quarterback in the SEC averaging more yards per completion than Ashford (14.9). The USC transfer and the Ole Miss passing game picked up a huge head of steam against Vanderbilt.

Auburn has won the last six meetings and holds a 13-3 advanage in Oxford. ... Ole Miss is one of five FBS teams with both a 500-yard rusher and a 500-yard receiver. Quinshon Judkins has run for 581 yards and Jonathan Mingo leads the SEC with 507 receiving yards, including an Ole Miss-record 247 against Vanderbilt. ... Auburn tailback Tank Bigsby has just 198 rushing yards over the last five games, averaging 3.14 yards per carry. ... Auburn transfers Ladarius Tennison and J.J. Pegues are playing big roles on the Ole Miss defense. ... John Samuel Shenker's 65 career catches is the most by an Auburn tight end.