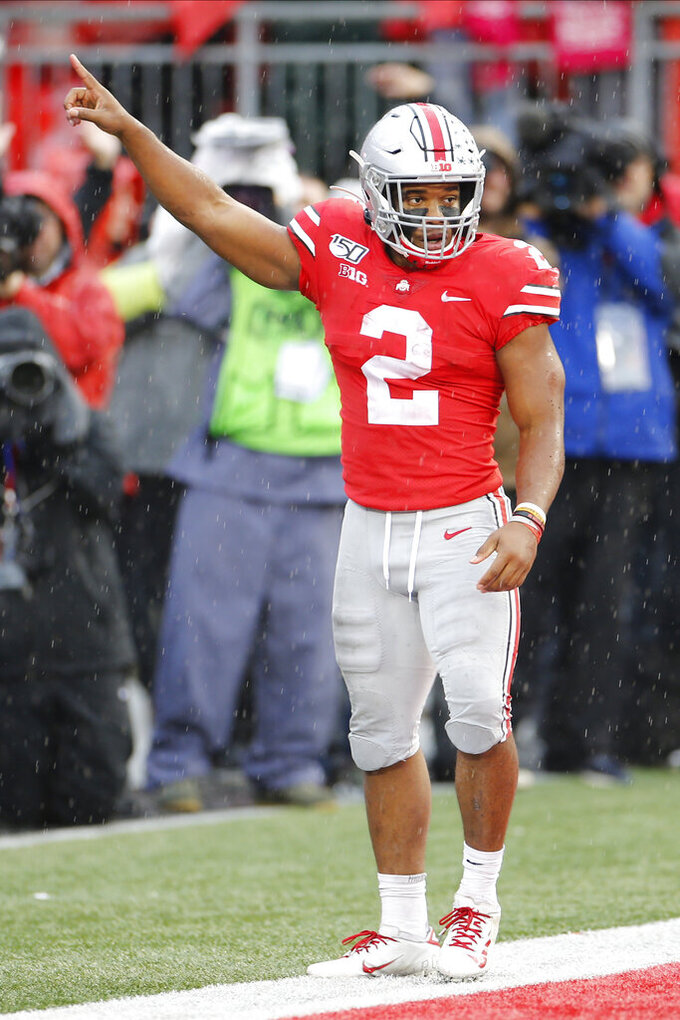 COLUMBUS, Ohio (AP) — Ohio State's J.K. Dobbins is backing up his preseason declaration that he's the best college running back in the nation.

Dobbin's 163 yards against then-No. 13 Wisconsin and its top-ranked defense last week put him over 1,000 yards. He's the first Ohio State back to hit the 1,000-yard mark in each of his freshman, sophomore and junior seasons.

That's the territory of Archie Griffin, college football's only two-time Heisman Trophy winner. The Ohio State star ran for over 1,000 yards in his sophomore, junior and senior seasons.

Dobbins leads a balanced offense that many believe is the most complete Ohio State team in years. The No. 3 Buckeyes swept away Wisconsin 38-7 on what is looking like an inevitable march to the College Football Playoff.

Dobbins' numbers could be gaudier. He sat in the latter parts of blowouts — and all eight Ohio State wins ended up blowouts. Second-stringer Master Teague has gotten so much late playing time that he's already piled up 588 yards on 86 carries.

In practices before last week's game, Dobbins' teammates ribbed him about the Heisman hype that was following Wisconsin back Jonathan Taylor to Columbus. The Badgers star was widely considered the nation's best back.

Dobbins responded with 163 yards and two touchdowns and caught three passes for 58 yards — a total of 221 all-purpose yards — earning him Big Ten Offensive Player of the Week honors.

"I know that was fueling him a lot," Ohio State guard Wyatt Davis said. "I still didn't understand why J.K. didn't have as much hype as he did. We were all just saying this is your time to prove it."

"They've got a lot of pride, our guys, and J.K. ran with a chip on his shoulder," Ohio State coach Ryan Day said. "Jonathan Taylor is a wonderful running back, but (Dobbins) felt like he wanted to be the best running back in the game. It had a lot to do with the way he ran, but it also had to do with the offensive line."

Dobbins is second in the nation behind Oklahoma State's Chuba Hubbard, who hasn't gotten a lot of national attention despite amassing 1,381 yards and 16 touchdowns.

Dobbins worked his way into the Heisman Trophy conversation, along with his quarterback Justin Fields and defensive end Chase Young, who had four sacks against Wisconsin.

With all the accolades, Dobbins believes he's got more to prove as Ohio State enters the stretch run. After a week off, the Buckeyes face Maryland, Rutgers, No. 5 Penn State and No. 14 Michigan.

"Yeah, I find things I need to get work on because my performances have been OK," he said. "They have not been outstanding. I'm trying to find a way to have that outstanding performance. It's going to come if I keep working on my craft."