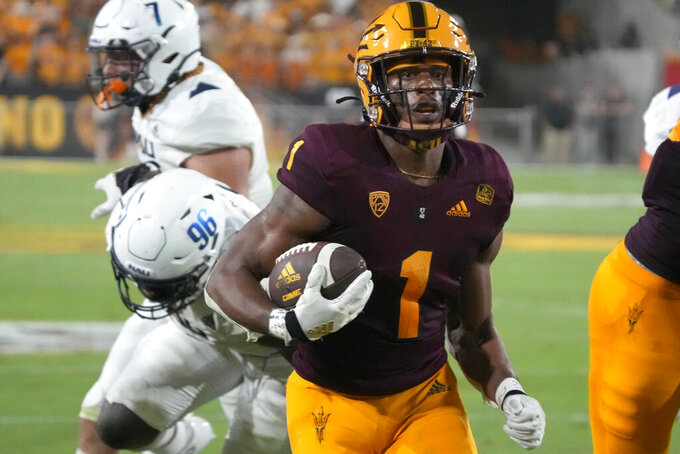 Arizona State running back Xazavian Valladay (1) scores a touchdown against Northern Arizona during the first half during an NCAA college football game Thursday, Sept. 1, 2022, in Tempe, Ariz. (AP Photo/Rick Scuteri)

Oklahoma State quarterback Spencer Sanders picked up where he left off last season in the opener against Central Michigan.

Sanders passed for a career-high 406 yards and matched a career high with four touchdown passes in a 58-44 win over the Chippewas. He also rushed for 57 yards and a career-best two touchdowns. He’s the nation’s leader in total offense heading into No. 11 Oklahoma State’s game against Arizona State on Saturday night.

“It allows Spencer to freelance a lot and make decisions on his own, do what he wants to do in our style of offense,” Gundy said. “He has a really good feel for our offense and a pretty good idea of what we’re trying to accomplish. That allows him to make plays and use his ability.”

He will try to put another stellar performance together when the 11th-ranked Cowboys (1-0) host Arizona State (1-0), but he’ll face a confident defense. Arizona State allowed just 120 yards in a 40-3 win over Northern Arizona last week. The Sun Devils allowed just 97 yards passing and 23 yards rushing. Linebacker Merlin Robertson led the way with 11 tackles.

“I think it’s gonna be big,” Arizona State defensive coordinator Donnie Henderson said. “I mean, we’re going on the road to play a great opponent and we’d like to show well, obviously compete, be physical, keep the ball in front, try to contain the quarterback, play our style of defense so to speak.”

Arizona State features running back Xazavian Valladay. The transfer from Wyoming is the FBS’ active career rushing leader with 3,397 yards. He rushed for 116 yards and two touchdowns in the win over Northern Arizona.

The transfer from Florida rushed for 758 yards last season and might have the mobility to avoid Collin Oliver, Brock Martin and the rest of Oklahoma State’s talented pass rushers.

“They really helped themselves with the quarterback they brought in from Florida,” Gundy said. “He’s athletic, he can run and make plays with his legs and throws the deep ball well, so it’ll be a good challenge for us.”

Oklahoma State seemed sluggish in the second half against Central Michigan and got outscored 29-14.

Defensive tackle Brandon Evers said Central Michigan isn’t getting enough credit for the performance and it’s being looked at as simply a failure by Oklahoma State. He said quarterback Daniel Richardson and running back Lew Nichols III are top-notch players.

“They’re a team who, in my opinion, is probably going to win their conference and compete in a bowl game this year,” Evers said. “They’re very talented. That running back over there is really good. The quarterback was a lot better than we gave him credit for.”

Arizona State lost offensive lineman Joey Ramos for the season with a severe high ankle injury. Ramos, a 305-pound transfer from Iowa State, started against Northern Arizona. Arizona State coach Herm Edwards had announced he did not expect it to be serious at first.

“I talked to Joey and told him I apologized, saying what I said as I should know better,” said.

Miller, who was elected earlier this year to the College Football Hall of Fame, will be honored for that selection on the field on Saturday and will accept a plaque that will stay on permanent display at the school.

Miller finished fourth in the Heisman balloting in 1976 and second in 1977. His 4,754 yards rushing were the fourth-most in NCAA history when his career ended. He is the only rusher in Oklahoma State history with three 1,000-yard seasons.