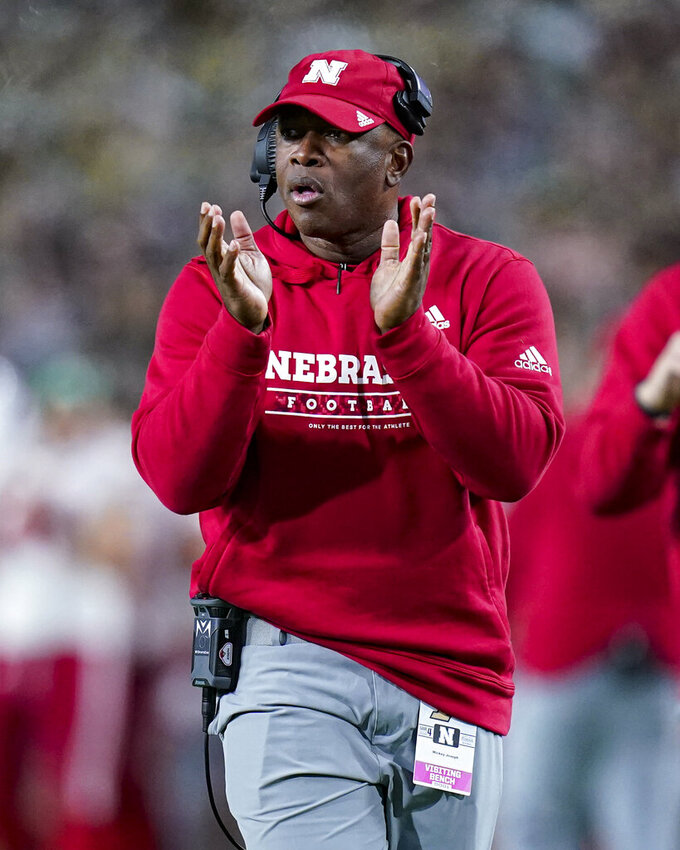 Nebraska head coach Mickey Joseph cheers after a touchdown against Purdue during the first half of an NCAA college football game in West Lafayette, Ind., Saturday, Oct. 15, 2022. (AP Photo/Michael Conroy)

LINCOLN, Neb. (AP) — Mickey Joseph slipped up in his role as Nebraska’s interim head coach Tuesday when he responded to a reporter’s comment and question about a standout high school player who recently pledged to sign with the Cornhuskers.

Malachi Coleman, a four-star wide receiver from Lincoln East High, held an event Saturday to announce he had chosen Nebraska over five other schools. He is the highest-rated prospect in the state.

The first day he can sign his letter of intent is Dec. 21. NCAA rules prohibit coaches from commenting on an unsigned prospective recruit.

A reporter at the Huskers' weekly news conference interrupted as Joseph was answering another question.

“You got Malachi Coleman this weekend,” the reporter said.

The reporter apologized, and Joseph said, “I'm just joking. You're so uptight. But, no, right, we got Malachi."

Asked if he had spoken to Coleman since the announcement, Joseph said, "Well, he said six months ago he wasn't coming, so you put the pieces together."

Joseph smirked immediately after making the comment and as he walked out of the news conference he asked athletic department media relations staffers if he had made a mistake.

Spokesman Keith Mann wrote in an email to The Associated Press that Joseph contacted the school's compliance office immediately after the news conference to make its staff aware of the comment.

According to Bylaw 13.10.1.1 in the 2022-23 NCAA manual, an institution "is precluded from commenting in any manner as to the likelihood of the prospective student-athlete committing to or signing with that institution."