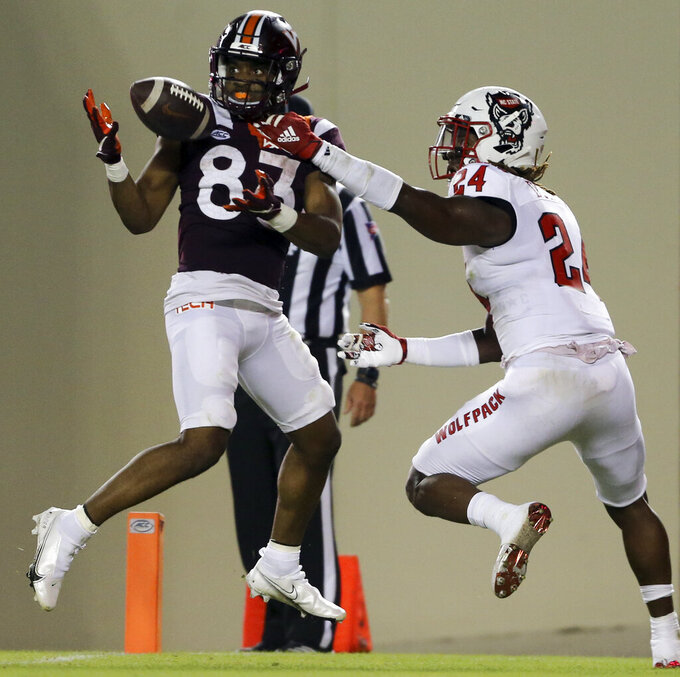 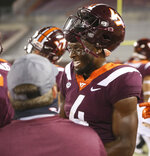 BLACKSBURG, Va. (AP) — Quincy Patterson II came off the bench to throw two touchdown passes and run for another score, leading No. 20 Virginia Tech to a 45-24 victory over NC State on Saturday night.

Despite playing without 23 players and four coaches because of coronavirus issues and injuries – including starting quarterback Hendon Hooker – the Hokies (1-0, 1-0 ACC) started quickly in a season opener delayed two weeks because of two COVID-related postponements.

Virginia Tech took advantage of an NC State defense missing three starters who were out with injuries,by speeding to a 17-0 lead.

Patterson, the Hokies’ No. 3 quarterback, entered the game in the second quarter after starter Braxton Burmeister left with a hand injury. Patterson threw touchdown passes of 15 yards to Tayvion Robinson and 16 yards to James Mitchell on the Hokies’ final two possessions of the first half. He also scored on a 1-yard run in the fourth quarter.

Khalil Herbert ran for 104 yards and a score for Virginia Tech, which rushed for 315 yards.

NC State: After winning their opener, the Wolfpack were dominated in every phase of this game. The injuries on defense hurt, and NC State needs better play at quarterback. Leary, who played in the second half against the Hokies and threw a touchdown pass, may move into a starting role.

Virginia Tech: The Hokies have been plagued with coronavirus issues over the past two weeks, but looked sharp despite numerous players missing practices. Virginia Tech did not turn the ball over, made no mistakes on special teams, and had just five penalties in a well-rounded performance.

The impressive outing by the Hokies could vault them a few spots in the next Associated Press poll.

NC State: The Wolfpack play at Pittsburgh on Saturday.

Virginia Tech: The Hokies play at Duke on Saturday.