Plenty at stake when No. 4 Ohio St hosts No. 7 Michigan St 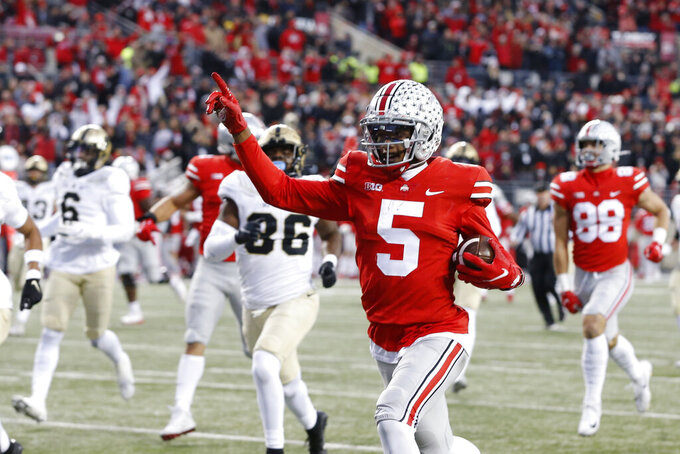 Ohio State receiver Garrett Wilson celebrates as he scores a touchdown against Purdue during the first half of an NCAA college football game, Saturday, Nov. 13, 2021, in Columbus, Ohio. (AP Photo/Jay LaPrete) 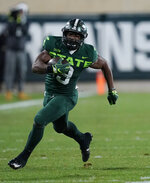 Line: Ohio State by 19 1/2, according to FanDuel Sportsbook.

Ohio State shrugged off any talk of a possible trap game last week and blew Purdue out of the Horseshoe, 59-31. The offense is humming, with quarterback C.J. Stroud completing passes nearly at will. The Buckeyes can win the Big Ten East title by beating the Spartans and then No. 8 Michigan the following week.

Ohio State’s passing game against Purdue’s defense. Stroud's average of 337.3 yards per game is best in the Big Ten and sixth in the country. Michigan State's pass defense is the worst in the conference. The Spartans allowed Purdue's Aiden O'Connell throw for 536 in their loss 40-29 loss to Purdue Nov. 6.

Michigan State: Wake Forest transfer RB Kenneth Walker has been a revelation. He's a Heisman Trophy candidate who leads the nation with 1,473 yards and an average of 147.3 yards per game. His 6.49 yards per carry average is 11th nationally.

Ohio State: After sitting out the Nebraska game, WR Garrett Wilson came back strong. He had 10 catches for 126 yards and three touchdowns and rushed for another score in the Buckeyes' 53-31 dismantling of Purdue last week.

Ohio State leads the country in scoring with 46.3 yards per game. ... Ohio State has won eight straight since losing to Oregon on Sept. 11. ... The Buckeyes have won 25 consecutive Big Ten games, which is the longest streak in the conference since the Buckeyes’ national record, 30-game conference winning streak from 2013-15. ... Michigan State handed then-No. 6 Michigan its first loss of the season Oct. 30 before the Spartans took their first loss the next week against Purdue. ... Payton Thorne threw four touchdown passes in the 40-21 win over Maryland last week. ... Michigan State senior punter Bryce Baringer leads the Big Ten and ranks third in the FBS with his 49.36-yard average. ... This will be the first head-to-head meeting between Ohio State coach Ryan Day and Michigan State coach Mel Tucker. Day didn't make the trip to East Lansing last year because he had the coronavirus. ... Buckeyes senior WR Chris Olave is just two touchdown receptions short of breaking the career school record held by David Boston (34 in 1996-98). His 11 TD grabs this year is tops in the FBS.