QB battle: Virginia is rolling, as Miami still has questions 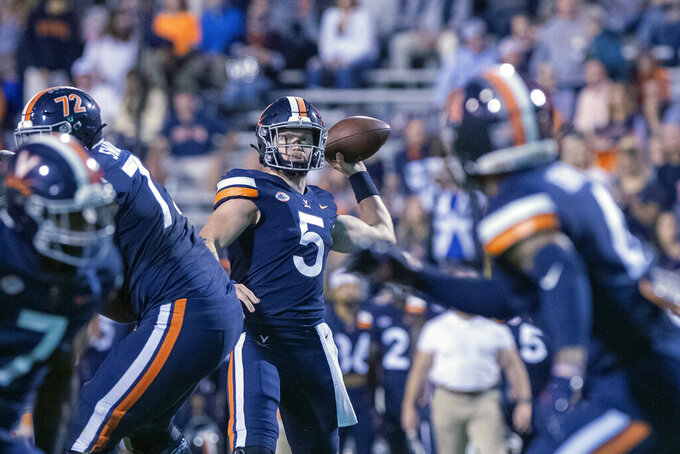 MIAMI GARDENS, Fla. (AP) — There’s no question who Virginia will start at quarterback. That’s not the case with Miami.

The Hurricanes (2-2) open their Atlantic Coast Conference schedule on Thursday night against Virginia (2-2), and will be facing the national leader in passing yards per game so far this season. Virginia’s Brennan Armstrong is averaging 426 yards per game, and though it’s early, only seven quarterbacks in FBS history have ever finished a season averaging more.

Miami’s starter remains a murky proposition. D’Eriq King’s shoulder injury is improving, but the Hurricanes still are expected to start either Tyler Van Dyke or Jake Garcia on Thursday night -- after using that combination in last weekend’s 69-0 win over lower-division Central Connecticut State.

“Based on the performance on Saturday I don’t think either Tyler and Jake deserves not to play if called upon,” Miami coach Manny Diaz said. “I think both guys did enough to show that they can move the football team and get us in the end zone.”

Armstrong is doing that and more at Virginia.

“Brennan is our leader. He’s the catalyst,” Virginia coach Bronco Mendenhall said. “There’s eight games remaining, and I love who he is, what he is and I want and need his leadership. Our team thrives off of that.”

Virginia is playing at Miami for a third consecutive season, a quirk that happened because of the way last season’s schedule — which originally called for the Hurricanes to visit the Cavaliers — had to be reworked in response to the pandemic.

Things return to normal next year when Miami goes to Virginia.

This marks the first time Virginia is visiting the same opponent in three consecutive seasons since going to Clemson in 1972, 1973 and 1974. It’s not the longest such run in Virginia history; the Cavaliers played at Georgetown in eight consecutive seasons from 1906 through 1913.

This is the fourth trip by the Cavaliers to Hard Rock Stadium in the last 23 ½ months; they also played Florida in the Orange Bowl to end the 2019 season, with the Gators prevailing. It all means Virginia has lost more games on the Hurricanes’ field since the start of 2019 (going 0-3) than it has at home in that span (going 14-2).

Because of that quirky schedule, Amari Carter and Jonathan Ford have a chance to enter the record books as the first Miami players to play in four home wins against one opponent.

Both played in the 2017, 2019 and 2020 games against the Cavaliers. Other Miami players have been on the roster that whole time, but Carter and Ford are the only two players credited with appearing in the last three home wins over Virginia.

The last three Miami-Virginia games have been exceptionally low-scoring.

Add them up, and the average score of those contests: Miami 16, Virginia 13.

But these two defenses don’t look like their recent predecessors. Average score of Hurricane and Cavalier games so far this season: Miami 31-26 and Virginia 35-28.

For the record, Miami-Virginia games all time have an average score of Hurricanes 26, Cavaliers 23.

Miami expects to see RB Jaylan Knighton make his season debut. Knighton served a four-game suspension to start the season; the Hurricanes have only revealed that it was over a violation of team rules.

Virginia has 12 players from Florida on its roster, making this trip a homecoming of sorts. The only states that more current Cavaliers call home are Virginia (obviously, with 41) and Georgia (14).