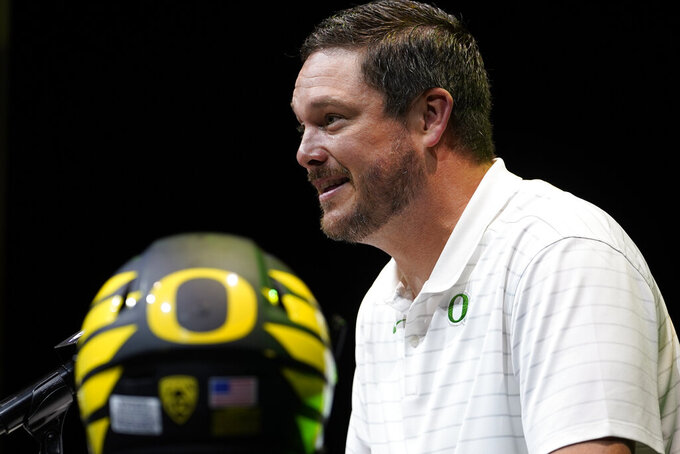 LOS ANGELES (AP) — Coaching changes in the Pac-12 are a given, but it is rare when it happens to three of the most recognizable programs in the conference.

Such is the case with Southern California, Oregon, and Washington, which have new coaches on the sideline this season. The schools have won five of the last six conference titles.

“It’s interesting and unique. That’s what makes it fun,” Washington offensive lineman Jaxson Kirkland said during the conference’s media day on Friday. “Now we have a whole bunch of different teams and schemes coming around. It will be cool to see everyone getting after each other.”

USC made waves last December when it convinced Lincoln Riley to leave Oklahoma. After Mario Cristobal left Oregon for Miami, the Ducks tabbed Dan Lanning, the defensive coordinator at Georgia.

The most significant upheaval has been at Washington, where Kalen DeBoer is the Huskies’ third coach in four seasons. DeBoer was at Fresno State.

Riley faces the most pressure to produce immediately after leading the Sooners to a 55-10 record in five seasons and two appearances in the College Football Playoff. Pressure is routine for Riley, who was 33 when he succeeded Bob Stoops at Oklahoma.

USC was picked by the media to win the Pac-12 South last year, but went 4-8 and fired Clay Helton two games into the season.

“You don’t come to USC or Los Angeles to do things small.”

With a huge assist from the transfer portal, Riley was able to rebuild the Trojans for a conference title run this season. Quarterback Caleb Williams also came from Oklahoma, while running back Travis Dye transferred from Oregon and Biletnikoff Award-winning wide receiver Jordan Addison from Pittsburgh.

Williams said he hadn’t noticed much change since Riley moved to the West Coast.

“I think he might wear some flip-flops more often, but other than that, he hasn’t really changed much. He stays him, and that’s what you love about coach,” Williams said.

This is the first head coaching job for Lanning, who was on Georgia’s staff the last four seasons. He admitted that it has been a bit of a whirlwind getting up to speed.

“Certainly, a lot of pieces go into being a head coach. You wear a lot of hats,” he said. “It’s fun piecing together the talent. It’s also about bringing in coaches that are about relationships and development.”

The Ducks, who were 10-4 last season, open against defending national champion Georgia in Atlanta on Sept. 3. They return most of their front seven on defense, including linebacker Noah Sewell, while adding former Auburn quarterback Bo Nix.

“Certainly excited about going back and seeing some familiar faces going there, getting to compete against a mentor and a friend in Kirby Smart,” Lanning said. “I know our players are certainly excited to be on a national stage early and get to play an elite opponent in Georgia. That being said, we’re really focused on right now.”

Washington is DeBoer’s third head coaching job. He was at Sioux Falls for five seasons (2005-09) and won four NAIA national titles before coaching at Fresno State the last two seasons.

DeBoer is well aware of Washington’s upheaval since its last Pac-12 title in 2018 and is trying to make sure the transition to his staff tries to be as seamless as possible. The Huskies were 4-8 last season, but return some talent, along with potential competition at quarterback between Dylan Morris, Sam Huard, and Indiana transfer Michael Penix Jr.

“You got some guys that have had multiple position coaches. If there’s anything that’s been hard, it’s just really understanding that these guys have been through a lot,” DeBoer said. “Simplifying it down, just trying to focus on winning that day is what we are trying to do, worry about the things we can control and make a name for the 2022 team.”