SDSU tries to end long streak of futility against UCLA 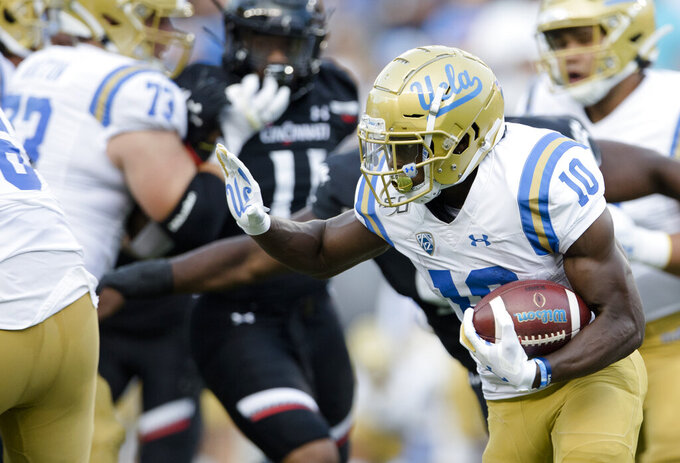 UCLA wide receiver Demetric Felton (10) runs with the ball against Cincinnati during the first half of an NCAA college football game Thursday, Aug. 29, 2019, in Cincinnati. (Albert Cesare/The Cincinnati Enquirer via AP)

SAN DIEGO (AP) — San Diego State is still looking for that elusive first victory against UCLA nearly a century after the Aztecs first played the Bruins.

Fair enough, since the last game between the schools was two seasons before Long took over at SDSU, with UCLA winning 33-14 at the Rose Bowl in 2009.

But don't tell that to Aztecs fans, who have enjoyed four victories against Pac-12 teams since 2016, including in consecutive seasons against Arizona State, and would love to be able to boast about a victory over UCLA.

Long likes to schedule at least one Pac-12 team per season, and sometimes two.

He said beating UCLA would be "No bigger than beating Arizona State or Stanford."

The Aztecs did that on consecutive weekends in 2017, winning at ASU and then beating Stanford in San Diego. SDSU beat the Sun Devils again last season in San Diego, two weeks after losing the season opener at Stanford.

"I just want to play Pac-12 guys," said Long, who was UCLA's defensive coordinator in 1996-97 prior to becoming head coach at New Mexico in 1998. "It doesn't matter who they are. I like to play against the Pac-12, since we're basically in the same recruiting region. I don't have a vendetta against the Pac-12. We recruit against the Pac-12 more than we do against any other Power 5 league. And if we can get home-and-home, we get good crowds at home."

The Bruins will visit San Diego next season and again in 2023, with the Aztecs playing them at the Rose Bowl in 2026.

UCLA has seven players from San Diego-area high schools. Among them is left guard Michael Alves, who missed the season-opening 24-14 loss at Cincinnati with a back injury. Alves' younger brother, Andrew, is a redshirt freshman fullback for the Aztecs.

That's the main reason Long downplays the lopsided nature of the series.

"That's history. It has nothing to do with this game," he said.

"They outplayed them on offense and defense, every way they could, except they turned the ball over four times, or they could have won the game," Long said. "Losing a football game because of turnovers does mean that you did not play well. Obviously the turnovers are a huge deal because they prevented you from winning. But they moved the ball well on offense and they probably would have scored two more touchdowns if they don't turn it over. They outplayed Cincinnati and they lost because they turned the ball over."

The Bruins are looking for their first win in their second season under Chip Kelly. They were 3-9 last year.

"I've heard things about people worried about them, too," Long said. "UCLA is a very good football team."

SDSU won its opener 6-0 against FCS Weber State, getting only two field goals from its new spread offense.

"We didn't play very well," Long said. "I'd like to score a touchdown. Or two or three or four."