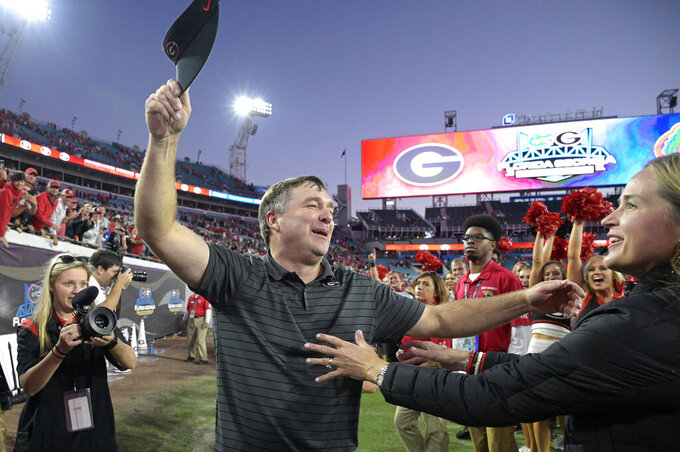 The rest of the Southeastern Conference isn't about to throw a pity party for Alabama and Georgia, no matter how many stars they lost to the NFL.

Everyone else in the league is still chasing last season's two top teams, with Jimbo Fisher and Texas A&M leading the pursuit. It hardly matters that Alabama lost some of its best offensive playmakers and Georgia must replace some of its top defenders among 15 NFL draft picks,

The preseason No. 1 Crimson Tide, third-ranked Bulldogs and sixth-ranked Aggies all have abundant talent and national championship aspirations. Georgia wound up on top last season and, like 'Bama, wants to remain regular contenders not, as coach Kirby Smart put it, “one-year wonders.”

“This program was built to be here for a long time,” Smart said.

Alabama, which lost to Georgia in the national championship game, has two of college football's biggest stars: Heisman Trophy-winning quarterback Bryce Young and national defensive player of the year Will Anderson. The Tide turned to the transfer portal to replace tailback Brian Robinson Jr. and top receivers Jameson Williams and John Metchie III.

“We have plenty of talent,” Smart said. “What we lack right now is experience.”

Alabama is still stinging from that 33-18 loss to Smart and the Bulldogs, who snapped a 41-year national title drought.

As ever, anything short of a national title at Alabama is a disappointment in Tuscaloosa. A “participation trophy” is on display in the cafeteria where the players eat as a daily reminder.

Saban recently called last season “a rebuilding year” after a massive loss of NFL talent, and this season's Georgia team can relate.

Safety Jordan Battle said Alabama is striving to remedy one apparent shortcoming from 2021.

“We're trying to get the brotherhood mentality back on task,” Battle said. “I feel like that's one thing we didn't do last year. I feel like we didn't have the leadership like the 2020 (title team's) leadership.”

Will Anderson, LB, Alabama: The 6-foot-4, 243-pounder was the national sack leader and a unanimous All-American. Plus, he finished fifth in the Heisman Trophy voting.

Kayshon Boutte, WR, LSU: Led the Tigers in receiving despite missing the final seven games with an ankle injury. Has 14 touchdowns in 16 career games. Brock Bowers, TE, Georgia: A second-team AP All-American as a freshman, Bowers had the most prolific season by a Bulldogs tight end with 56 catches for 882 yards and 13 touchdowns.

Nick Broeker, OL, Mississippi: The two-year starter at left tackle is moving to guard. Western Kentucky transfer Mason Brooks could man one of the tackle spots with Jeremy James.

Jalen Carter, DL, Georgia: Regarded as the Bulldogs' next big defensive line star, he was still a powerful force in a loaded front. Had 33 quarterback hurries and blocked two kicks despite starting just two games.

Jalen Catalon, S, Arkansas: Made 46 tackles in six games last season before a shoulder injury and intercepted two passes in the opener against Rice. Antonio Johnson, S, Texas A&M: Heads a veteran secondary after starting every game as a sophomore. Johnson had 79 tackles, including 8.5 behind the line.

Billy Napier (Florida) and Brian Kelly (LSU) are trying to turn their programs back into contenders after 6-7 seasons. With the transfer portal, the teams are all hoping to fill voids immediately with experienced players. The most prominent is South Carolina quarterback Spencer Rattler, via Oklahoma.

Auburn coach Bryan Harsin has to be atop this list even though it's only his second season. The Tigers ended last season on a five-game losing streak and then had coaching and player turnover. There don't seem to be any other head coaches in immediate jeopardy barring collapses. Missouri's Eli Drinkwitz and Mississippi State's Mike Leach both are just under .500 after two seasons but with reasons for optimism.

Alabama versus Texas A&M on Oct. 8 has it all. The Aggies handed Alabama its lone regular season loss in 2021 and then Fisher and Saban juiced up the SEC West rivalry with some offseason verbal sparring. Georgia opens in Atlanta with No. 11 Oregon, and Bama faces Texas on Sept. 10. Texas A&M hosts 16th-ranked Miami on Sept. 17.