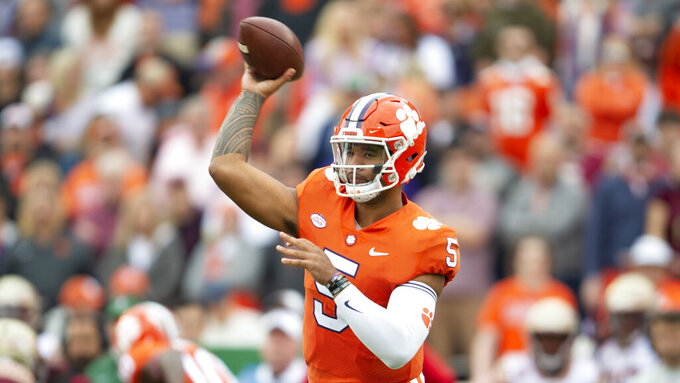 CLEMSON, S.C. (AP) — After his mistakes in a loss to Pitt, five-star freshman tailback Will Shipley vowed he'd prove he was capable of becoming a dependable and prominent part of Clemson's offense.

Shipley came through on that promise, rescuing the Tigers against Florida State.

“For me personally, I'm always happy to do what I can to help this team win,” Shipley said.

Shipley was stung by a couple of noteworthy miscues in Clemson's 27-17 loss at Pitt a week ago including a drop of a potential touchdown after he'd gotten behind the defense.

This time, Shipley led the way to bail out Clemson's struggling offense with a pair of touchdowns, including the go-ahead score from 21 yards out with 2:53 left for a 30-20 victory over Florida State on Saturday.

Shipley told teammates before the go-ahead drive the didn't want a tying field goal, but to put the game away. “That's exactly what we did,” he said.

Clemson offensive coordinator Tony Elliott believes Shipley's fire can sweep up the whole unit that's had its struggles this season including against the Seminoles.

“It was good to show everybody else he's got the heart of a champion,” Elliott said of Shipley.

The Seminoles (3-5, 2-3 Atlantic Coast Conference) were poised to snap Clemson's nearly five-year streak of success at home after Jermaine Johnson's 6-yard fumble recovery TD put them ahead 20-17 halfway through the fourth quarter.

But Clemson's mostly ineffective offense — they had three turnovers and kicker B.T. Potter missed three field goals — put together a final scoring drive helped by Florida State mistakes. A pass interference penalty on defensive back Kevin Knowles and a hit out of bounds on linebacker DJ Lundy moved the ball to the Florida State 21.

Shipley took it the rest of the way on the next snap, twisting through several defenders before lunging into the end zone. He came up screaming and mock-ripping off his shirt, Superman style.

Florida State got the ball twice more after that, but could not advance. Clemson linebacker Barrett Carter scored on the final play as the Seminoles' try at lateraling their way to a touchdown came up way short.

Shipley finished with 128 yards and had a 2-yard TD run in the first half.

Clemson (5-3, 4-2) once more prevailed amid a lack consistency on offense. D.J. Uiagalelei ended 19 of 31 for 189 yards with a touchdown and an interception.

Florida State kept things close throughout with several game-changing plays. In the first half, tailback Lawrence Toafili took a pass along the sidelines 75 yards for a score, a run he kept alive by rolling over — yet not hitting the ground — Clemson defender Sheridan Jones.

But Florida State managed just 244 yards including only 68 on the ground. Jordan Travis had two touchdown passes.

Seminoles coach Mike Norvell said his players must continue moving forward. “They showed tremendous heart,” he said. “I am proud of this football team, but we have to play cleaner there at the end.”

Florida State: The Seminoles showed strength on defense with their second-half takeaways that nearly gave them their first win at Death Valley since 2013 when then-quarterback Jameis Winston famously called the place his house after a 51-14 victory. This showing should continue to build belief in Mike Norvell's program after going 0-4 in September.

Clemson: The Tigers have to find a way to put up points after another disappointing show on offense. Clemson finished with just 377 yards, although it scored its most points this season against a FBS opponent helped by a final-play defensive touchdown as the Seminoles attempted to lateral their way to the end zone.

It was the second straight game Clemson was stung by a defensive touchdown. Pitt's SirVocea Dennis had a pick-six interception off Uiagalelei's attempted shovel pass a week ago. “We need to get a rabbit's foot to turn those tides,” Clemson's Elliott joked.

Clemson celebrated Florida State's late, national championship coach Bobby Bowden, who died this past summer. The school put the word “Bobby” in his handwriting and his large brimmed sun hat on a sideline logo. They also honored Bowden's son, Tommy, Clemson's football coach from 1999 to 2008. Tommy received a standing ovation at his first visit back since his dismissal 13 years ago.

Clemson plays its last ACC road game of the season at Louisville on Saturday.