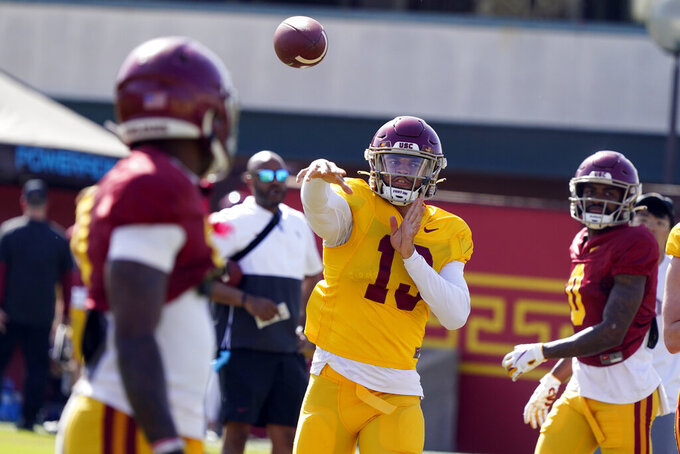 FILE - Southern California quarterback Caleb Williams (13) throws during an NCAA college football practice Tuesday, April 5, 2022, in Los Angeles. Williams isn’t a typical transfer. Rather than adapting to a new coach and an entirely new system, Williams has followed Lincoln Riley from Oklahoma to USC. So he’s playing for the same coach, albeit at a different school. (AP Photo/Marcio Jose Sanchez, File)

The Trojans brought in a young upstart with a flashy track record in former Oklahoma coach Lincoln Riley to run the production. He has assembled a star-studded roster that includes ex-Sooners quarterback Caleb Williams and the 2021 Biletnikoff Award winner in wide receiver Jordan Addison to reboot a program with several national championships and seven Heisman Trophies in its illustrious history.

The show starts with a home game against Rice on Saturday. But the success of this season and what No. 14 USC officials hope will be a long and storied tenure for the 38-year-old Riley will depend on the chemistry formed among the new faces.

Count Williams, who threw for 21 touchdowns against four interceptions as a freshman at Oklahoma, is intrigued to get a first glimpse.

“Honestly, just all of us getting out on one sideline, all being together, all fighting for one goal," he said. “That’s what I’m really, really excited to see.”

USC has 24 transfers among the 35 new players on its roster, including several proven performers on offense with strong Power 5 resumes.

The addition of Addison, who had 100 receptions for 1,593 yards and 17 touchdowns at Pitt as the top receiver in college football, blew away offensive coordinator Josh Henson.

“I was trying to think, even other than Caleb, I don’t know another time in my career that we’ve had a guy transfer in our program that I’m like, ‘Wow,’ is that proven of a player at this level. So, yeah, I mean, what can you say? That’s exciting, right,” Henson said.

But collections of gifted players don’t necessarily translate into success on the field. Quickly developing relationships between the newcomers and holdovers from the 4-8 team is key after the dismissal of coach Clay Helton early last season.

It seems to have worked as Williams and linebacker Shane Lee — no stranger to championships during his time at Alabama before coming to USC —were voted team captains.

“They could have been the ones to reject, and they were the opposite, polar opposite of that, so I’m very thankful,” Williams said. “Like I said, very grateful, and I can’t wait to get out there with them.”

The most striking position group overhaul came at wide receiver, where the Trojans brought in Addison, Terrell Bynum (Washington), Brenden Rice (Colorado), and Mario Williams (Oklahoma). Bynum brings plenty of experience from his time with the Huskies, Rice showed promise in an inconsistent Buffaloes passing game, and Williams formed a strong connection with namesake at quarterback as freshmen at Oklahoma.

“I think we definitely can live up to the hype. I think we are the top receiving room in the nation,” Rice said.

While Caleb Williams and his receivers received most of the attention, the ground game for USC also brought in exciting options. Former Oregon standout Travis Dye returned home after running for 1,271 yards and 16 touchdowns last year. Austin Jones paced Stanford in yards rushing during the truncated 2020 season. Diminutive freshman Raleek Brown could be used in multiple roles to highlight his speed.

Pass rush is arguably the biggest question mark on defense for USC. The experience Rice has at several positions on its offensive line could provide an early indication of where that group stands. Left tackle Clay Servin has started 25 straight games, and center Shea Baker will start for the fifth straight season.

Fifth-year junior Wiley Green won the quarterback competition in training camp for the Owls, who went 4-8 last season. This will be the third time Green starts a season opener at Rice, having done it previously in 2019 and 2021.