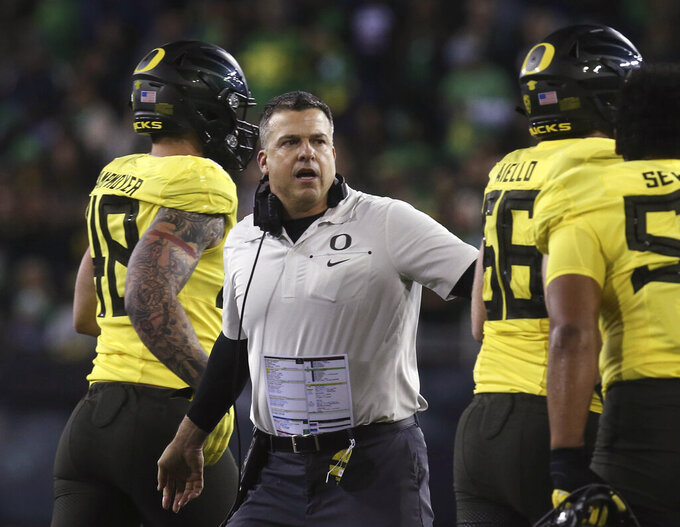 Washington has a familiar name competing at quarterback but he might not be quite ready for prime time. Oregon is regrouping a bit after last year's starter bailed for the transfer portal — something that's also happening at Utah and Arizona.

Welcome to the spring quarterback shuffle in the Pac-12.

Quarterbacks across the league were hoping to impress their coaches before everyone heads off for the summer break. At UCLA, USC, Colorado and Arizona, the starters from the coronavirus-shortened 2020 season have the upper hand.

The whole thing has been made more complicated because last season didn’t count against eligibility, so some seniors are back with new recruits streaming in. And there might be more transfer portal moves to come. Indeed, an Arizona quarterback announced his intention to transfer this week.

Here's a look at the QB situation across the Pac-12 this spring:

The Golden Bears will hold steady with senior Chase Garbers back for another season. Garbers started in each of the four games Cal played last season, throwing for 771 yards and six touchdowns with three interceptions. In Cal's spring game last month, Garbers threw for 71 yards and a touchdown. Zach Johnson is his likely backup.

Now that Davis Mills is headed to the NFL, the frontrunners for the starting nod appear to be senior Jack West and sophomore Tanner McKee. The Cardinal just opened practice this week, with their spring game set for May 22, so it may take time to notice any separation.

Jayden de Laura remains suspended because of a DUI in February, but if and when it's lifted, he will most likely be the starter this fall. Tennessee transfer Jarrett Guarantano, who has competed this spring with junior Cammon Cooper, left the team's spring game after one play because of what appeared to be a hand injury — but he was back at practice this past week.

The Huskies have a famous name in the mix: Sam Huard, son of former UW quarterback Damon Huard and nephew of Brock Huard, also a former Washington QB. Huard enrolled in school early but he will have to compete with last season's starter Dylan Morris, who appears to have the upper hand. Also in the competition is Colorado State senior transfer Patrick O’Brien. Coach Jimmy Lake has plenty of good options.

“I'm just happy that (quarterbacks) room is talented, and they're farther ahead than we were last year,” Lake said. “That's going to make our whole team better.”

Tyler Shough entered the transfer portal and is now at Texas Tech but Boston College transfer Anthony Brown opted to stay and is the Ducks' most experienced QB heading into the 2021 season. Look out for early enrollee Ty Thompson, a dual threat out of Arizona.

“Sticking it out here, I feel like, was my best option. I felt there was a lot more to take from this opportunity,” Brown said. “And we're still here, and we're still grinding.”

Tristan Gebbia is still rehabbing a hamstring injury, so the Beavers have had an opportunity to take a good look at Chance Nolan, Ben Gulbranson, and Sam Vidlak this spring. Gebbia is still the favorite to start next season. Coach Jonathan Smith said of Gebbia: "He’s in line to have himself a big-time summer.”

Oregon State's spring scrimmage is May 8.

Dorian Thompson-Robinson threw for 1,120 yards and 12 touchdowns last year, so he's the incumbent QB for the Bruins ahead of backup Chase Griffin. Ryan Gunderson has been named UCLA's new quarterbacks coach after Dana Bible retired.

Chip Kelly told reporters that Thompson-Robinson has improved in the offseason.

“The biggest competition for Dorian, honestly, is Dorian,” Kelly said. “That's the one thing I love about him, he's always constantly trying to improve, he's always asking questions, he's always trying to be the best version of himself, on a daily basis."

Kedon Slovis threw for 1,921 yards with 17 TDs and seven interceptions in USC's six games last season. He's the man again for the Trojans heading into 2021. The group behind him had a setback in the annual spring showcase when Vanderbilt transfer Mo Hasan tore his ACL.

The Wildcats picked up Washington State quarterback Gunner Cruz, who performed well this spring. It appears as this point that Cruz will battle Will Plummer for the starting job with South Florida transfer Jordan McCloud, who hasn't arrived yet. Kevin Doyle Jr. entered the transfer portal this week.

New coach Jedd Fisch said the QBs should “get ready for war" this fall.

“They’re gonna compete, and if they want to be the starting quarterback here in September then they better be ready to compete," Fisch said. "They got another guy coming in, you got a bunch of guys here and I hope they’re ready for a lot of battles to see who’s going to come out on top in September.”

Jayden Daniels is back for his junior season after the team played just four games in 2020. He figures to be among the league's top returnees at the position.

“Personally for me, no matter what, I want to leave a legacy,” Daniels said. “Going down the road, I want to win a Rose Bowl."

Jake Bentley, who started for the Utes last season after Cameron Rising was injured in the opening game, transferred to South Alabama. But Utah brought aboard Baylor transfer Charlie Brewer, who threw for 151 yards and a pair of touchdowns in the Utes' spring game and is the frontrunner for the starter's job in the fall. Utah also added Texas transfer Ja’Quinden Jackson, giving the team one of the more promising QB corps in the league.

Sam Noyer is the presumed starter going into 2021 but he's currently rehabbing from shoulder surgery. That has given Tennessee transfer J.T. Shrout and freshmen Brendon Lewis and Drew Carter a chance to show their skills. The Buffaloes' spring showcase is on Friday.