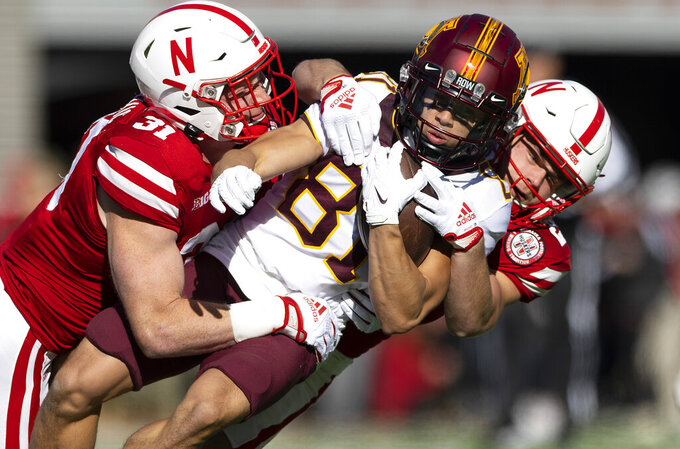 LINCOLN, Neb. (AP) — Mohamed Ibrahim rushed for 128 yards and two second-half touchdowns, and backup quarterback Athan Kaliakmanis brought Minnesota back from a 10-point halftime deficit in the Gophers' 20-13 victory over Nebraska on Saturday.

“That’s a gutsy win by a really good football team — ours,” Gophers coach P.J. Fleck said. “It was a great test of character, and I thought we passed the test.”

Kaliakmanis, who took over at the start of the third quarter after Tanner Morgan was injured on the final play of the first half, led the Gophers to scores on four of his first five possessions.

Both of Ibrahim's touchdowns were on 3-yard runs, the first tying the game at 10 and the second making it 20-10.

The Huskers got a field goal to pull within a touchdown, but they turned over the ball on downs near midfield on their final possession and the Gophers ran out the clock.

“We had to grit, grind, fight, scratch, claw, especially when a lot of things weren't going our way," Fleck said. “I'm just really proud of the result of our team, the courage of our team and the heart of our team. I think it showed we didn’t play our best football in the first half. We responded in the second half. That’s a huge win for us.”

Ibrahim, held to 18 yards on eight carries in the first half, went over 100 yards for a Bowl Subdivision-best 17th straight game. He finished with 32 carries, his third straight game with at least 30, and had no runs longer than 11 yards.

“I came out slow, and I'll be the first one to admit that,” said Ibrahim, who met with running backs coach Kenni Burns at halftime. “He had a heart-to-heart with me, and that's really all I needed. He knew that I felt that I let my team down. So it was just take it one play at a time; I'm not looking for the home run.”

Purdy made his first start in place of Casey Thompson, who was held out after injuring a nerve in his right (throwing) elbow against Illinois last week.

The Huskers scored on their first two possessions to lead 10-0. They punted on their next six series, five of which were three-and-outs. Purdy began alternating with Logan Smothers early in the third quarter.

The Huskers, who came in with the Big Ten's worst defense, held the Gophers to their fewest rushing yards (minus-7 yards) and total yards (31) in a half under Fleck. They also recorded three sacks against a Minnesota offense that had given up a Big Ten-low seven through eight games.

Morgan was injured when sacked by Ty Robinson. He had been knocked out of the Oct. 15 game at Illinois with a concussion and didn't return until last week against Rutgers.

Fleck said Morgan has an upper-body injury and gave no details. Kaliakmanis got his most snaps since playing the entire game in a 45-17 loss at Penn State on Oct. 22.

“I said this back at Penn State, the Whiteout wasn’t going to be too big for him and neither was Lincoln, Nebraska,” Fleck said. “With all due respect, he's not rattled by those things. I thought he played outstanding, and he led our football team to victory.”

Minnesota: The Gophers overcame a horrid offensive start to win for the first time in three conference road games. This ended a stretch of three of four games on the road. They appear to have found their quarterback of the future in Kaliakmanis.

Nebraska: A promising start turned into another downer of an afternoon. Anthony Grant ran for 115 yards on 21 carries, but the Huskers struggle to sustain rhythm on offense with Thompson out. They were held to a combined 40 yards in the second and third quarters, and they failed to generate 300 yards in back-to-back games for the first time since 2014.

Nebraska: visits No. 4 Michigan on Saturday.