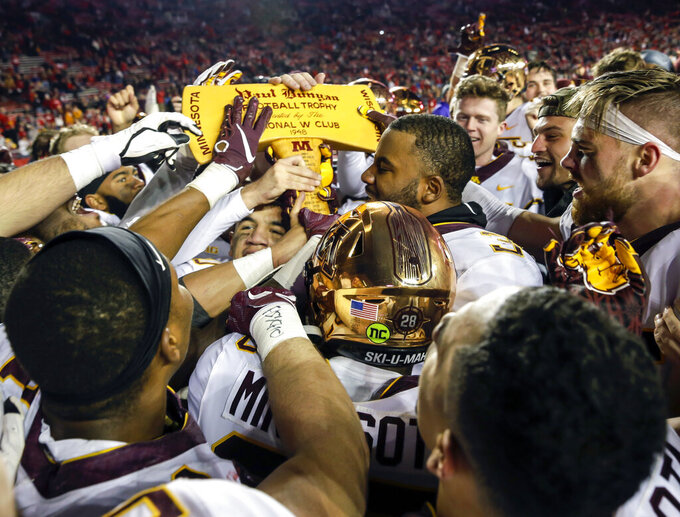 FILE - In this Nov. 24, 2018, file photo, Minnesota players celebrate with the Paul Bunyan Axe trophy after beating Wisconsin 37-15 in an NCAA college football game, in Madison, Wis. More than Paul Bunyan’s Axe is on the line in college football’s most-played rivalry. The winner of Saturday’s game between No. 9 Minnesota and No. 13 Wisconsin wins a division title, and plays No. 2 Ohio State in the Big Ten title game. (AP Photo/Andy Manis, File)

No conference loves a good rivalry more than the Big Ten.

There are 17 trophy games recognized by the conference, after all. No trophy is necessary for the biggest rivalry: Ohio State-Michigan is just known as “The Game.”

This year, however, Wisconsin-Minnesota takes center stage. The game for Paul Bunyan’s Axe on Saturday in Minneapolis will decide the West Division representative in the Big Ten championship game, the highest stakes since Wisconsin won in 1963 to beat out the Gophers for the Rose Bowl berth.

Ohio State-Michigan still is plenty important. The Buckeyes’ rallying cry this season has been to make it through the regular season unbeaten after upset losses to Big Ten opponents the last two years knocked them out of contention for the College Football Playoff.

The Buckeyes already have locked up the East Division and, as the No. 1 team in the CFP rankings, they might be able to survive a loss to Michigan on Saturday if they win the conference championship game. The Wolverines, 0-4 against Ohio State under Jim Harbaugh and losers in 14 of the last 15 in the series, would love to throw a wrench into things.

In other rivalry matchups, Iowa goes for a fifth win in a row over Nebraska in the Heroes Game on Friday; Illinois looks to clinch a winning Big Ten record for the first time since 2007 when it plays Northwestern for the Land of Lincoln Trophy on Saturday; and Indiana meets Purdue on Saturday for the Old Oaken Bucket trying to record an eighth win for the first time since 1993.

Minnesota vs. Wisconsin, 1890. It’s the longest in the Football Bowl Subdivision.

The teams played for the Slab of Bacon until the Paul Bunyan’s Axe tradition started in 1948. The Slab of Bacon trophy went missing in 1943 and was found in a storage closet at Wisconsin’s Camp Randall Stadium in 1994. By then, the Axe was all that mattered.

Wisconsin’s letter winners’ club created the Axe in 1948, with scores of the annual game engraved on its 6-foot long handle.

The longest rivalry also is the closest. Wisconsin and Minnesota are tied 60-60-8, with the Badgers winning 14 in a row before losing last year.

Minnesota-Penn State, Governor's Victory Bell. The teams had never even met in football before 1993. That was the first season the Nittany Lions played a Big Ten schedule, and Minnesota was their first conference opponent. Nowadays, the teams are in different divisions and don’t even meet every year.

Michigan State-Penn State, Land Grant Trophy. The story goes that when Penn State joined the league, schedulers decided to have these teams play the last week of the regular season as designated rivals. The logic? Both land grant universities were founded in 1855. Big Ten expansion in 2011, and accompanying scheduling issues, caused the series to go on a three-year hiatus. Since 2014, they’ve met annually as members of the East Division, but the meetings aren’t locked into Rivalry Week.

Wisconsin-Nebraska, Freedom Trophy. Nebraskans kind of get it, because Barry Alvarez played for the Cornhuskers and stole their template when he built Wisconsin into a power as coach and now as athletic director for the Badgers. The teams both wear red, too. Otherwise, no one knows exactly why this is a rivalry. Nebraska hasn’t held up its end. Wisconsin has won seven straight and eight of nine since the Huskers joined the Big Ten in 2011. The Freedom Trophy honors veterans.

The Old Oaken Bucket, the Old Brass Spittoon (Indiana-Michigan State) and Little Brown Jug (Michigan-Minnesota) are right up there with Paul Bunyan’s Axe.

But you can’t top the pig — Floyd of Rosedale.

Minnesota and Iowa have played for Floyd since 1935. That’s when Minnesota Gov. Floyd Olson suggested a bet to Iowa Gov. Clyde Herring, with the losing team giving a prize hog to the winner. Minnesota won, and a hog from Rosedale Farms in Fort Dodge, Iowa (named after the governor) was presented to Olson in his office. A trophy replaced a live pig the next year and has been claimed by the winning team since.

Ohio State 42, Michigan 39, 2006. It was the first 1 vs. 2 matchup in series history and played a day after the death of former Michigan coach Bo Schembechler. Troy Smith locked up the Heisman Trophy, passing for 316 yards and four touchdowns while leading the top-ranked Buckeyes to their first outright Big Ten title since 1984. Many media and fans called for a rematch in the BCS title game. Florida edged past Michigan in the final BCS standings, though, and beat the Buckeyes for the championship.