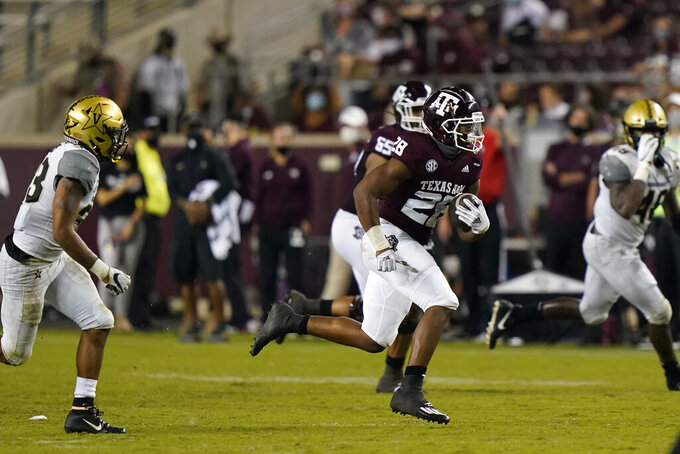 Texas A&M running back Isaiah Spiller (28) rushes for a first down against Vanderbilt during the second half of an NCAA college football game Saturday, Sept. 26, 2020, in College Station, Texas. Texas A&M won 17-12. (AP Photo/David J. Phillip)

COLLEGE STATION, Texas (AP) — Isaiah Spiller had 117 yards rushing, Ainias Smith ran for a touchdown and No. 10 Texas A&M overcame three turnovers in a mistake-filled game to beat Vanderbilt 17-12 on Saturday night in the season-opener for both teams.

Spiller had 5 five yards rushing in the first half before getting going after halftime. Smith added 51 yards rushing after switching from receiver to running back this season to steady the offense on a night when Kellen Mond fumbled twice, losing one.

The Aggies didn’t trail after the first quarter but were never able to pull away despite entering the game as 30-point favorites because of three fumbles and a penalty that resulted in a safety.

“A victory is a victory, but all three phases didn’t play how I thought we could or how we can," Texas A&M coach Jimbo Fisher said.

“We made the plays when we had to but, man too much inconsistency," he said. “We’ve just got to get them to play better and that’s my fault."

Vanderbilt started Ken Seals at quarterback, making him just the third true freshman QB to start a SEC season opener since freshman eligibility was restored in 1972. He threw for 150 yards with a touchdown and two interceptions.

“I don’t think that because we were in the game we’re feeling satisfied, but I do think it puts notice to a lot of people around the league and around the conference that this isn’t the same Vanderbilt that they’ve been playing in the past," Seals said. “Whoever we line up against, they know they’re going to get a fight.”

Spiller got things going for A&M after halftime when he ran for 57 yards on the first play of the third quarter. Texas A&M pushed the lead to 14-5 when Mond connected with Caleb Chapman on a 17-yard TD pass two plays later.

Seals threw an interception on Vanderbilt’s next drive, but the Aggies couldn’t cash in on the mistake after Mond fumbled at the end of a run on the ensuing possession.

The Commodores cut the lead to 14-12 late in the third quarter when Seals threw a perfect strike to Amir Abdur-Rahman in the corner of the end zone for a 7-yard touchdown. Abdur-Rahman had five receptions for 72 yards — both career highs.

The Aggies added a field goal early in the fourth quarter to make it 17-12. Texas A&M was driving later in the quarter when Daevion Davis forced a fumble after a reception by Jalen Preston and recovered it to give Vanderbilt the ball at their own 42.

But a pass by Seals was tipped and intercepted by Leon O’Neal. He returned it 35 yards and the Aggies got 15 more yards after Chris Pierce was flagged for a late hit when he threw O’Neal down at the end of the run while he was out of bounds on the A&M sideline.

The Aggies came away empty on their next drive when Mond fumbled the handoff on fourth-and-1. But Vanderbilt had to punt it back to allow Texas A&M to hold on for the victory.

Vanderbilt led 3-0 in the first quarter before Smith ran 25 yards for a touchdown to put A&M on top.

There were about eight minutes left in the second quarter when Andre Mintze hit Mond to force a fumble which was recovered by Dashaun Jerkins. The Commodores couldn’t move the ball and had to punt. But Brian George received a personal foul for a blind side block in the end zone to give Vanderbilt a safety to cut the lead to 7-5.

Vanderbilt was without linebacker Dimitri Moore, who led the SEC with 99 tackles last season and made the trip but did not play because of what coach Derek Mason called a minor injury. Moore, who is a Butkus Award candidate, is playing this season after changing his mind about opting out amid concerns about the COVID-19.

Despite the win, the Aggies will have to play much better if they hope to compete with the top teams in the SEC, starting next week when they visit No. 2 Alabama.

Seals showed poise and made some nice throws in his college debut and should only get better with more experience.

Texas A&M could move up a spot or two in the poll after No. 3 Oklahoma and LSU both lost on Saturday. But they might not with Pac-12 and Big Ten teams eligible now that they are set to begin play soon.

Texas A&M: Travels to Alabama on Saturday before a visit from fifth-ranked Florida on Oct. 10.