Syracuse hosts Boston College; a lot on the line for both 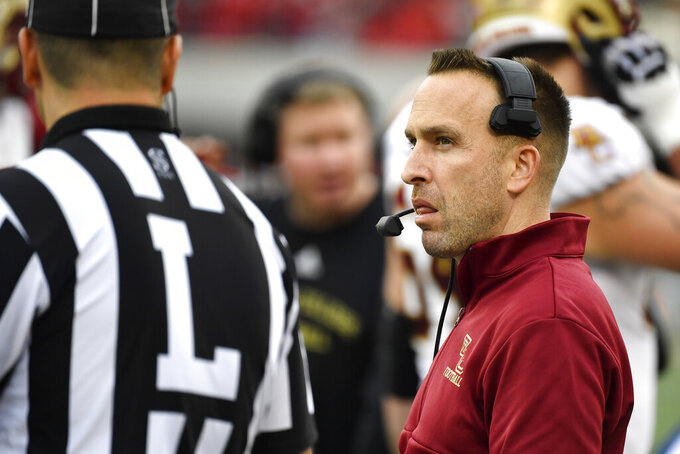 Syracuse has been living on the edge for most of the season and, in retrospect, that's been good for the team's psyche.

“We know that we’re able to play with and compete against everybody,” senior defensive lineman Cody Roscoe said. “Every game is going to be a dogfight. Games are not going to be easy. If it does come down to the end, we’ve got to be ready for the moment.”

Syracuse (4-4, 1-3 Atlantic Coast Conference) played four straight games that were decided by three points and won one before breezing past Virginia Tech 41-36 last week on the road with two touchdowns in the final three minutes.

Added coach Dino Babers: “I think it lightens the load mentally a little bit. There’s frustration about not winning."

Now comes a rivalry game Saturday against longtime foe Boston College (4-3, 0-3), which will be out to break a three-game losing streak that has left the Eagles in the cellar of the Atlantic Division. This will be the 55th meeting in the series and an important one for both teams as they chase the six wins needed to play in the postseason. BC, a 6.5-point underdog, according to FanDuel Sportsbook, has won in its last three visits to the Carrier Dome.

“Big picture. We're 4-3 and last year we were 4-3 going into the Dome,” BC coach Jeff Hafley said. “We had those three (losses) in a row. Just get over it, bury it and go play football. Do your best and see what happens on Saturday.”

Last week, BC lost 28-14 at Louisville and Cardinals quarterback Malik Cunningham completed only nine passes for 107 yards with two interceptions. But he rushed for 133 yards and three touchdowns in an offense that stunned the Eagles, who now have to contend with another mobile QB in the Orange's Garrett Shrader.

Shrader has settled nicely into his role as the starter and at 6-foot-4 and 230 pounds gives the Orange an impressive second option in the run game behind tailback Sean Tucker, who leads the nation in rushing with 1,060 yards. Shrader rushed for 137 yards, 178 and 174 in three of the past four games, the lone blip coming in a 17-14 home loss to Clemson, when he had only seven rushing attempts and gained six yards. Still, he scored once — untouched from in close after the Tigers put all of their focus on Tucker in the middle — and threw a 62-yard scoring pass to Trebor Pena late in the game.

Shrader clinched the win over the Hokies with a 45-yard touchdown pass to Damien Alford with 19 seconds left.

“Garrett’s been doing an amazing job. He’s a great leader," Roscoe said. "I just like the way he can put the game in his hands. He can sit back in the pocket, take a lick and throw a perfect dart, or if he’s got to extend the play, get out of the pocket and make something happen. It’s really amazing to watch just sitting on the sideline.”

Two years ago, BC routed Syracuse 58-27 and racked up a school-record 691 yards of offense, 496 of it rushing. Pat Garwo leads these Eagles with 605 yards rushing, averaging 6.1 yards per carry.

“It’s a big game," Roscoe said. "BC has been known for old-school, smash-mouth football. Line up and try to run it down your throat. We’ve just been focusing on being the most physical team on the field at all times.”

BC has been relying on former walk-on Dennis Grosel at quarterback. He took over after an injury to Notre Dame transfer Phil Jurkovec in Week 2. Hafley said he's decided on a starter against the Orange but won't divulge it until game day.

"We need to play better. We need to score points," Hafley said. "We need to figure out what gives us the best chance to do that.”

Boston College has outscored opponents 59-35 in the first quarter.

BC fifth-year senior center Ben Petrula, a transfer from Northern Illinois, has the second-longest active start streak in the nation at 55 games. That's one less than his counterpart on the Orange, Airon Servais.