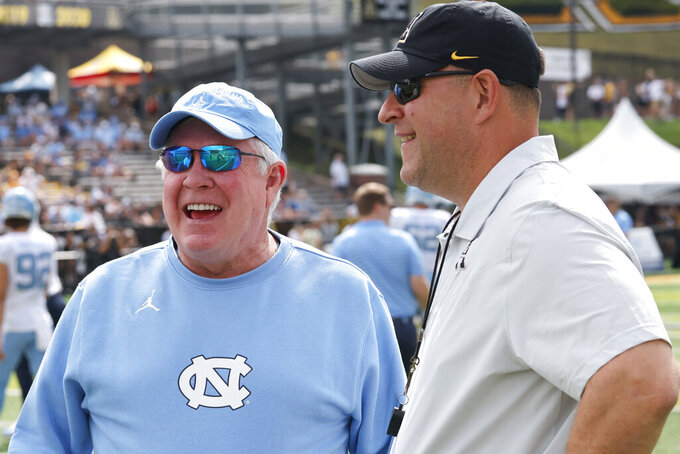 CHAPEL HILL, N.C. (AP) — Gene Chizik had seen just about everything in the more than three decades since he first took a college coaching job. That was until North Carolina's game at Appalachian State, where the Tar Heels won despite surrendering 40 points in the fourth quarter.

Now the Tar Heels' defensive coordinator is trying to determine how to fix problems that led to what he called a final-quarter “implosion" against the Mountaineers, along with issues from the season-opening win against Florida A&M.

“We know there's issues we've got to fix,” Chizik said. “That's obvious. But there's definitely a fine line between knowing what you've got to fix and panicking. I'll never be a panicker. There's certainly urgency and our players know that.”

After the 63-61 win at Appalachian State, the Tar Heels (2-0) are playing their second straight road game against a Sun Belt Conference team Saturday at Georgia State. They rank as one of the worst defenses in the Bowl Subdivision, with an offense covering for those issues behind quarterback Drake Maye.

Chizik was Brown’s defensive coordinator at Texas when the Longhorns won the national championship for the 2005 season. He also worked at UNC under Larry Fedora and turned one of the nation's worst defenses in 2014 to adequate in 2015, which was a key reason why the Tar Heels won their Atlantic Coast Conference division.

Now he has taken over a unit that allowed 32.1 points last season under Jay Bateman, finishing with a late collapse at North Carolina State followed by a bad start in the Duke’s Mayo Bowl loss to South Carolina. But unlike last time, when the Tar Heels allowed 19 or fewer points in six of the first seven games, there hasn't been a quick start.

Chizik pointed to multiple concerns last weekend. He often saw 10 players executing correctly and one player failing to do so. He saw missed tackles. He wants his secondary to play the ball better in the air. Brown noted there were seven defensive penalties.

“Nobody wants to be in position to give up 40 in the fourth quarter or have missed assignments,” defensive back Cam'Ron Kelly said. “It definitely is a surprise but it’s nothing that can’t be fixed.”

Chizik does have at least one positive to cite: the Tar Heels held the Mountaineers scoreless from the 14:18 mark of the second quarter until early in the fourth. He's hoping the team can replicate that consistency for longer.

“We're learning our guys, we’re learning what they can do and what they can adjust to, and that is an adjustment period,” Chizik said. “But for me, I've just been through too much (to panic). I hope there’s not another first. But if there is, we’ll deal with that, too.”