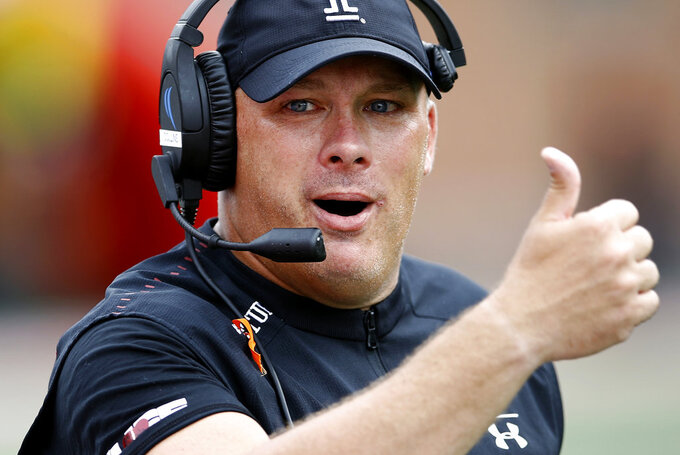 FILE - In this Saturday, Sept. 15, 2018, file photo, Temple head coach Geoff Collins gestures in the second half of an NCAA college football game against Maryland in College Park, Md. Temple is unbeaten in the American Athletic Conference, and intends to stay that way after facing skidding Navy on Saturday. (AP Photo/Patrick Semansky, File)

ANNAPOLIS, Md. (AP) — The last time Temple visited the state of Maryland, the Owls stopped a two-game skid. On Saturday, they will be looking to sustain some positive momentum.

Temple (3-3, 2-0 American Athletic Conference) faces Navy (2-3, 1-1) after winning three of its three of its last four games in convincing fashion — a streak that began with a 35-14 rout of Maryland in College Park on Sept. 15.

Navy, on the other hand, is seeking to reverse a negative trend. The Midshipmen have dropped two straight, including an embarrassing 35-7 blowout at Air Force last Saturday.

In a 49-6 rout of East Carolina last week, Owls quarterback Anthony Russo went 21 for 25 for 254 yards and four touchdowns.

Ryquell Armstead rushed for 91 yards and a touchdown on 20 carries before limping off the field in the third quarter. He returned briefly before calling it a day, snapping his streak of four consecutive contests of running for 100 yards or more. He has rushed for 626 yards for the season.

The 43-point margin of victory was the most in Temple history against a Football Bowl Subdivision foe.

"It was an impressive win against a really good opponent," Owls coach Geoff Collins said. "We were hitting on all cylinders in every phase of the game."

Asked what impresses him most about Temple's offense, Navy head coach Ken Niumatalolo replied: "Unfortunately, there's too much that impresses me. I don't know where to start. Who do you try to stop? After a tough loss you don't want to put on the tape and watch them play. That's a scary offense, and they're operating really well right now."

Some things to know about the Temple-Navy matchup:

Navy needs to regroup after losing back-to-back road games with a bye week in between.

"We've got a lot to improve on as a team. We're just not playing very well right now," Niumatalolo said.

After losing to Air Force, Navy jumps back into AAC play against a tough Temple team that won last year's meeting, 34-26.

'A very talented team, a very physical team that has always given us trouble," Niumatalolo said of the Owls.

Navy managed only 129 yards rushing against Air Force and dropped out of the national lead in that category as a result, falling into second place behind Georgia Tech.

"If they're not leading the country in rushing offense, they're definitely right up there," Collins said. "They've got some really good athletes and some tremendous schemes. Our guys understand the challenge."

Navy quarterback Malcolm Perry got bottled up by Air Force, but still ranks 11th in FBS with 116.8 yards rushing per game.

Navy and Temple have been among the most successful programs in the AAC over the past four seasons. Since 2015, the Owls (20-6) and Midshipmen (19-7) rank second and third in AAC regular season standings.

South Florida (20-5) boasts the best record in conference play during that stretch.

Two years ago, Navy and Temple played in the AAC Championship game. The Owls rolled, 34-10 in Annapolis.

HAPPY TO BE HOME

The Midshipmen are no doubt happy to return to Navy-Marine Corps Memorial Stadium, where they own an impressive 18-2 record over the past four seasons.

"We're struggling right now. We're at home and we'll need all the extra advantage we can get because we're a team right now that is searching for answers," Niumatalolo said.