Tennessee guard confident he's safer than others on campus 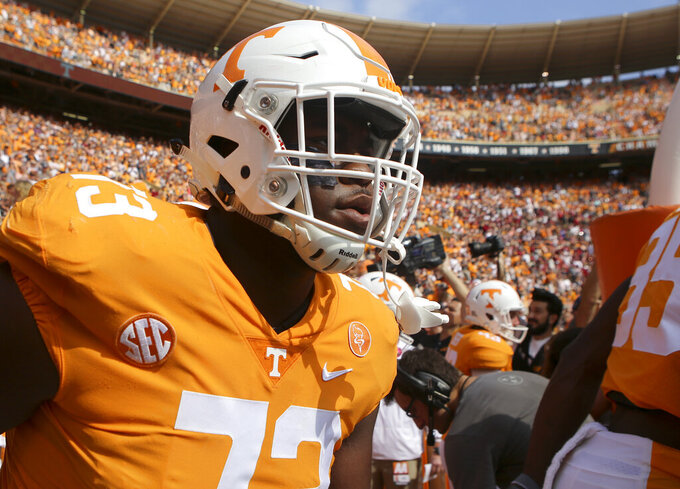 FILE - In this Oct. 14, 2017, file photo, Tennessee offensive lineman Trey Smith (73) makes his way onto the field for the Volunteers' game against South Carolina at Neyland Stadium in Knoxville, Tenn. Smith's own health history gives him all the reason he needed to opt out of the season during the coronavirus pandemic. Yet the preseason All-American is planning to play for the 15th-ranked Volunteers to improve his already high stock for the NFL draft. (C.B. Schmelter/Chattanooga Times Free Press via AP, File)

Trey Smith has dealt with blood clots, which threatened to derail his college career. The preseason All-American also has done his homework and knows blood clots are among the potential side effects of COVID-19.

“If a regular person gets COVID-19, they're at a higher risk for blood clotting disorder than I am due to the nature of what I actually take," Smith said Tuesday of his medications.

Smith's own history of blood clots gave him the only reason needed during the coronavirus pandemic to opt out after announcing his intentions in January of playing his final season at Tennessee.

Blood clots found in his lungs cost him spring practice in 2018, but blood thinners allowed him to eventually return. He missed the final five games that season when doctors worried Smith had a recurrence of blood clots before extended testing made them confident that hadn’t happened.

Doctors devised a plan to minimize Smith’s risk for blood clots to reoccur while allowing him to play. He played 13 games with 12 starts at left guard last season, earning first-team All-Southeastern Conference honors.

Now the 6-foot-6, 330-pound lineman is back to burnish his already high NFL draft stock.

"I came back to Tennessee for a reason, to prove myself, to prove that I can play at a high level consistently, so it was not really a hard decision,” Smith said.

The 15th-ranked Vols can use him. Smith has started 31 of 32 career games. But he practiced in full pads only twice all of 2019. One of those came as the Vols prepared for their Gator Bowl win over Indiana.

“I’ve been able to practice a lot more full pads, so I’m a lot further than I was this time last year in terms of my skills and development,” Smith said. “I am very thankful, and I thank God for that.”

Smith has plenty that he wants to work on this season from maintaining his pad level, leverage and how he comes out of his stance. He is determined to improve control of his own body, especially to stop overextending or lunging in pass protection.

Practices during COVID-19 have led to other challenges. Positive tests and the contact tracing protocols have kept players out of practice, though a rotating cast of linemen is something Smith is used to from previous seasons.

“I don’t think there’s been a time since I have been here that there has been the same offensive that has played consistently with each other for weeks or months,” Smith said.

That forces the Vols to listen closely to their coaches and work to be consistent and ready to play when called. Tennessee opens the season Sept. 26 at South Carolina.

That leaves trust in teammates making smart and safe decisions even more crucial than ever. Smith may be a senior and a leader on the team, but he also knows he's nobody's parent during a pandemic with so many variables on how people can catch COVID-19.

“Once again, we’ve got to rely on what Coach Pruitt’s told us: wear your mask, be safe and don’t put yourself in situations that would jeopardize yourself or this team,” Smith said.