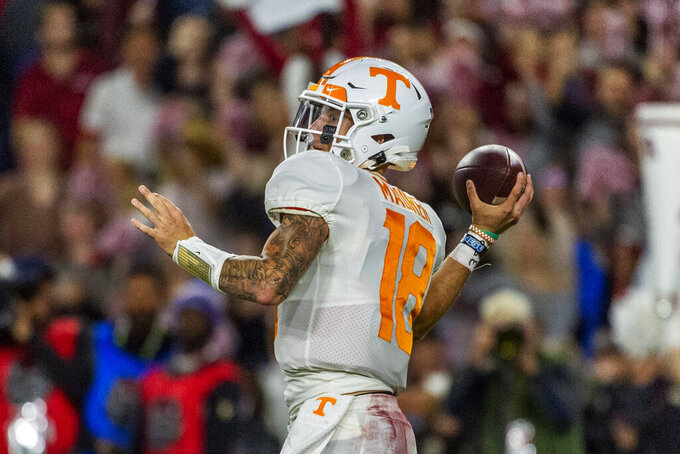 Tennessee quarterback Brian Maurer (18) throws during the first half of an NCAA college football game against Alabama, Saturday, Oct. 19, 2019, in Tuscaloosa, Ala. (AP Photo/Vasha Hunt) 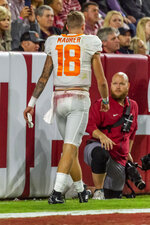 Pruitt updated Maurer's status Wednesday by noting the freshman hasn't taken any reps in practice this week. Pruitt had said Monday that he'd know more about Maurer's availability in the next few days.

Tennessee's only other scholarship quarterbacks are junior Jarrett Guarantano and redshirt freshman J.T. Shrout. Pruitt says he's giving both the same amount of reps in practice this week.

"We'll sit down as a coaching staff and we'll make a decision on what we feel like gives us the best opportunity to have success," Pruitt said.

Guarantano has made 22 career starts but got unseated by Maurer earlier this season. Shrout has never started a college game and has 10 career pass attempts in two appearances this season.

"J.T.'s a really hard worker," Pruitt said. "He continues to develop, learning exactly how to play the position. I think (quarterbacks) coach (Chris) Weinke and (offensive coordinator) coach (Jim) Chaney have done a nice job developing the young man. He continues to grow as a quarterback. We don't see it because he's not had an opportunity to really play in many games, but he'll get an opportunity Saturday and we'll see where he's at."

Maurer wasn't present for the portion of Tennessee's Wednesday afternoon practice that was open to the media. Earlier in the day, an Instagram story post on Maurer's account showed the outside of Vanderbilt University Medical Center in Nashville. The post was later deleted.

"With all of our players, we have great doctors here at the university, but just like anywhere else I've been, you always if there's a specialist somewhere, you send somebody to look," Pruitt said. "We've done it with (offensive guard) Trey (Smith). We've done it with other players since we've been here, and we'll continue to do that. We want the best care for our players that we can provide. If there's something that we think we need to send somebody somewhere else, we will."

Maurer has been knocked out of each of his three starts since unseating Guarantano as Tennessee's first-team quarterback.

Maurer left a 35-13 loss to No. 1 Alabama last week late in the first quarter. Guarantano replaced him but was benched in favor of Shrout midway through the fourth period after his fourth-and-goal fumble was returned 100 yards for an Alabama touchdown.

By Gary B. Graves 40 minutes ago
an hour ago
By Aaron Beard an hour ago
2 hrs ago
By Ralph D. Russo 2 hrs ago