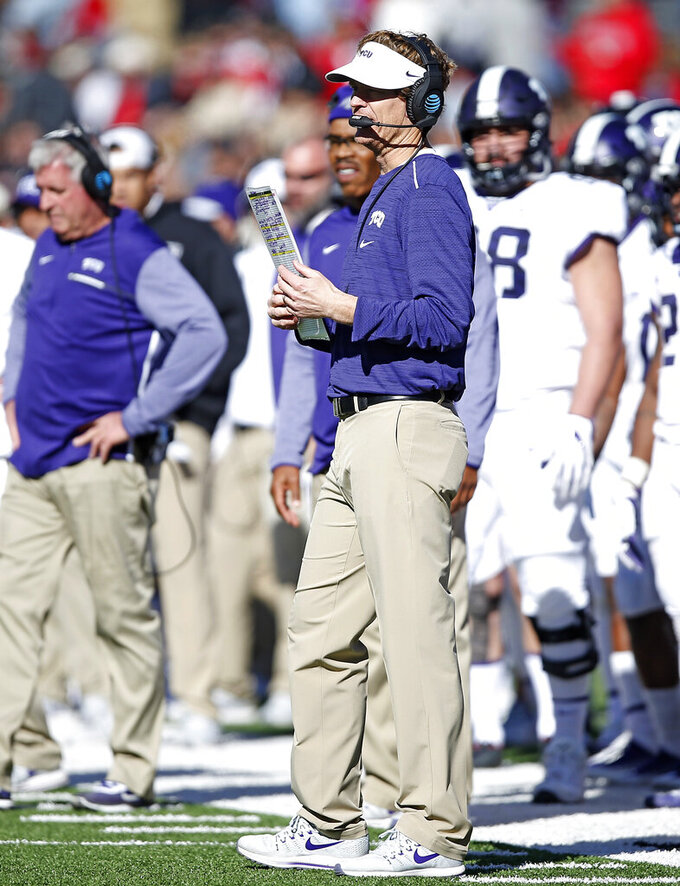 FILE - In this Nov. 18, 2017, file photo, TCU offensive coordinator Sonny Cumbie waits for the time out during the second half of the NCAA college football game against Texas Tech, Saturday,, in Lubbock, Texas. Texas Tech coach Matt Wells knew something had to change after a pair of four-win seasons with offenses not nearly up to par with what's expected from Tech fans, so Wells hired Sonny Cumbie as the new offensive coordinator. (AP Photo/Brad Tollefson, File)

Texas Tech has brought a former Red Raiders quarterback back to the Lubbock campus to call the plays for a Pac-12 championship quarterback who is expected to run them.

Third-year coach Matt Wells knew something had to change after a pair of four-win seasons with offenses not nearly up to par with what's expected from Tech fans who have watched the likes of Patrick Mahomes and Kliff Kingsbury throw balls up and down the field.

So Wells hired Sonny Cumbie as the new offensive coordinator. The former walk-on QB who threw for 4,742 yards and 32 touchdowns as a Red Raiders senior in 2004 replaced David Yost, the OC that Wells had brought with him from Utah State.

“It’s good to have Sonny back. He’s West Texas, from Snyder, Texas, obviously had a really good senior season at Tech and a career at Tech,” Wells said. “I think the vibe is really good with him and the offensive players, they’re excited. In terms of him and the quarterbacks, that’s part of the reason I do believe I chose him, is just his ability to coach and connect with those quarterbacks.”

Those QBs include 6-foot-5 junior Tyler Shough, who as a redshirt freshman at Oregon backed up NFL first-round draft pick Justin Herbert before being the Ducks starter last season when they won their second Pac-12 championship game in a row. He threw for 1,703 yards with 16 touchdowns in seven games.

“He got here in spring and he’s already showed a lot of leadership," junior receiver Erik Ezukanma said of Shough.

Ezukanma is the first Tech underclassman to lead the team in receiving yards in consecutive seasons since Michael Crabtree in 2007-08, and has fully recovered from the broken arm suffered in spring practice.

Cumbie threw for 520 yards and three touchdowns in a Holiday Bowl win over then-No. 4 California in his final game, and has since worked for every Tech head coach.

Initially a grad assistant in 2009 for Mike Leach, Cumbie became a full-time assistant the following year for Tommy Tuberville. Cumbie was promoted to co-offensive coordinator when Kingsbury became head coach in 2013 before spending the past seven seasons as co-OC at Big 12 rival TCU.

“He knows we need to play well,” Wells said. “Texas Tech means a lot to Sonny.”

Four transfer defensive backs were added this offseason who have started at other Power Five schools. The most experienced of that group is super senior Marquis Waters, who played in 49 games (35 starts) for Duke the past four seasons. There are also three juniors with three seasons of eligibility remaining: Reggie Pearson (Wisconsin), and 6-foot-3 cornerbacks Rayshad Williams (UCLA) and Malik Dunlap (North Carolina State).

Texas Tech has 12 super seniors, those players staying for an extra year since the NCAA didn’t count the pandemic-altered 2020 season against their eligibility. That’s the most in the Big 12. Defensive back Seth Collins began his college career in 2015, when as a true freshman he started seven games at quarterback for Oregon State, where he then switched to receiver in 2016 and had a season-ending injury in 2017. He played 12 games for Tech at receiver in 2018, but missed all of 2019 season because of a shoulder injury.

Texas Tech returns four starters on the offensive line, and adds a second-team All-Big 12 tackle playing on his fifth college team. Super senior T.J. Storment played last season at TCU, where the 6-foot-7, 325-pound tackle was one of the league's top offensive linemen. He initially enrolled at Old Dominion, where he redshirted in 2016 and played in 2017 before one-year stints at Fullerton College, Colorado State and TCU.

The Red Raiders have gone three consecutive seasons without a bowl game for the first time since 1990-92. The last time they had a longer postseason drought was an eight-season stretch from 1978-85.

Texas Tech opens Sept. 4 at NRG Stadium, home of the NFL's Houston Texans, against former Southwest Conference rival Houston. Its other non-conference games are at home against Stephen F. Austin and Florida International. The Red Raiders play five of their nine Big 12 games on the road, including the league opener Sept. 25 at No. 21 Texas. They go to No. 2 Oklahoma on Oct. 30, then have a bye week before hosting No. 7 Iowa State.