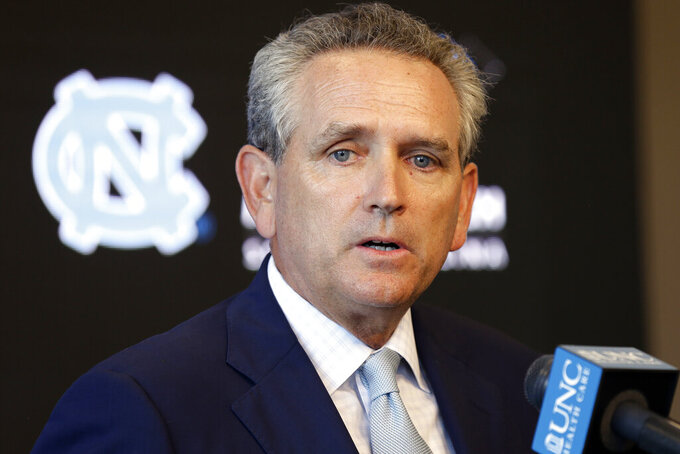 The Tar Heels enter next season with five new head coaches, including Mack Brown returning to football more than two decades after his first stint and Courtney Banghart's arrival in the first women's basketball change since 1986.

"It is a significant number, and I didn't anticipate that many in this particular academic year," Cunningham said in an interview with The Associated Press.

"I am looking out the next three to five years and know we'll probably have four or five more. I think about that, and then think about the longevity of our coaches, and we've had so many that were here 20, 30 years, 40, 50. So I think with a couple of the new coaches we've hired ... I think we've set ourselves up for really long-tenured successful coaches."

The highest-profile change came in football when UNC moved on from Larry Fedora — Cunningham's first major hire after taking over in November 2011 — following a two-year downturn and hired the 67-year-old Brown to stabilize the program.

Brown's first decade-long run here included top-10 seasons in 1996 and 1997, followed by 16 seasons at Texas that included the national championship for 2005. The College Football Hall of Famer worked in broadcasting following his 2013 exit from Texas.

He's off to a good start repairing the Tar Heels' fallen-off recruiting; they're ranked 17th for next year's class by 247sports.com.

"Our ticket sales are as strong as they've been since I've been here," Cunningham said. "We had over 3,000 new season tickets this year. We have almost a 90% renewal rate. And those numbers were steadily decreasing over the last couple of years. So he has exceeded my expectations in six months."

In women's basketball, the 41-year-old Banghart took over after leading Princeton to seven Ivy League titles and eight NCAA Tournament bids in the past decade. She replaced Hall of Famer Sylvia Hatchell, who resigned in April after an external investigation found she made "racially insensitive" comments and pressured players to compete through medical issues.

Cunningham said UNC plans to honor Hatchell, who had 1,023 career victories and guided the Tar Heels to the 1994 national championship.

"I'm not happy with how Sylvia's career here ended up, and we've got to figure out a way to honor that better," Cunningham said, adding: "She's had an incredible career, and honoring her is very appropriate."

Other changes included hiring alumnus Matt Jednak after the retirement of Ron Miller following his 52 seasons as fencing's only head coach, while Mark Gangloff took over swimming and diving after Rich DeSelm stepped down to seek treatment for a cancer-related mass.

Cunningham said he hopes the changes create "an enthusiasm, a vibrancy ... and an excitement about the future."

"What I fear and what I hope doesn't happen is when you have a transition of five, that it creates insecurity among the coaches that are here," he said. "That's not it at all, because we're trying to provide the resources for coaches and students to be successful. And then when you have the resources, then there are higher expectations. But I do try to align our expectations with our resources."

The school is finishing a $15 million building — up from a $10 million target — that will include broadcast and production space for the ACC TV channel launching next month.

Cunningham is looking at smaller-scale projects, such as improving the golf facility, upgrading the softball stadium and resurfacing cracked tennis courts. There's also long-range discussion about whether to upgrade the 33-year-old Smith Center home for men's basketball or replace it.