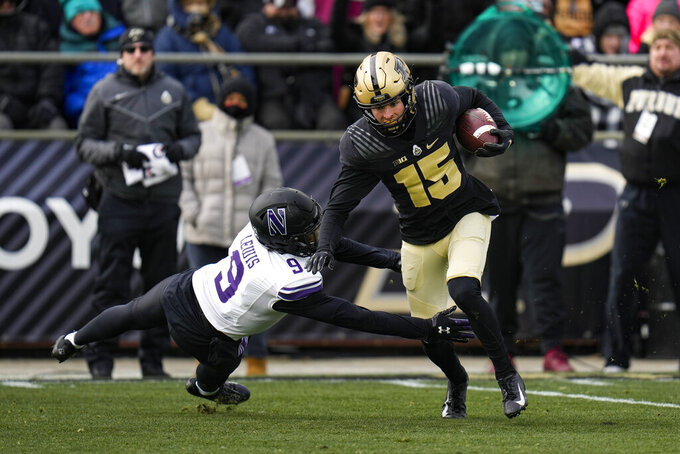 Purdue wide receiver Charlie Jones (15) breaks the tackle of Northwestern defensive back Jeremiah Lewis (9) on his way to a touchdown during the first half of an NCAA college football game in West Lafayette, Ind., Saturday, Nov. 19, 2022. (AP Photo/Michael Conroy) 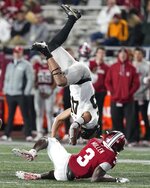 Aidan O'Connell and Devin Mockobee faced a more daunting journey — arriving on campus as walk-ons, competing against higher profile recruits and proving their worth to coaches and teammates. There's no doubt now how valuable they've become.

Purdue's leading passer, leading rusher and leading receiver all started their Big Ten careers as walk-ons and without them, the Boilermakers likely wouldn't be facing No. 2 Michigan on Saturday for the Big Ten championship.

“I think that’s what embodies this school,” Durham said. “You know Boilermakers are supposed to be hard workers, and I get picked on by Aidan because he says I got here the easy way. I came in on scholarship. Those guys had something to prove.”

The toughness and resilience of O'Connell, Mockobee and receiver Charlie Jones, who walked on at Iowa before transferring to Purdue, emerged as the heart and soul of a team that has thrived in the role of underdog.

Back in August, few thought Purdue (8-4, 6-3) could reach Indianapolis despite a favorable schedule. Back-to-back losses to Wisconsin and Iowa nearly derailed their title hopes yet here they are with a chance to upend the Wolverines (12-0, 9-0, No. 2 CFP) and their playoff dreams.

But beating up on the big guys with overachievers seems to be the norm in West Lafayette, Indiana.

The blue-collar approach also has worked in football.

Among those who decided to join the late Joe Tiller's first recruiting class were future NFL players Drew Brees and receiver Vinny Sutherland, who somehow helped Purdue avoid a potentially devastating second league loss with a late field goal to beat Michigan in Week 6 of 2000. Five weeks later, they beat rival Indiana to win their first league title since 1967.

It doesn't seem much has changed. Brohm, like Tiller, is willing to run innovative offensive concepts and bet big on guys others overlook.

Jones is a perfect example. A year ago, he was the Big Ten's top kick returner. This year, at the urging of O'Connell, Purdue took a chance on Jones and he wound up with 97 catches — nearly five times his previous career total — and 1,197 yards and 12 TDs.

“I think they do a good job finding players that want to win and once they get in the program, we preach hard work,” said Jones, who played at Buffalo before Iowa. "Everyone’s treated the same, everyone’s given that same opportunity and the best players are going to play.”

The sixth-year quarterback started No. 8 on the depth chart and wound up becoming the first walk-on to start at the “Cradle of Quarterbacks.” He's steadily climbed the school's career passing charts, earned all-conference honors and after an inspirational performance following the death of his oldest brother, Sean, last week, he's now one win away from joining Brees and Mike Phipps as the only Purdue quarterbacks to win a Big Ten crown since 1953.

“Obviously, he's gotten better at football but in the role of being a leader and how he’s become respected and viewed by guys on the team, it’s really been a transformation," linebacker Kieren Douglas said. “People really look up to Aidan for inspiration. He watches film all the time and brings the team together in such a cohesive fashion it's been really cool to see.”

Mockobee followed a different course, first committing to play at Navy before rethinking his decision and attending his “dream school.”

He didn't take a snap in 2021 and was pressed into duty early this season when King Doerue got hurt. But from the moment the 6-foot, 195-pound back they call “Crazy Legs” took the field, he's been running over and around defenders, providing Purdue with a presence they'd lacked.

Now, those three — plus Durham whose scholarship offers were sparse — have Purdue on the precipice of achieving a goal even bigger than they could have imagined when they opted to give the Boilermakers a shot by beating an opponent filled with some of the nation's best recruits and rocking the college football world.

“We’ve got a great group of guys, it's their football team,” Brohm said. “They’ve earned the ability to get to this game by being able to handle adversity. That is what you've got to do.”