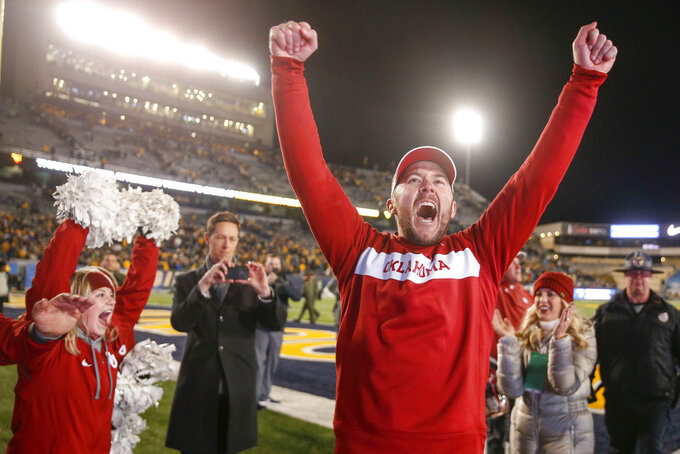 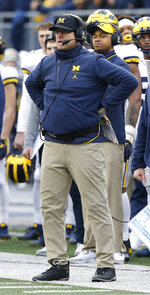 The twist the playoff race has been waiting for came Saturday. The debate, for now, is between Ohio State and Oklahoma.

History suggests it was inevitable. The top four had never stayed the same for three straight weeks until this past one, and to expect it to hold steady for two more was unrealistic.

Still, how thoroughly No. 10 Ohio State dismantled No. 4 Michigan was startling, and it could cause the College Football Playoff selection committee to rethink a lot of what has happened so far with the Buckeyes. We could be heading toward a Big Ten vs. Big 12 in the board room where the committee meets. The essential questions: Which team has the worse defense, No. 6 Oklahoma or Ohio State? Does hanging 62 points on No. 4 Michigan make up for allowing 49 to Purdue? The Buckeyes have done both.

How far the Buckeyes (No. 10 CFP) move up Tuesday could be telling and important. They should go past Washington State, which was sitting at eighth but lost the Apple Cup on Friday to Washington. But can they bounce all the way to sixth, edging ahead of the Sooners, who beat West Virginia to reach the Big 12 title game? Kyler Murray and Oklahoma have won four straight games in which they have allowed at least 40 points. The Sooners' defense is terrible. Ohio State's has been a little better.

Ohio State gets No. 20 Northwestern (8-4) next week in Indianapolis to make one more statement. The Sooners (11-1) get a rematch with Texas (9-3), with a chance to avenge a three-point loss in October.

Aside from the ugly loss at Purdue, the Buckeyes have had close calls against Nebraska (4-8) and Maryland (5-7). The Sooners dodged upsets against Texas Tech (5-7) and Oklahoma State (6-6).

Neither Ohio State nor Oklahoma looks championship caliber, but the playoff needs four teams and those two might be the choices.

One of the four playoff teams is pretty much set. Quarterback Ian Book and No. 3 Notre Dame completed a 12-0 season by gritting out a victory at Southern California. There has been some 2012 flavor to this Notre Dame season, with a few close calls against so-so teams. The USC game was not inspiring.

And of course, any mention of the 2012 Fighting Irish brings back memories of the noncompetitive BCS championship game against Alabama. Could we be heading for a redux? Well, first off, it is way more likely Notre Dame plays Clemson than Alabama.

Clemson has looked Alabama-ish at times, though not Saturday night when the Tigers gave up 510 yards passing in a lopsided victory against South Carolina.

This Notre Dame team seems better and deeper than the 2012 team. Also, better coached. That could help. The reality is Alabama and Clemson appear to be a good deal better than everybody else in the country and whether it's Notre Dame or Ohio State or Oklahoma, there is a good chance neither semifinal will be particularly competitive.

The Irish earned their spot even if the end result isn't pretty.

Jim Harbaugh has led Michigan out of the darkness that was the Rich Rodriguez and Brady Hoke eras, but even those failed hires in Ann Arbor never produced an embarrassment like this: 62 points, the most ever allowed by the Wolverines in a regulation game, against the rival against which Michigan judges itself.

Michigan will go to a glitzy bowl with a chance to win 11 games and finish in the top 10, but getting exposed in every way possible by this Ohio State team should make Harbaugh question everything. Harbaugh has accomplished much at his alma mater except the most important thing: The gap between the Buckeyes and Wolverines is still vast.

Murray's magnificent performance against West Virginia on Friday night breathed some life into the Heisman Trophy race, but Tua Tagovailoa answered on Saturday with maybe his best performance of the season.

The Alabama quarterback was 25 for 32 for 324 yards and five touchdowns in the Iron Bowl against Auburn. Tagovailoa also ran for a score.

The case for Kyler is a little weird: Oklahoma's defense is so bad that Murray faces more pressure to deliver than Tagovailoa, whose team has yet to play a close game. It's true, but it doesn't seem fair to hold Alabama's dominance against Tagovailoa.

Tua should still be considered the favorite heading into championship weekend. If he comes up big against No. 5 Georgia in the SEC championship game, Tagovailoa will become the first Alabama quarterback to win the Heisman.

Who else could be invited to New York City for the Heisman presentation? Ohio State's Dwayne Haskins' stock is up. Washington State's Gardner Minshew's stock is down. Will Grier of West Virginia still should be under consideration. And that's probably about it.

PLAN B — AS IN BROHM

What to make of Purdue coach Jeff Brohm's declaration after the Boilermakers became bowl eligible against Indiana?

"I want Louisville to do what's best for them," Brohm said. "I'm a fan. But right now I'm the coach at Purdue and this is where I want to be and I like it here." After a rivalry game, what else can Brohm say?

Brohm grew up in Louisville and was a star quarterback for the Cardinals, who are in the market for a new coach. There is no doubt Brohm is the coach Louisville fans want. If Brohm does indeed want to stay in West Lafayette, Indiana, if he is too loyal to his team and the school to bolt after just two seasons, we should all know quickly.

Purdue and Louisville are both done playing and with the early signing period looming Dec. 19, there is no reason for an extended courtship. It should take only a few days for Louisville to know if it must move on to Plan B, whatever that might be.

AROUND THE COUNTRY: LSU got no help from the officiating and lost a record-tying seven OT game at Texas A&M. The loss might cost the Tigers a spot in a New Year's Six game to Florida, which also finished 9-3 and beat the Tigers ... Kliff Kingsbury probably made the decision easier for Texas Tech by losing to Baylor to finish 5-7. Kingsbury is 35-40 overall and 19-35 in the Big 12 in six seasons at the school where he played quarterback. It is likely change is coming in Lubbock ... Also in trouble: North Carolina's Larry Fedora after Tar Heels finished 2-10. ... Safe: Rutgers coach Chris Ash. ... Teams that finished strong with bowl eligibility on the line and grabbed a sixth victory: Wake Forest, Tulane, TCU and Baylor. Kansas State, on the other hand, blew a 17-point fourth-quarter lead at Iowa State to miss out on a sixth victory. Could that have been Hall of Fame coach Bill Snyder's last game at Kansas State?