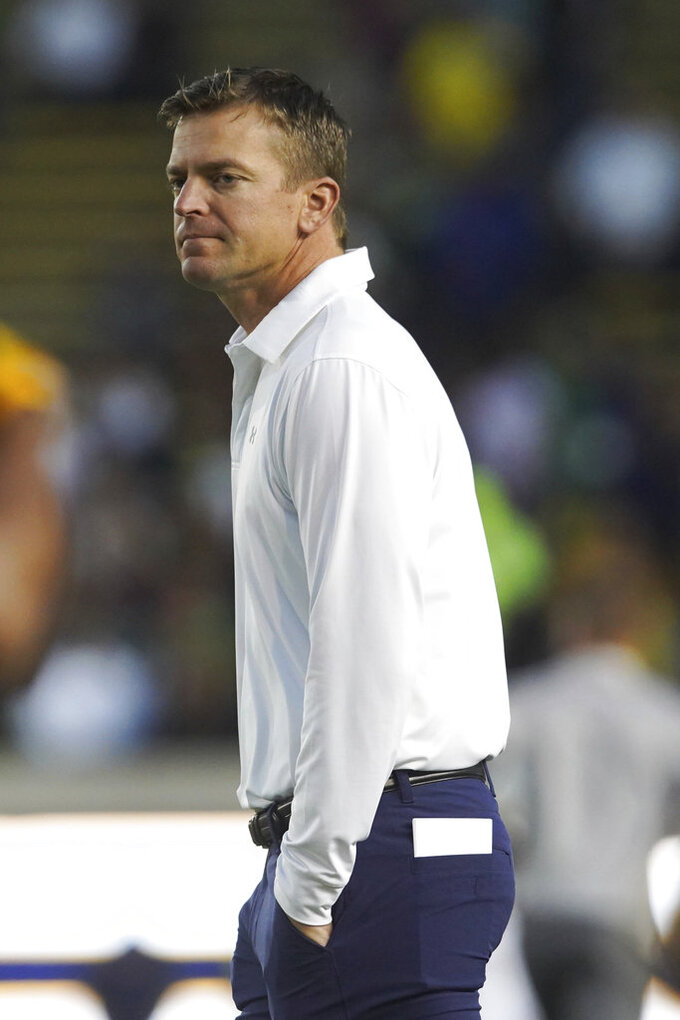 The California Bears made a brief appearance in the national rankings before slamming back to earth with a 42-24 home loss to Oregon last weekend.

The status of Wildcats quarterback Khalil Tate remained uncertain after coach Kevin Sumlin acknowledged the backups were getting more reps than usual in practice. Tate, who burst onto the scene a year ago with some breakaway running performances, has an ankle injury that has reduced him to a pass-only quarterback.

There is a school of thought that it would be better to sit Tate and allow his mobility to return.

Sumlin said the evaluation will be ongoing.

"During the week, in consultation with our trainers and our medical staff, we're never going to put anybody in harm's way," he said.

The Bears are expecting Tate.

Here are some things to consider when the Bears visit the Wildcats:

"We're not chasing ghosts," he said. "We're just trying to play better. We're not cursed. We don't need to get involved in any witchcraft or anything like that. We just need to go play better. That's the key to the whole thing."

The last two games between the teams have been wild ones. Arizona won 45-44 in double overtime last season in Berkeley. In 2014, the Wildcats beat the Bears 49-45 with a Hail Mary pass at the finish. Arizona has won the last four games of the series.

LOTS OF RUNNING: Both teams can move the ball on the ground.

Brandon McIlwain rushed for 123 yards against Oregon, becoming the first Cal quarterback to top 100 yards rushing in a game since Joe Kapp in 1958. McIlwain is averaging 6.6 yards per carry.

The Wildcats running game centers on J.J. Taylor, but the speedy back was held to 50 yards on 18 carries against USC.

Still, the 5-foot-6 back has Cal's attention.

QUARTERBACK TANDEM: Cal continues to have a two-quarterback system, with McIlwain sharing time with Chase Garbers.

"We always look at it through the lens of what's going to help our team," Wilcox said. "Right now those two guys are doing a good job. Obviously have to play better and can't turn the ball over like we did a week ago, and they'll learn from that. Both of them have really good attitudes about it. They're both making progress as players."

Both had their problems against Oregon.

Garbers completed four of nine passes and was intercepted twice.

Although he rushed for 123 yards, McIlwain threw two interceptions and fumbled the ball away once.

IMPROVING DEFENSE: Arizona ranks 10th in the conference in yards allowed per game and 11th in rushing yards allowed but Sumlin saw a big improvement against USC.

"The first thing was defensive stops," he said. "Our defense in the second half, really the fourth quarter was as good as it's been all year."

The Wildcats changed their defensive line personnel for the USC game, going with a front of P.J. Johnson, Dereck Boles and Finton Connolly.

"We went with our three biggest, best guys in this game last week instead of the rotation," Sumlin said.

LAST VISIT: Cal's last visit to Tucson, in 2014, was a memorable one, at least for Arizona and its fans.

On the final play of the game, the redshirt freshman Solomon completed a 47-yard touchdown pass to Austin Hill for the victory.