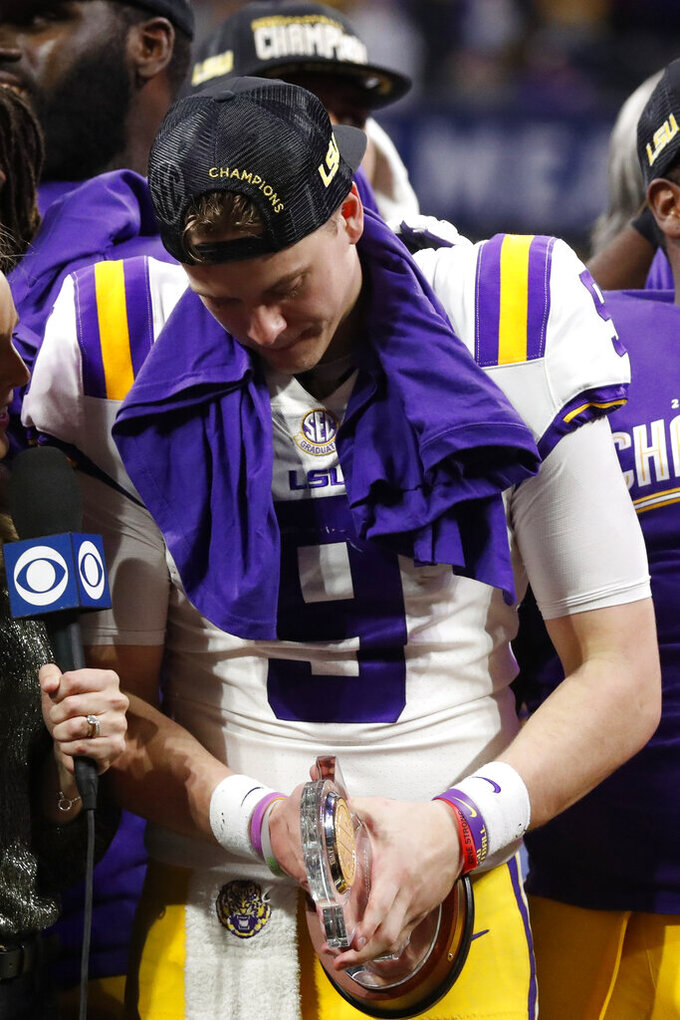 ATLANTA (AP) — The team that vanquished Alabama vs. the quarterback who left the Crimson Tide.

The Tigers got the nod after their impressive 37-10 victory over then-No. 4 Georgia in the Southeastern Conference championship game, held less than 24 hours earlier in the very same stadium where LSU will return in three weeks for its first appearance in the 6-year-old playoff.

“We're fortunate to go back to Atlanta,” LSU coach Ed Orgeron said. “I feel like we'll have a lot of fans there. It worked out in our favor.”

With Utah and Georgia going down, Oklahoma moved up to take the final playoff spot after beating Baylor 30-23 in overtime for the Big 12 championship.

This will be the fourth playoff appearance for the Sooners, though they have never advanced past the semifinals. Last season, they lost to Alabama 45-34 in the Orange Bowl.

“It's all about this team, this match-up right now,” Oklahoma coach Lincoln Riley said. “You're going to play great teams, You have to play really well to beat the other teams. That's how it should be. This is important. It's a good accomplishment. But it's certainly not our end goal.”

Alabama failed to make the playoff for the first time since it was launched in 2014. LSU handed the Crimson Tide its initial loss with a 46-41 victory in Tuscaloosa, and Bama's final hope of stealing a postseason spot ended with a bitter setback to Auburn in the regular-season finale.

Hurts guided Alabama to a pair of national championship games in his two seasons as starting quarterback. But he was replaced by Tua Tagavailoa during the 2018 title game against Georgia, watching as the left-handed freshman led a comeback for an overtime victory.

Tagavailoa took over as the starter last season, forcing Hurts to serve in a backup role for his junior year. After graduating from Alabama, Hurts transferred to Oklahoma for his final college season — and wound up back in the playoff with an enormously successful campaign.

The dual threat passed for 3,634 yards with 32 touchdowns and just seven interceptions, while rushing for 1,255 yards and 18 TDs.

Burrow threw for 349 yards and four touchdowns against Georgia, pushing his season total to 4,715 yards passing with 48 TDs and just six interceptions. He also turned in one of the signature plays of the season, spinning to his left and then to his right to get away from two defenders before delivering a pass that went for 71 yards.

Indeed, there should be no shortage of scoring in this game.

LSU is the nation's third-highest scoring team at 47.8 points per game. Oklahoma isn't far behind, ranking fifth at 43.2.

The Sooners are the only team in the playoff field with a loss. They were upset by Kansas State 48-41 on Oct. 26, essentially putting Oklahoma in a must-win situation the rest of the way.

It was a tightrope, to say they least. The Sooners edged Iowa State 42-41, rallied to beat Baylor 34-31 and survived TCU 28-24. Then, in the Big 12 title game, they needed an extra period to beat Baylor again in a rematch.

Oklahoma also required some outside help.

The Sooners got it from Oregon, which routed Utah in the Pac-12 championship game to snuff out the Utes' playoff hopes, and LSU, which ruined Georgia's bid to give the SEC two teams in the playoff.

There's not much history between these storied programs. Their only two meetings were both at the Sugar Bowl — first in 1950, when Oklahoma romped 35-0 to complete a perfect season under Bud Wilkinson, and again in 2004, when Nick Saban-coached LSU wrapped up the BCS national championship with a 21-14 victory over the Sooners.

It's highly doubtful they would have met again on such a big stage if not for their vagabond quarterbacks. Burrow started his college career at Ohio State, but transferred to LSU looking for more playing time.

“You have to have good quarterback play to get in the playoff and win it all,” Riley said. “Jalen had a very positive impact on our program. It's rather unique. We're not talking years. It's been months. It's been kind of fast and furious, but it's been very positive.”

LSU feels the same way about Burrow, who is expected join Billy Cannon from 60 years ago as the only LSU players to claim college football's top individual honor.

“Joe is one of the most important recruits we've ever had at LSU,” Orgeron said. “We couldn't have had the success we've had without him.”