Coan's status for No. 9 Irish up in air vs No. 7 Bearcats 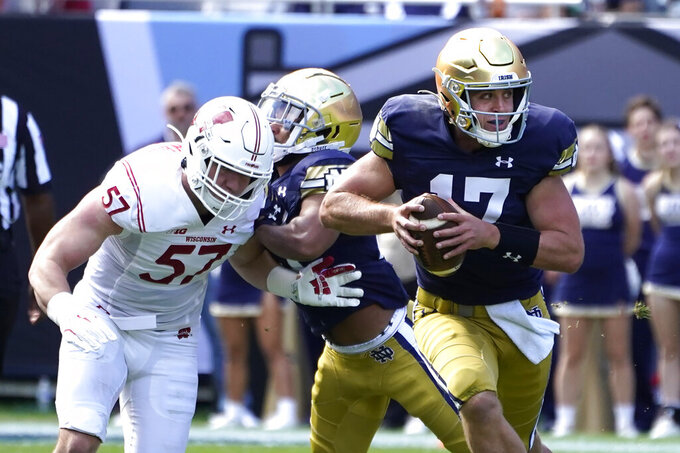 Coan suffered a severe sprain to his left ankle in the third quarter of Saturday’s 41-13 victory over Wisconsin at Soldier Field in Chicago. He was replaced by redshirt freshman Drew Pyne because true freshman Tyler Buchner was unavailable because of hamstring issues.

“If Jack is healthy, Jack would be our starter,” Kelly said Monday. “Tyler felt really good (Sunday) at treatment so that’s good for us. I think (Tuesday) we’ll make a decision on how (Coan) feels and how he looks.”

If Coan can’t go, Pyne would be the starter and Buchner would be the backup against the Bearcats (3-0) who are coming off a bye week, Kelly said.

“It’s a two-quarterback situation – it just depends on what two from that standpoint,” Kelly said.

Pyne completed six of eight passes for 81 yards, including a 16-yard TD pass to Kevin Austin during a 31-point fourth quarter. The Fighting Irish (4-0) roared back without Coan, who had thrown for 158 yards and was sacked five times by his former Badgers teammates.

In four games, Coan has thrown for 986 yards and nine touchdowns, but he has been sacked 19 times playing behind an inexperienced offensive line.

“The offensive line is under scrutiny right now and, look, they have to play better,” Kelly said. “But not all that is on the offensive line. The ball has got to come out on time. There are certain situations where the ball needed to get out in a timely fashion, and it didn’t.”

Kelly attributed part of the 6-foot-3, 223-pound Coan’s sack issues with the fact that he’s now playing out of the shotgun after taking mostly direct snaps from under center at Wisconsin.

“He wasn’t brought up in a shotgun offense, so there’s a bit of a transition,” Kelly said.

The 5-foot-11, 200-pound Pyne showed poise in the pocket on his TD pass, looking left to create room in the Wisconsin secondary to his right which Austin was able to exploit to find an opening. Pyne, who was sacked once, made quick decisions.

“When you recruit somebody that’s standing on the yellow pages to be 6-foot-1,” Kelly joked, “you’ve got to see it and the ball’s got to come out, and (Pyne’s) really good at that stuff.”

Better play from the offensive line, which saw a fourth player take snaps this season at left tackle in true freshman Joe Alt, would help the quarterbacks but also the anemic running game.

“We got to be a little more consistent on the left side certainly,” Kelly said. “They’re a little bit inexperienced. But this isn’t let’s throw the o-line under the bus. Everybody has to pitch in here – coaches, players – we all got to get better.”