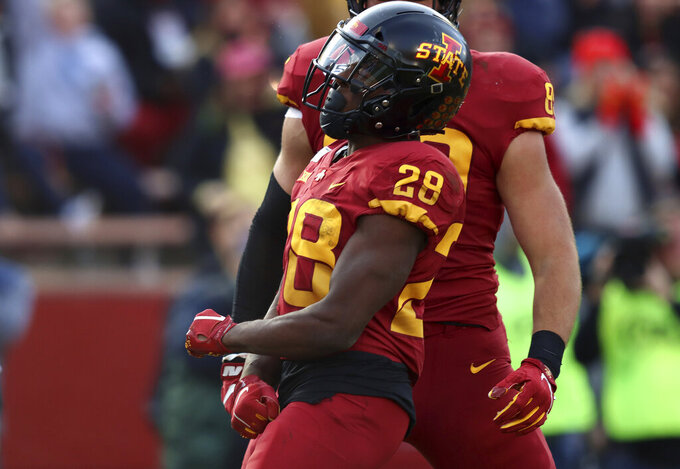 AMES, Iowa (AP) — Iowa State entered this season with its highest expectations in years. The next two weeks will determine if the Cyclones can meet those lofty goals.

Iowa State is two games behind league-leading Baylor with four games to go. The Bears also still have Texas and Oklahoma on their schedule, and if the Cyclones can bounce back and sweep the league's blue bloods they'll be back in the hunt for a spot in the Big 12 title game.

"November is where you want to be your best. You want to play really meaningful games," Iowa State coach Matt Campbell said. "You want to be playing important games in November. "Here we are. This team has given itself that opportunity to do that."

Campbell said the biggest key to the bye week after playing on seven consecutive Saturdays was to rest and get healthy. The week off wasn't enough to get back star defensive end JaQuan Bailey, who suffered a leg injury in late September. Campbell said last week that Bailey will now seek a medical redshirt.

But junior safety Greg Eisworth, perhaps Iowa State's most important player outside of Brock Purdy, used the bye to overcome a shoulder injury that forced him to leave during the first quarter of the Cyclones' 34-27 loss to Oklahoma State on Oct. 26. Campbell said Eisworth, a first-team All-Big 12 pick a year ago, will be available against the Sooners on Saturday.

The Cyclones struggled with Eisworth on the sidelines, allowing a season high for points and its two longest passing plays of the year.

"It's not only just his physical characteristics and how he plays. It's his leadership," safety Justin Bickham said of Eisworth. "Even though he's a junior, he acts like a senior, and he's probably acted like a senior since he's been here...he brings a certain type of energy that players gravitate toward."

Kolar has emerged as one of the best players in America at is position, and the Cyclones are likely to feature him more than ever in the season's final month.

The 6-foot-6, 250-pound Kolar set career highs with eight catches for 88 yards against Oklahoma State. Kolar is now fourth nationally among tight ends at 60.8 yards a game and he's eighth with five TD grabs — all of which came in the last five games.

"Charlie is a really good athlete," Campbell said. "I think you see this in the (NFL) and it's trickled down to the collegiate game that, at that position, if you've got a guy that can certainly be a matchup challenge for the defense, that guy can...be really successful."