Defensive line has No. 6 Notre Dame sitting in first class 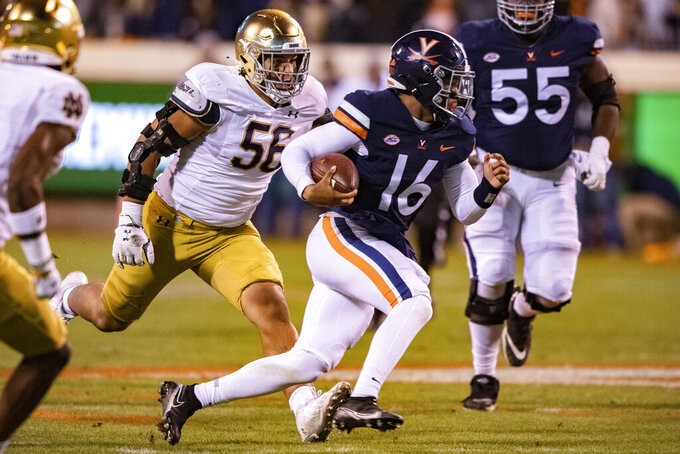 Virginia quarterback Jay Woolfolk (16) runs out of the pocket for a gain against Notre Dame during the first half of an NCAA college football game on Saturday, Nov. 13, 2021, in Charlottesville, Va. (AP Photo/Mike Caudill)

It isn’t often you get to stick out your tongue at your position coach. But that’s what Hinish, a fifth-year “super senior” because of the pandemic, did to veteran Irish defensive line mentor Mike Elston after the sixth-ranked Fighting Irish (CFP No. 8) recorded a season-high seven sacks against the Cavaliers in improving to 9-1.

Elston had promised to give up his seat in first class to the player who sacked Virginia quarterback Brennan Armstrong, the nation’s total offense leader, more than two times. Although Armstrong did not play because of sore ribs, Elston kept the promise in place.

Well, someone did: sophomore Rylie Mills, normally a defensive tackle but pressed into defensive end duty against the Cavaliers when the flu bug hit the Irish beefore Saturday's game. It wound up being another standout game for a unit that has been a relatively consistent strength for Notre Dame and has certainly been stepping up in first-year defensive coordinator Marcus Freeman’s aggressive and attacking defense.

Hinish has played in a school-record 58 games over five seasons during which Notre Dame has gone 52-9 heading into Saturday’s home finale against Georgia Tech. He has enjoyed his time under Elston since playing as a freshman in 2017.

“(Elston) changed our culture,” Hinish said. “The guys in the defensive line room I consider them my family. They’re my brothers, and I would do anything for my brothers. We play for one another when we step out on the field. That’s the mentality that he built and instilled within us.”

Coach Brian Kelly has witnessed it even longer.

“Mike does a great job every year,” he said of the 47-year-old Elston, a former outside linebacker at Michigan who first worked with Kelly at Central Michigan and later at Cincinnati before they moved together to Notre Dame prior to the 2010 season. “Mike does a great job making sure that they’re all involved in some fashion.”

“We have so much depth,” Hinish said.

They all get playing time, and their freshness is why Notre Dame has limited the opposition to just 134.2 rushing yards a game.

None of them is tougher than Hinish, who has battled through migraines that forced him to miss two games this season, including the loss to Cincinnati that ended Notre Dame’s 26-game home winning streak. With Hinish in the lineup, the Irish are 30-3 at Notre Dame Stadium.

His teammate, Mills, ended up with a seat in first class last weekend for the flight home. His position coach, meanwhile, was in coach.

“(Elston) was probably 15 rows behind me,” Hinish chuckled. “I was sitting there looking back and laughing at him. I stuck my tongue out at him. I told him, ‘If you need anything, I’ll be up here.’”