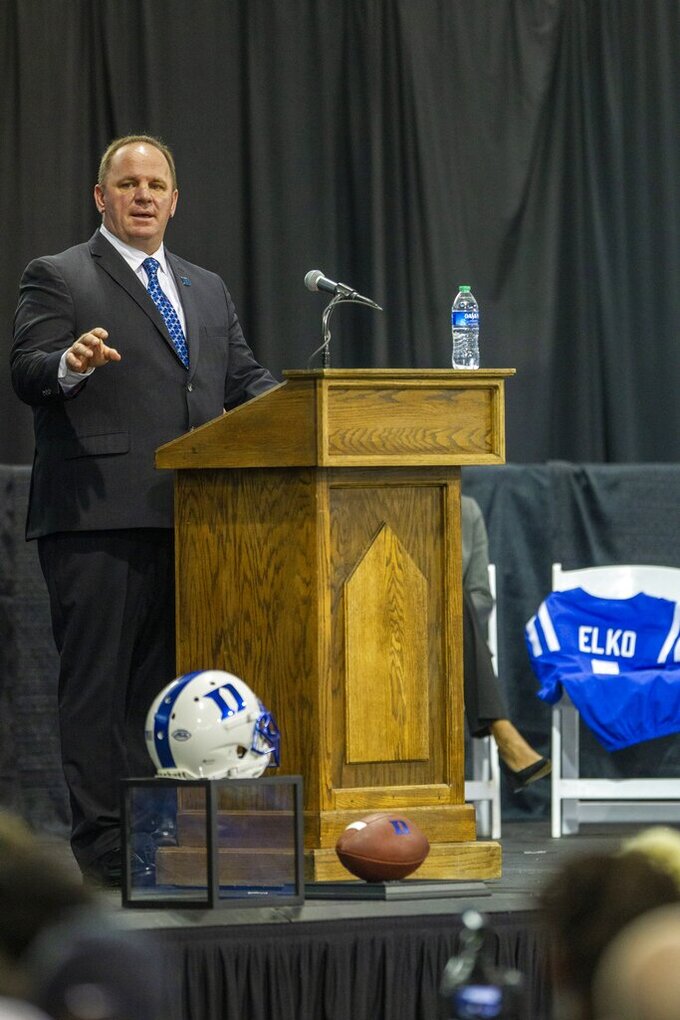 DURHAM, N.C. (AP) — New Duke coach Mike Elko is focused on the recent run of football success that he believes indicates Duke can win again, along with the school committing more financial investments for the program.

Duke announced the hiring Friday night and is counting on the first-time head coach to get the Blue Devils back to the success it had enjoyed for much of predecessor David Cutcliffe’s tenure, when they routinely reached bowl games and even claimed an Atlantic Coast Conference division title in 2013 before an abrupt decline the past two seasons.

Elko, 44, has worked as a defensive coordinator at multiple schools, most recently at Texas A&M but also Notre Dame, Wake Forest and Bowling Green in the past decade.

His news conference came roughly two weeks after the school announced Cutcliffe wouldn’t return for a 15th decision following the first winless ACC record of his tenure. And it came two days before the early national signing day, with Duke owning 17 commitments for this year’s senior class according to 247sports.

“We want to have the ability to be a developmental program and take kids and make them everything that we can become,” Elko said. “But I also think we have a very strong national brand. I think we want to go beat down doors and knock down doors across this country to find elite-level athletes who want elite-level academics. They’re out there and they exist.”

Elko is also working to build a coaching staff but has no timetable on when that will be complete. But part of the hiring process for athletics director Nina King – whose brief tenure has now included two announced coaching changes for high-profile programs – included committed to increasing the salary pool for hiring and retaining assistant coaches. She didn’t reveal specific figures.

She also pointed to upgrades for the Yoh Football Center, which opened in 2002 to hold football offices, locker rooms and training facilities.

“We know that we need to renovate Yoh, it hasn’t been touched since it’s been built,” King said after the news conference. “It’s on the radar, it’s on the wish list, and it always has been frankly. But I was up front with Coach Elko, it’s going to take significant philanthropic support to do some renovations there.

“So we’re going to hit the ground and eat a lot of chicken dinners with donors and get some folks to help us there. But we’re ready. We’re ready to look and see where we can renovate and what we can do.”

Still, Elko is inheriting a program with better infrascruture than when Cutcliffe arrived in December 2007. That includes renovations to Wallace Wade Stadium that added the Blue Devil Tower of suites, meeting space and media areas, as well as the construction of an indoor practice facility – which housed the stage where Elko held his news conference Monday.

He sees those as examples of how things can change at Duke, again.

“I’m not naïve to what Duke football may have been in the past," he said. "But this indoor wasn’t there. There was a track around the football field. We didn’t have that great tower. We didn’t have this great practice complex. So there’s a lot of things about Duke right now that are not the same as Duke 15 years ago.”