Football parity dominating the ACC _ except at Clemson 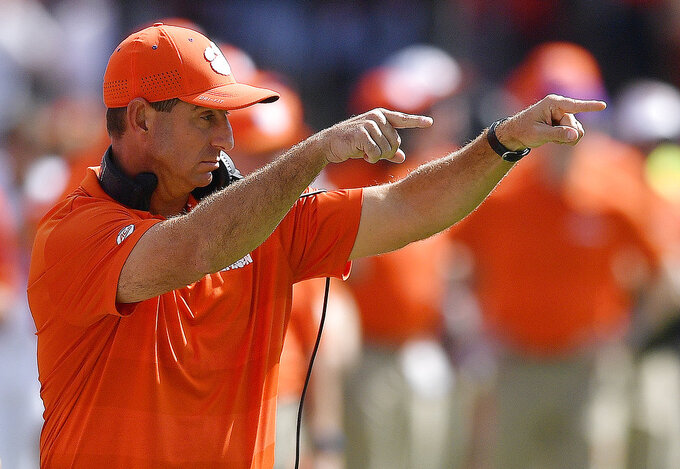 FILE - In this Saturday, Sept. 22, 2018, file photo, Clemson head coach Dabo Swinney gestures during the first half of an NCAA college football game against Georgia Tech in Atlanta. This season is shaping up to be one of even greater parity in the ACC. The Tigers still have to play N.C. State, Florida State, Duke, and Boston College in their quest for another berth in the College Football Playoff. (AP Photo/Mike Stewart, File) 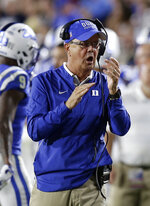 Clemson coach Dabo Swinney breathed a big sigh of relief when his Tigers remained unbeaten — barely — in a come-from-behind victory over Syracuse.

The winning touchdown in a 27-23 triumph just over a week ago was scored with less than a minute to play — in Death Valley, no less, before more than 80,000 rabid fans. And it came against a team that has won just one Atlantic Coast Conference road game in three seasons under Dino Babers.

This season is shaping up to be one of even greater parity in the ACC.

It all seems to set up a race to the conference title game filled with tension, especially with Duke, Boston College, and Syracuse having shown some early season spunk and Clemson (6-0, 3-0) playing with inexperienced quarterbacks.

The Tigers still have to play N.C. State, Florida State, Duke, and Boston College in their quest for another berth in the College Football Playoff.

"The past two years alone we had 21 bowl teams. So, I mean, that's pretty amazing," Swinney said. "That's a lot of teams that are winning ... and so that means to me that anybody can beat anybody on any given day in this league."

Led by senior quarterback Ryan Finley (330.4 yards per game), the Wolfpack is 5-0 for the first time since 2002 — and only the sixth time in nearly a century. N.C. State boosted its winning streak to seven straight after barely holding off Boston College 28-23 at home on Saturday. And the Eagles (4-2, 1-1) were missing star tailback AJ Dillon, the ACC's leading rusher who was out with an ankle injury.

Miami (5-1, 2-0) has won five in a row after losing its season opener to LSU, while Florida State (3-3, 1-3) has struggled under first-year coach Willie Taggart. Still, against the Hurricanes' second-ranked defense, FSU built a 27-7 lead late in the third quarter Saturday on the road, then had a fourth-quarter touchdown nullified by penalty and lost 28-27 .

"This parity in this league, I told our team, 'Welcome to the next seven games you're going to play,'" Duke coach David Cutcliffe said after his Blue Devils dropped their ACC opener to Virginia Tech. "Every ACC game is going to be the same. It's going to require that you play as well as you can possibly play."

Louisville, which hasn't recovered from the departure of Heisman Trophy winner Lamar Jackson, and Wake Forest (3-3, 0-2) have struggled in conference play, but other teams have picked up the slack to help level the playing field.

"I do think it will be wide open. I'm not sure there's a huge difference between anybody, with maybe one exception," Virginia Tech coach Justin Fuente said. "It should be interesting to see how it plays out. Maybe some of the teams that people don't normally think about first are going to have pretty good years."

Some of those teams and why they can be threats:

After the close call against Clemson, the Orange (4-2, 1-2), who have won just four games in each of the last three seasons, were on the cusp of being ranked for the first time since 2001. But on Saturday they blew a late lead at Pittsburgh and lost in overtime .

What makes Syracuse a dangerous team is senior quarterback Eric Dungey, who engineered a stunning upset of second-ranked Clemson a year ago. He's responsible for 17 points per game (seven rushing TDs and 10 passing), which leads the ACC.

"I'm not sure there's another runner-passer combination in college football that can do some of the things that Eric can do with his arms and his legs," Babers said.

The Orange, who are tied for the national lead with Clemson and Miami with 3.33 sacks per game, have BC, No. 5 Notre Dame, and N.C. State ahead.

The Eagles were ranked (23rd) for the first time since 2008 after defeating Wake Forest to open ACC play. Paced by Dillon (6.15 yards per carry) and QB Anthony Brown (20th nationally in yards per completion at 14.12), BC scored 40 or more points in its first three games for the first time in school history. BC also is tied for third nationally with 16 takeaways (10 interceptions, six fumble recoveries) and has 18 sacks. Its loss at Purdue (2-2) isn't looking so bad now.

"We've had a couple of tough losses. Hard to evaluate where we are," BC coach Steve Addazio said. "But I like the football team that we've got right now. I think we're getting better."

Two years ago BC ended a 12-game losing streak in the conference.

The Blue Devils won their first four games and appeared in the AP Top 25 (No. 22) for the first time in nearly three years. Duke's ranking was impressive considering its injuries. Three-year starting quarterback Daniel Jones sustained a collarbone injury in Week 2.

"I think all these teams are so evenly matched and it comes down to making plays on that day," Jones said. "I think you see that with all these teams in a matchup. It's not necessarily a talent thing all the time. It's about who's executing, who's taking advantage of the opportunities. I think that's the thing to think about in the ACC and down the road here."

Dual-threat QB Bryce Perkins has thrown for 11 TDs and scored three times and is responsible for 16.8 points per game, tied for 22nd nationally. Senior RB Jordan Ellis has rushed for 478 yards and is averaging 5.69 yards per carry, and Olamide Zaccheaus has 33 catches for 501 yards and six scores. The Cavaliers (3-2, 1-1) can state their case for being improved on Saturday night at home against Miami.

The Panthers (3-3, 2-1) have an impressive running tandem of Qadree Ollison a nd Darrin Hall, who combined for 299 yards and three TDs against Syracuse. Pitt, which stunned second-ranked Miami last season, plays at Notre Dame this week.

"Pitt's a dangerous team," Dungey said. "Their record doesn't reflect what a team they are."

With QB TaQuon Marshall operating the option attack, the Yellow Jackets (3-3, 1-2) have gone over the 400-yard mark in rushing three times and lead the nation at 373 yards per game. They, like Virginia, still have games against the Hurricanes and Virginia Tech.

By Jim Vertuno And Pat Eaton-Robb 27 minutes ago
By John Coon 11 hrs ago
By Pete Iacobelli 13 hrs ago
By Dave Campbell 17 hrs ago
By Anne M. Peterson 19 hrs ago