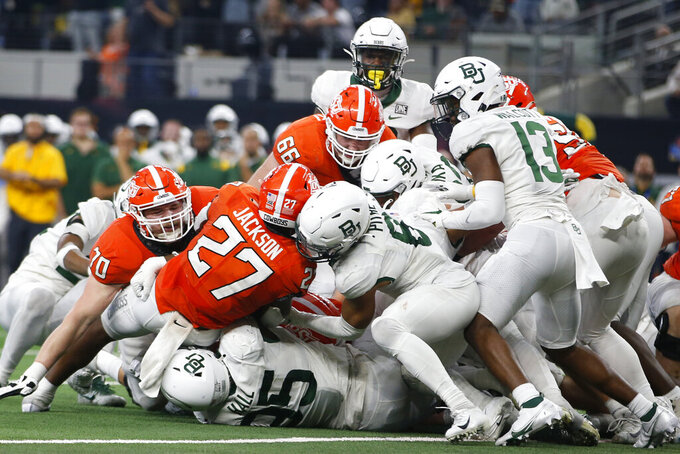 Oklahoma State running back Dezmon Jackson (27) is stopped short of the goal line by Baylor defensive lineman Gabe Hall (95) and safety Jalen Pitre (8) in the second half of an NCAA college football game for the Big 12 Conference championship in Arlington, Texas, Saturday, Dec. 4, 2021. (AP Photo/Tim Heitman)

The Latest from the College Football Playoff announcement and bowl selection day (all times Eastern):

No. 5 Notre Dame will face No. 9 Oklahoma State in the Fiesta Bowl in a matchup of two teams that just missed the College Football Playoff.

The Cowboys (11-2) came up inches short of a possible CFP berth when Dezmon Jackson was stopped just short of the end zone pylon in the final seconds of a 21-16 loss to Baylor in the Big 12 championship game.

Utah will face Ohio State in the 108th edition of the Rose Bowl.

The Utes will be making their first appearance in the Granddaddy of Them All on Jan. 1 after their 38-10 victory over Oregon in the Pac-12 championship game. Utah (10-3) started the season dropping two of its first three games before winning nine of their last 10 games. Three of those victories came against Top 25 teams.

This will also be Utah’s third appearance in a New Year’s Six bowl. They won the 2004 Fiesta Bowl over Pittsburgh and 2009 Sugar Bowl over Alabama.

The Buckeyes (10-2) were in position most of the season to make their third straight trip to the College Football Playoff, but got knocked out of contention with a 42-27 loss at Michigan. This will be Ohio State’s 16th trip to Pasadena and its second in the past four years. Their last trip was during the 2018 season when they defeated Washington in what was Urban Meyer’s final game on the Buckeyes’ sideline.

Pittsburgh’s reward for its first ACC championship is a date with Michigan State in the Peach Bowl.

Pitt (11-2) beat Wake Forest 45-21 in the ACC championship game on Saturday night. Kenny Pickett threw for two touchdowns but his highlight was a 58-yard scoring run that included a fake slide.

Michigan State (10-2) closed its regular season by beating Penn State 30-27 as Payton Thorne threw two touchdown passes and ran for another. The Spartans feature a strong running game. Kenneth Walker III ran for 138 yards in the win over Ohio State.

No. 2 seed Michigan and No. 3 Georgia will meet in a College Football Playoff semifinal on New Year’s Eve at the Orange Bowl in Miami Gardens, Florida.

This will be the third time the Orange Bowl has hosted a national semifinal. Hard Rock Stadium was site for Alabama’s win over Ohio State in the 2021 national championship game.

Michigan is coming off a 42-3 win over Iowa in the Big Ten championship game. The Wolverines won their first conference title since 2004. Georgia lost 41-24 to Alabama in the Southeastern Conference title game.

Cincinnati is the first team from outside a Power Five Conference to make the College Football Playoff. The Bearcats will play top-seeded Alabama in a semifinal game at the Cotton Bowl on New Year’s Eve.

The American Athletic Conference champion Bearcats (13-0), No. 4 in the final CFP rankings released Sunday, are the only undefeated team left this season.

Alabama (12-1) is in the playoff for a record seventh time in the eight years of the four-team format, and will play its 12th CFP game. The Crimson Tide won the SEC championship game over Georgia, which had been the only other team without a loss.

Cincinnati is playing in its second consecutive New Year’s Six game. Its only loss over the past two seasons was in the Peach Bowl last New Year’s Day, when Georgia kicked a 53-yard field goal with three seconds left for a 24-21 win.

The Bearcats have only two wins over Top 25 teams. That included 24-13 at Notre Dame on Oct. 2, the only loss this season for the Fighting Irish, who were fifth in the final playoff rankings.

Alabama will play its third CFP semifinal game at the home of the NFL Dallas Cowboys, winning the first two in national title seasons. The Tide beat Michigan State 38-0 in the Cotton Bowl six years ago, and last Jan. 1 beat Notre Dame 31-14 in a Rose Bowl game relocated from California because of the pandemic.