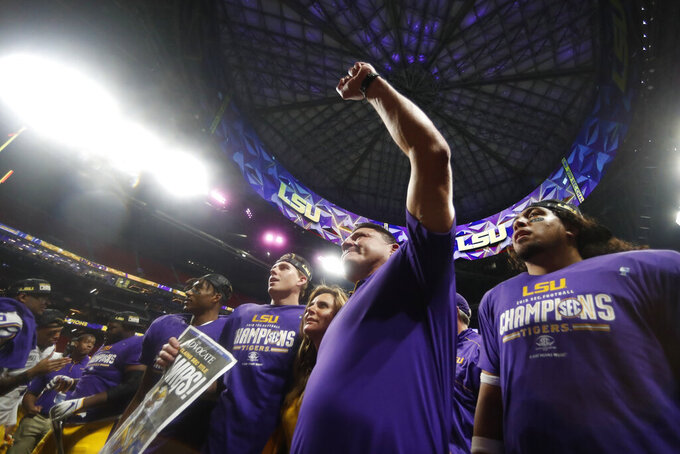 Ed Orgeron of LSU is The Associated Press Coach of the Year after leading the top-ranked Tigers to a Southeastern Conference championship and their first College Football Playoff appearance.

Orgeron received 33 of 56 first-place votes from Top 25 poll voters and a total of 130 points for the award presented by Regions Bank and announced Tuesday.

Orgeron is the third different LSU coach to win the award since it was established in 1998, joining Nick Saban in 2003 and Les Miles in 2011. Saban and Miles both led their teams to the BCS championship game, with Saban winning and Miles losing.

Orgeron and the Tigers will face No. 4 Oklahoma in the College Football Playoff semifinals on Dec. 28 at the Peach Bowl in Atlanta.

This is Orgeron's third full season as LSU coach and the Tigers' record has improved each year. He was elevated to interim coach during the 2016 season after Miles was fired and eventually landed his dream job.

The Louisiana native is 38-9 at LSU with a 23-7 record in the SEC. The 58-year-old Orgeron was a longtime assistant coach, part of national championship staffs with Miami in the late 1980s and early '90s, and with Southern California in the early 2000s. Along the way, he gained a reputation as one of the best recruiters and defensive line coaches in the nation.

His first stint as a head coach was in the SEC at Mississippi. That lasted only three seasons and 10 victories. He was interim head coach at USC in 2013, going 6-2 but it wasn't enough to keep the job.

Orgeron landed at LSU as an assistant to Miles in 2015. He faced some skepticism when he was first given the job by then-athletic director Joe Alleva, but over three years he has proved to be a perfect fit. A week after his team landed the top seed in the playoff, he spent the weekend watching his quarterback, Joe Burrow, win the Heisman Trophy.