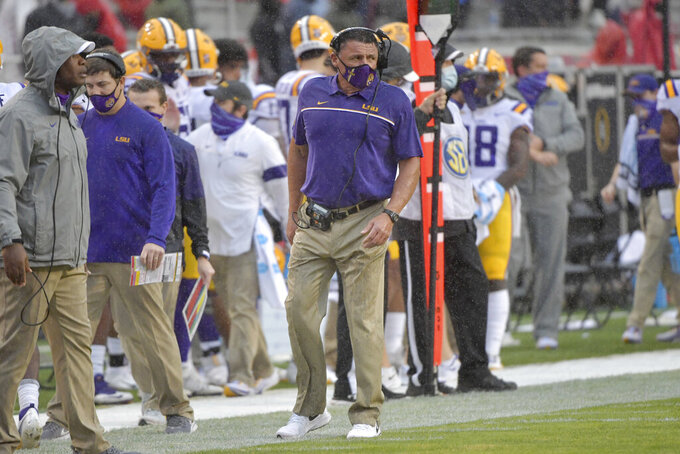 BATON ROUGE, La. (AP) — LSU coach Ed Orgeron forged a career path that led him to the top of his profession by persevering through personal and professional hardships.

So it’s little wonder that he continues to project optimism while the Tigers have labored in mediocrity just one season after a historically dominant national title campaign.

After going 15-0 a season ago, with most victories by double-digit margins, LSU is 3-3, unranked and listed as a two-touchdown underdog when the Tigers visit No. 5 Texas A&M on Saturday.

“Sometimes you learn the most from your losses,” Orgeron said in an interview with The Associated Press about his recently published memoir, “Flip The Script: Lessons Learned on the Road to a Championship.”

“Nobody wants to lose, but if you can grow from that, it’s going to pay off in the end," Orgeron said. “I think that’s what we’re going through right now. This is a brand new team. Hardly any of these guys played on the championship team and this is the first (season) a lot of them have played. ... I know we’re building a championship team, but championship teams take a while to build. I’m in no panic or nothing like that.”

Off the field his program is part of an LSU investigation of the university’s handling of reported sexual and domestic assault cases. Interim LSU president Thomas C. Galligan Jr. and Athletic Director Scott Woodward announced the start of the probe in a published letter to the LSU community. The investigation encompasses all departments at LSU. But several high-profile allegations in recent years have involved members of LSU’s football team.

Orgeron has faced many personal challenges in his career.

He opens up in the book about bouts with alcoholism that stunted his coaching career when he was an assistant at Miami while the Hurricanes won a national championship. He wound up back in his native Larose, Louisiana, unemployed and living with his parents before resuming his career as a volunteer assistant at Nicholls State.

“I just felt that, you know, I have no regrets of the past,” said Orgeron, who dedicated the book to his mother and late father, whom he credits for instilling in him his work ethic and resilience.

“Obviously, I did some things that wasn’t right. But I learned my lesson from all that,” Orgeron said. “Hopefully by me sharing my past and the stuff that’s happened to me, it could help somebody down the road -- especially with my addiction. That’s something that people battle all the time, battle on a daily basis. It’s been 20 years that I’ve been sober. And look what’s happened to me in my life.”

Orgeron details numerous other low moments, such as the mockery, derision and humiliation he faced on the recruiting trail after the coach that had hired him at USC, Paul Hackett, had been fired late in the 2000 season. Orgeron kept pursuing high-profile prospects for Southern Cal, even though a new coach hadn’t been hired and none of Hackett’s assistants had any promise of being retained.

Coaches from rival programs belittled his efforts, but Orgeron got the last laugh when Pete Carroll was hired and chose to make Orgeron a central figure on a new staff that presided over the Trojans’ return to prominence.

“There was a lot of times where a normal person would have just said, ‘Hey, I’ve had enough,’” Orgeron said. “But I was not going to quit.”

Orgeron wasn’t always so resolute. He had to learn the hard way, starting with his decision to drop out of LSU his freshman year. That led to him digging ditches near home and having to hear motorists who recognized him call him a quitter, among other unflattering names.

His first major college head coaching stint at Mississippi was a bust in which he recalls micromanaging to a fault, being unreasonably tough on his players and becoming unduly concerned with critical media coverage.

And he details his profound disappointment at being passed over for the head coaching job at USC after a successful run as interim coach in 2013, following Lane Kiffin's firing.

Orgeron returned home to Louisiana, initially depressed, only to realize that time away from coaching helped him form lasting memories of being a more present father to his then teen-age sons.

By 2015, Orgeron was back in coaching as a defensive assistant at LSU, which promoted him after the firing of Les Miles in 2016.

He knows he has a lot to give thanks for on this holiday.

“Everybody has a dream,” Orgeron said. “Chase your dream, man, and don’t let anybody get in your way. Don’t let anybody tell you you can’t do it or just because life happens and you get some bumps in the road. Keep fighting, man. Look at me. My dream was to be the head coach of the LSU Tigers and I went through a lot of stuff.”