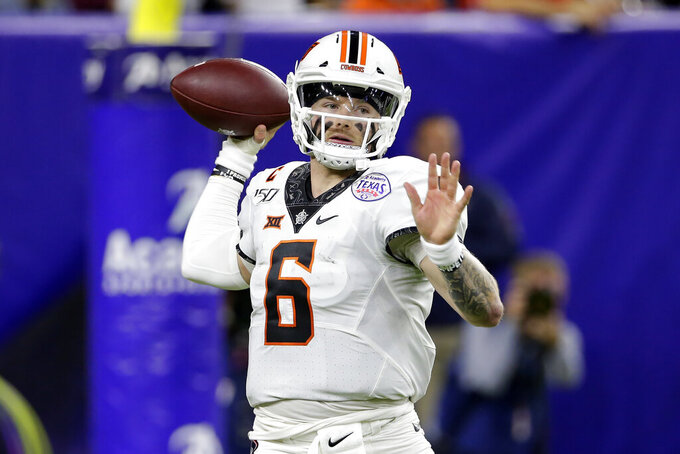 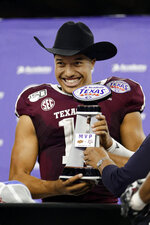 HOUSTON (AP) — Texas A&M coach Jimbo Fisher talks to his team every day about the importance of grit.

On Friday night the Aggies showed the quality their coach talks about so much when they shook off a tough start to rally for 24-21 victory over Oklahoma State in the Texas Bowl.

“When they jumped out early we didn't say, ‘Here we go again,'” Fisher said. “They said, `We're going to fix this. We're going to handle it. We're going to keep our poise.' Then they got in the groove and got their confidence back and started playing well.”

Kellen Mond ran for a career-high 117 yards and threw a touchdown pass as Texas A&M scored 24 straight points to overcome the early deficit.

“After a really poor start ... we were able to come out in the second half as an offense and make a lot of big plays,” Mond said,

“He did a great job of stretching the option which allowed everybody to get their blocks just sorted out,” Fisher said. “And then he got inside and ran away from everybody and it was a big-time play and a big-time moment.”

“They wore our front down as the game went on,” Oklahoma State coach Mike Gundy said. “We had some concerns coming into the game that they're pretty physical up front on both sides of the ball and I think they just wore us out a little bit.”

Mond, who threw for 95 yards, fumbled twice early and the Aggies trailed 14-0 after the first quarter and were down by seven at halftime.

He had just 35 yards passing in the first half, but got going on Texas A&M's first possession of the second half. He had a 28-yard completion on a drive that ended with a 10-yard touchdown pass to Jhamon Ausbon which tied it at 14-14 early in the third.

Mond fumbled on A&M's first drive and it was recovered by Oklahoma State. But the Cowboys came away empty when Matt Ammendola missed a 53-yard field goal.

The Cowboys took a 7-0 lead in the first quarter when they capped a 97-yard drive with a 42-yard touchdown reception by Johnson. Hubbard had a 37-yard run to power that drive.

Dru Brown connected with Johnson on a 57-yard pass later in the first quarter to give Oklahoma State a first down at the 9. The Cowboys pushed the lead to 14-0 when Brown dashed into the end zone on the next play.

Mond fumbled again early in the second quarter, but once again the Cowboys couldn't turn the mistake into points and they had to punt it away.

The Aggies cut the lead to 14-7 on the next drive on a 1-yard touchdown run by Isaiah Spiller.

Oklahoma State: The Cowboys started out strong but were unable to build on their early lead and allowed Mond to control the game after halftime.

Texas A&M: The Aggies did a good job of shaking off their bad start and get the win to end the season on a positive note after losing their last two regular-season games.

The victory was the 100th of Fisher's career. He is 100-32 in a 10-year coaching career with eight seasons at Florida State and two years at Texas A&M. Fisher, who won a national championship with the Seminoles in 2013, is 17-9 with the Aggies.

Sanders tweeted congratulations to Hubbard after he reached the 2,000-yards mark and said: “I know the effort it takes to get there.”

Hubbard was asked what eclipsing 2,000 yards meant to him.

“I made a lot of bonds with these guys,” he said. “Relationships last a lifetime. 2,000 yards is just a number, but those friendships and bonds I’ve made will last forever.”

Oklahoma State: The Cowboys will wait to see if Hubbard will return for his junior season or enter the NFL draft. He has said he'll make his decision sometime after the bowl game.

“There’s a lot that factors into it,” Hubbard said. “I’ll have to talk with my family and friends and get all the resources. In two weeks, you guys will find out.”

Texas A&M: The Aggies have yet to become true contenders in the rugged SEC West, but they could be poised for a strong 2020 campaign in Mond's last season with the return of an experienced offensive line and talent at running back.