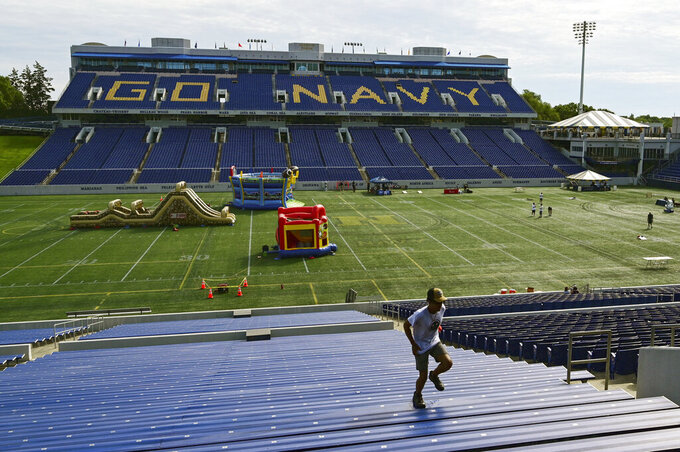 ANNAPOLIS, Md. (AP) — Navy coach Ken Niumatalolo has won his share of games against Army, and last year's victory may have been a particularly crucial one for his program.

The Midshipmen were finishing up a losing season — their second in a row — when they won the most important game on their schedule. Now Navy hopes that 17-13 triumph over Army can be a turning point for a team that seemed to need one.

“You kind of fight through the fire last year, but once you come through it, I feel really, really good about it," Niumatalolo said. "And I think it was evidenced by the last game.”

Navy has endured back-to-back sub-.500 seasons for the first time since going 11-45 from 1998-2002. The situation hasn't become that dire, but 3-7 followed by 4-8 the past two years was uncharacteristic of Niumatalolo's program.

The start of last season was particularly concerning — a 49-7 loss to Marshall followed by a 23-3 defeat at home against Air Force. That put longtime offensive coordinator Ivin Jasper's job in limbo, but he stayed on as quarterbacks coach.

Navy improved after that, with competitive losses to Houston and SMU sandwiched around a win over Central Florida. The Midshipmen also lost by just seven to playoff-bound Cincinnati.

The difficult schedule seemed to pay dividends at the end when Navy won its final two games — including its 16th victory in the past 20 years against Army.

Although that was a massive victory within the Navy program, the Midshipmen still have a lot to prove in terms of their ability to handle the rest of their schedule. They were picked 10th in the American Athletic Conference in this year's preseason media poll.

Navy isn’t the type of program that comes to mind when issues surrounding name, image and likeness or the transfer portal are discussed. Still, Niumatalolo says it's important to keep an eye on that.

“Some of it may not affect us, but eventually it does affect us,” he said. “We don't go to the portal like everybody else, but people still leave our school.”

Realignment also has the potential to affect Navy in various ways.

“I don't know how it would trickle down to us, so you kind of keep your eye on that,” Niumatalolo said. “But most important, just try to get our team ready.”

Navy is now without linebacker Diego Fagot, who signed with the Baltimore Ravens as an undrafted free agent. As much as the Midshipmen can catch teams off guard with their option offense, keeping up defensively is a challenge. Navy held its own against impressive offensive teams like SMU and Cincinnati a season ago.

Tai Lavatai was the starting quarterback for most of last season. It was his first year of varsity action, and the experience he gained should only help him in 2022.

“I feel a million times more confident. I feel like I could tell you exactly what every single person does on any possible play against any defense," Lavatai said. “It's a big relief.”

Navy opens the season against Delaware of the FCS on Sept. 3. Other highlights include a visit to Air Force on Oct. 1 and a matchup with Notre Dame in Baltimore on Nov. 12. The Army game is Dec. 10 in Philadelphia.