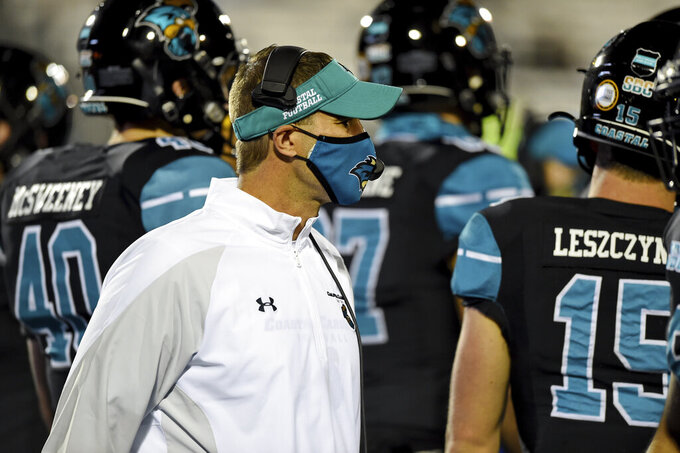 The Sun Belt Conference's landmark season concludes on a high note — with perhaps an even bigger milestone ahead no matter whether No. 9 Coastal Carolina or No. 17 Louisiana-Lafayette wins the league championship.

Both schools, which meet in the Sun Belt title game Saturday, are in line for a New Year's Six bowl spot with a win, something few could've envisioned back in August.

And he has much to be thankful for this holiday season.

It's the first time the league has had two ranked teams vie for the title. The Chants (11-0, 8-0 Sun Belt; No. 12 CFP) are the conference's first top 10 team and while the contenders have two of the hottest young coaches in the country: Coastal Carolina's Jamey Chadwell and the Ragin' Cajuns' Billy Napier.

“To have our teams to be right there to seize this opportunity is great,” the conference commissioner said.

It's been a season of hard work and close calls for both teams to reach this point.

Coastal's year caught fire in October when it went to then-No. 21 Louisiana-Lafayette (9-1, 7-1; No. 19 CFP) and won 30-27 on a last minute field goal for its first-ever victory over a ranked opponent.

The Chanticleers added a second ranked victory — an additional program first — two weeks ago with a dramatic, 22-17 win over then-No. 8 BYU by stopping Cougars' receiver Dax Milne a yard from the end zone on the final play.

Last Saturday, Coastal Carolina quarterback Grayson McCall connected on a 23-yard TD pass with Javion Heiligh with 45 seconds left for a 42-38 win over Troy to keep the perfect season alive.

Next up, finishing the undefeated season against Louisiana Lafayette.

“We've not made the moment too big,” Coastal coach Jamey Chadwell said. “We know it's an important game.”

Napier said his team, which defeated No. 8 Iowa State in September, has been focused on improving since their loss to Coastal two months ago and preparing for a high stakes rematch.

“We created a playoff mindset,” Napier said. “This is the next challenge.”

The Sun Belt winner will need some help from No. 20 Tulsa, which is playing undefeated and sixth-ranked Cincinnati, the leader among Group of Five teams, for the American Athletic Conference championship on Saturday.

Asked if he's pulling for Tulsa, Gill laughed a bit, saying “I think that'd be a fair opinion."

Some other things to watch in the Sun Belt Conference championship game:

Both Chadwell and Napier have come up in Power Five team coaching searches this season. The two were interviewed regarding South Carolina's opening that went to Oklahoma assistant Shane Beamer. Coastal took steps to keep Chadwell, extending his contract through 2027.

Louisiana-Lafayette had lost the last two Sun Belt title games to Appalachian State. The Ragin' Cajuns finally broke through against the Mountaineers this year, 24-21, in the regular season and hope to win their first conference crown since 2005. Louisiana-Lafayette won the league in 2013, but had the title vacated due to NCAA violations.

Coastal Carolina and Louisiana Lafayette led the way in the Sun Belt's success against the Big 12 this season, the league going 3-0 vs. the Power Five conference. The Chants defeated Kansas 38-23 on Sept. 12 to start the season. The same day, the Ragin' Cajuns defeated then-No. 23 Iowa State while Arkansas State topped Kansas State 35-31.

Coastal Carolina linebacker Silas Kelly thinks about his team's dream season whenever he looks in the mirror. After beating Louisiana-Lafayette in October, Kelly told his teammates he'd shave once the Chants lost. They've won the past seven games since and Kelly says he's “got the patchiest beard.”