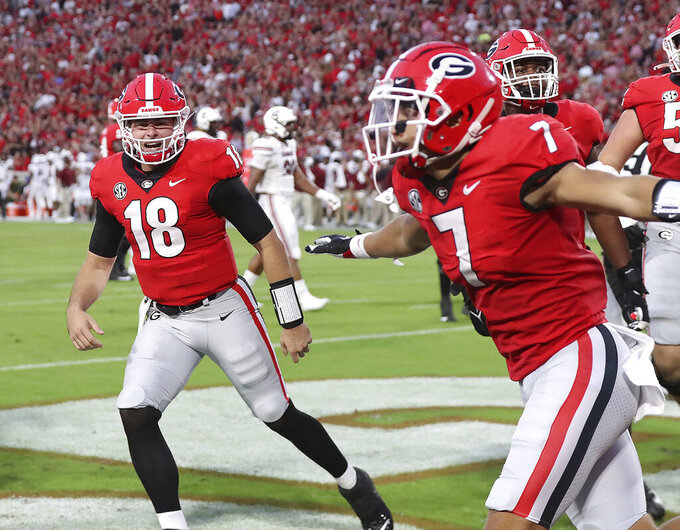 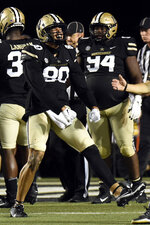 Line: Georgia by 34 1/2, according to FanDuel Sportsbook.

Georgia can continue its undefeated start and further fine-tune a defense that has allowed one touchdown through three games. Vanderbilt is trying to snap a 13-game skid inside the Southeastern Conference after going 0-9 last season with an all-league schedule. Last year's game was canceled when Vanderbilt didn't have enough players because of the coronavirus pandemic. This will be Vanderbilt coach Clark Lea’s SEC debut. Lea has some familiarity with Georgia from 2019 when he was the defensive coordinator at Notre Dame.

The Bulldogs bring the nation's third-ranked defense in the Southeastern Conference to Nashville and are holding opponents to 75 yards rushing a game. Vanderbilt is coming off its best rushing performance in a couple seasons. The Commodores ran for 247 yards last week, though top rusher Re’Mahn Davis will miss the rest of the season with an injured toe.

Georgia: QB JT Daniels. The junior missed the Bulldogs' second game this season, but he was 23 of 31 for 303 yards and three touchdowns in Georgia's win over South Carolina. He is 6-0 as Georgia's starter.

Vanderbilt: RB Rocko Griffin. The sophomore takes over as the starting running back with Davis out for the season. Griffin is coming off a career-high 107 yards rushing on 19 carries.

Georgia has won three straight in this series. Vanderbilt's last win was in 2016 in Athens. ... This will be the first time Georgia has played back-to-back games in Nashville since 1932 and 1952. ... Georgia is the only team in the nation with a 3-0 record versus teams with a winning record. ... Georgia is tied for fourth nationally with 13 sacks. ... Vanderbilt has lost 13 straight SEC games. ... Vanderbilt punter Harrison Smith is third in the SEC averaging 44.9 yards a punt. He has a season-long of 66 yards with eight of at least 50 yards.