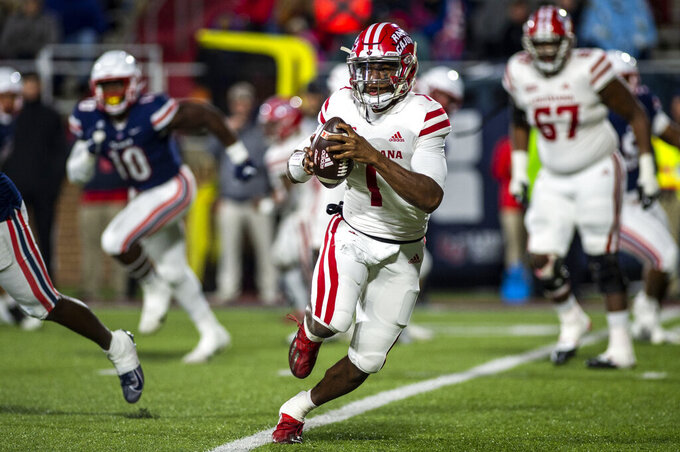 LYNCHBURG, Va. (AP) — Levi Lewis threw for 166 yards and three touchdowns, Louisiana-Lafayette had six takeaways and seven sacks and the No. 22 Ragin’ Cajuns capped the nonconference portion of their schedule with a 42-14 victory over Liberty on Saturday night.

Louisiana-Lafayette (10-1) won its 10th straight game since a season-opening loss at Texas. Liberty dropped to 7-3.

Lewis completed one of his first eight passes, then connected on 13 of 17 attempts with touchdown strikes of 4, 15 and 2 yards. He has thrown 10 touchdown passes to one interception in his last four games.

“Well-executed plan and certainly knew it was going to be a challenge and they stepped up tonight,” coach Billy Napier said.

Louisiana-Lafayette contained Liberty quarterback Malik Willis and prevented him from getting into a rhythm. Willis completed 14 of 34 passes for 162 yards, two touchdowns and two interceptions.

Willis has thrown 11 interceptions this season after throwing only six in the 2020 season.

Chauncey Manac had four of the Ragin’ Cajuns’ seven sacks. All four of his sacks came in a dominating first half that saw Louisiana-Lafayette build a 21-7 lead.

“We stayed in our lanes and when given an opportunity, we finished on the quarterback and got him on the ground,” Napier said.

Willis connected with Kevin Shaa on a 30-yard touchdown pass to open the second half. It cut the Flames’ deficit to 21-14.

That extended the Ragin’ Cajuns’ lead back to two touchdowns, and they scored the final 21 points.

“We did answer,” Napier said. “I thought that was one of the biggest turn of events in the game there was that answer with some runs and with a great throw-and-catch.”

The Flames (7-4) turned the ball over three times after Johnson’s crucial score.

“It’s deflating. Just deflating. It seemed like the game started with that and just like it wasn’t important to us tonight,” Liberty coach Hugh Freeze said. “I’ve got to find a way to make sure that our kids are better prepared to play. … It was something off tonight I felt like for sure. Now, give credit to Louisiana and Billy and his guys. They did a good job. We certainly were not our best tonight. Turnovers make it extremely hard to beat a good team.”

Aidan Alves’ second punt netted 28 yards to give the Ragin’ Cajuns a short field, and they scored 10 plays later to cap a 41-yard drive on Lewis’ 4-yard touchdown pass to John Stephens Jr. that made it 7-0.

The Flames’ second punter, Max Morgan, didn’t field a snap cleanly and whiff on his running punt attempt. The loose ball was scooped up by Dalen Cambre and returned 26 yards for a touchdown with 9:06 left in the first half.

“The guy drops the punt, we’re in position, we scoop and score,” Napier said. “We actually repped that in our situational walk-through the day before.”

Louisiana-Lafayette will remain in the poll another week by posting an impressive road victory. The Ragin’ Cajuns extended their program-record winning streak to 10 games and improved to 15-0 when scoring more than 40 points under Napier.

Louisiana-Lafayette: The Ragin’ Cajuns never trailed in this game and handed Liberty its first home loss since Aug. 31, 2019.

Liberty: The Flames fell to 1-3 in games in which they committed multiple turnovers and allowed multiple sacks. Their lone triumph came Oct. 9 in a 41-13 win over Middle Tennessee.

Louisiana-Lafayette: The Ragin’ Cajuns return home for two games. They host Louisiana-Monroe in the regular-season finale and then welcome the East Division champion for the Sun Belt Conference championship game Dec. 4.