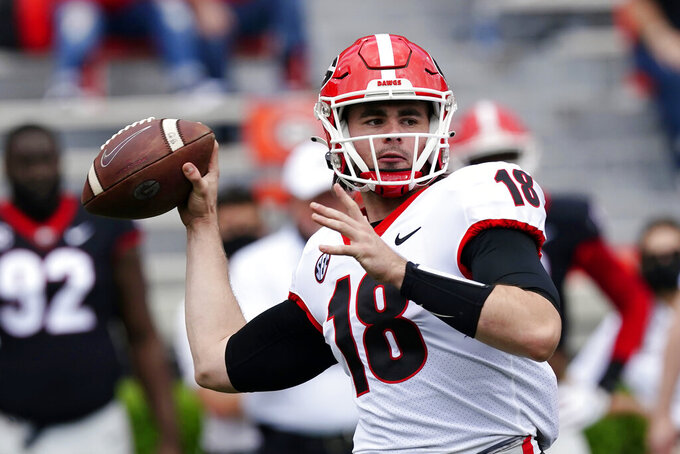 The last three Heisman Trophy winners include the first receiver to win the award in nearly three decades, a quarterback who was the 52nd-rated passer in the country the season before and a first-year starting QB.

The days of the Heisman winner being a well-established star and/or preseason favorite are long gone.

Heisman voters embrace the breakout player more than ever before, and in 2021 there is a good chance the winner again will be someone who enters the season without much of track record.

The only player to finish in the top 10 of last season's Heisman voting to return to college football in ‘21 is Iowa State’s Breece Hall. Considering recent Heisman trends, the seventh-ranked Cyclones' running back isn't even the favorite on his team. That would be quarterback Brock Purdy.

No. 1 Alabama, No. 3 Clemson and No. 4 Ohio State all have new starting quarterbacks, with experience ranging from a couple of impressive starts (D.J Uiagalelei of Clemson) to some mop-up work (Bryce Young of Alabama) to not one single college pass (C.J. Stroud of Ohio State).

Even with that, some Heisman predictions have those three among the top seven favorites, led by Oklahoma's returning starter, Spencer Rattler. Makes sense. The last three starting quarterbacks for coach Lincoln Riley's Sooners have been Heisman finalists and two — Baker Mayfield and Kyler Murray — have won it.

And the winner is ... Uiagalelei. Trevor Lawrence's predecessor becomes the first Clemson player to win the Heisman.

And the winner is ... Thibodeaux. The sack masters tend to win this award, The Ducks' junior is primed to follow recent winners Chase Young of Ohio State, Josh Allen of Kentucky and Bradley Chubb of North Carolina State.

And the winner is ... Neal. Alabama has dominated this award during the Nick Saban era with five winners, including three since 2016. Neal makes it two Crimson Tide offensive tackles in a row after Alex Leatherwood last season.

And the winner is ... Robinson. New Longhorns coach Steve Sarkisian will build the offense around the talented tailback, providing him plenty of opportunities in the running and passing game.

And the winner is ... London. The Trojans will throw it a lot and London's tackle-breaking yards after the catch will make him USC's first Biletnikoff winner since Marqise Lee in 2012.

And the winner is ... Stingley. Last season's dysfunctional LSU defense overshadowed another solid season by Stingley. Tigers' opponents can only avoid him so much with talented sophomore Eli Ricks lining up on the other side.