QB Bohanon uncertain for No. 9 Baylor for Big 12 title game 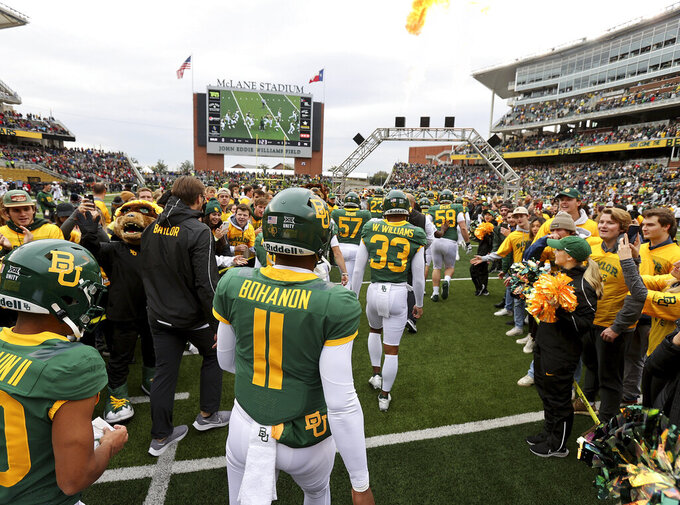 Baylor quarterback Gerry Bohanon's status for the Big 12 championship game was still uncertain Monday after missing the past 1 1/2 games for the ninth-ranked Bears because of a right hamstring injury.

Coach Dave Aranda described Bohanon as “awfully eager” and said that the quarterback would be at practice for the Bears, who play No. 5 Oklahoma State in the title game on Saturday.

“He’s going to go through all that, so we'll see kind of where he’s at," Aranda said. “Gerry is the leader for us and is a stalwart really. And so I think he’s the face of what we’re doing over here, and so we’re excited to have him back and kind of see where it goes.”

Bohanon, the fourth-year junior and first-year starter, missed the regular-season finale Saturday against Texas Tech after injuring his right hamstring late in the first half at Kansas State the previous week.

Redshirt freshman Blake Shapen finished the 20-10 win over the Wildcats and started against the Red Raiders. He threw for 254 yards and two touchdowns in his first start for the Bears (10-2) in a 27-24 win.

“I’m impressed by Blake. I’m not surprised,” said Trestan Ebner, who caught a pass from Shapen in stride for a 61-yard touchdown on the opening drive. “Blake has a certain swagger to him so I know he can go out there and make plays.”

Shapen had to come out of game after he took a crushing hit on a 4-yard run and was checked by trainers with about 4 minutes left against the Red Raiders. Instead of Bohanon, who was in uniform and did some light throwing before the game, true freshman Kyron Drones entered for his first college snap on fourth-and-1. He handed off the Abram Smith, who got the first down before Shapen immediately returned.

“We'll kind of how this week goes with Gerry and his ability to be safe and move around and use his legs, and not necessarily use his legs for productive reasons, but use his legs to just stay clean and not take unneeded hits," Aranda said.

Bohanan has thrown for 2,192 yards with 17 touchdowns and eight interceptions this season. He also has 303 yards and nine TDs rushing.

Baylor is playing in its second Big 12 championship game in three seasons. In the 2019 title against Oklahoma, Bohanon played for injured Charlie Brewer and was 4-of-15 passing for 56 yards with a touchdown in the 30-23 overtime loss. He had 15 yards rushing.

Aranda said the Bears have confidence in Shapen if he is needed to start or play again.

“I thought that he had real maturity and presence in the pocket, and I think he made some really tight throws and some big-time throws," Aranda said.

Oklahoma State coach Mike Gundy doesn't expect there to be much change in how Baylor plays offensively, no matter which quarterback is in the game.

“I think their schemes are similar,” Gundy said. “Obviously, we’ll have to have a good look at the new guy and kind of get a feel for him. But I think that the style of play they use with their coordinator and their offensive staff is very similar.”