Some of Clemson defensive linemen workout for NFL executives 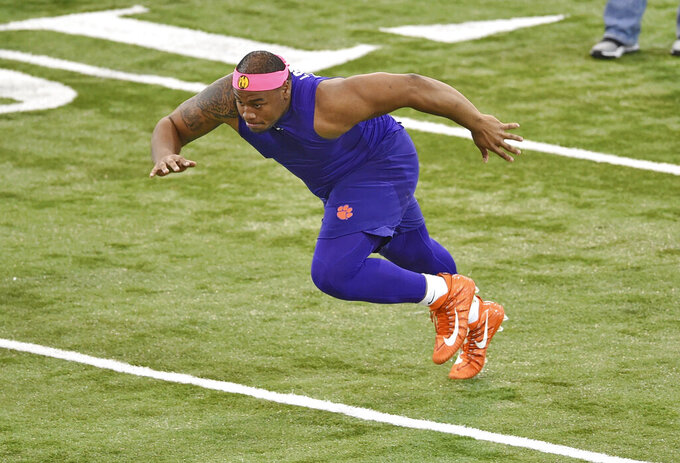 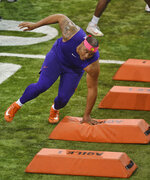 CLEMSON, S.C. (AP) — Half of Clemson's talented defensive front four participated in the Tigers pro day Thursday before evaluators from all 32 NFL teams.

While defensive ends Clelin Ferrell and Austin Bryant did not take part in drills due to injuries, tackles Christian Wilkins and Dexter Lawrence showcased the abilities that have them on track to be first-round NFL draft picks next month. The linemen, nicknamed the Power Rangers after the popular children's heroes, met NFL officials, including three head AFC coaches: Pittsburgh's Mike Tomlin, Tennessee's Mike Vrabel and Cincinnati's Zac Taylor.

The four linemen, all part of Clemson's two national titles the past three seasons, wore different color headbands during the session that synched up their favorite Mighty Morphin heroes.

"That was the last time back in the action. Last time we get to morph together," said Wilkins, the 6-foot-3, 315-pound All-American. "We had to go out with a bang."

The final bang should come next month when at least three and possibly all four could get selected in the opening round of the NFL draft.

"I don't know if that's ever happened," said Ferrell, the All-American who had 11.5 sacks during Clemson's national title run this season.

The four were part of a larger group of draft-eligible players who worked out in front of NFL personnel at Clemson's indoor practice facility. Others who expect to hear their names called early in the draft April 25-27 included linebacker Tre Lamar and cornerback Trayvon Mullen, the defensive MVP of Clemson's 44-16 victory over Alabama in the national title game in January.

The featured players for NFL personnel, though, all played up front for Clemson's defense.

A turf toe injury Ferrell played with most of the season and that he re-aggravated this week kept him from doing much more than talking to pro scouts. Bryant, the 6-4, 271-pound senior, is also recovering from a pectoral muscle operation in January and said he planned a "mock pro day" when he got the all-clear from doctors.

Wilkins and Lawrence stood on their 40-yard dash times from the NFL combine earlier this month. They participated in cone drills and defensive workouts before speaking with several teams individually.

Bryant, Ferrell and Wilkins all considered leaving for the NFL after the 2017 season when Clemson lost in the national semifinals to Alabama. The trio, though, chose to return to give chase to one more title and helped the Tigers become major college football's first 15-0 champions.

Wilkins said losing to Notre Dame in the Cotton Bowl or Alabama a week later might've have left him with mixed feelings heading to the NFL. "It's definitely nice, definitely a plus that we got that national championship," he said.

Ferrell is considered a top-10 pick as an edge rusher and shows up first of the four in several NFL mock drafts. He was not worried that his pro day absence would hurt that projection. After all, Ferrell said he played with the toe problem much of the year and still finished with 20 tackles for loss.

Ferrell was most upset about missing a last chance to work alongside his teammates.

"Not being able to go out there with my guys on the field together for the last time was something that really, really hurt," he said.

Lawrence is the 6-4, 342-pound tackle who missed Clemson's College Football Playoff games when he was suspended after testing positive for the banned substance ostarine. Lawrence has denied using the substance. He said he will continue answering all questions from NFL teams about the situation. "Just trying to be honest, because they know everything anyway," Lawrence said.

Wilkins is focusing on showing pro teams he'll be an asset on and off the field.

"I've done pretty good here, but it's all about what's ahead," he said. "You've got to show you can be consistent and dependable and be great at the next level."