Texas unranked and hoping to ride Robinson to turnaround 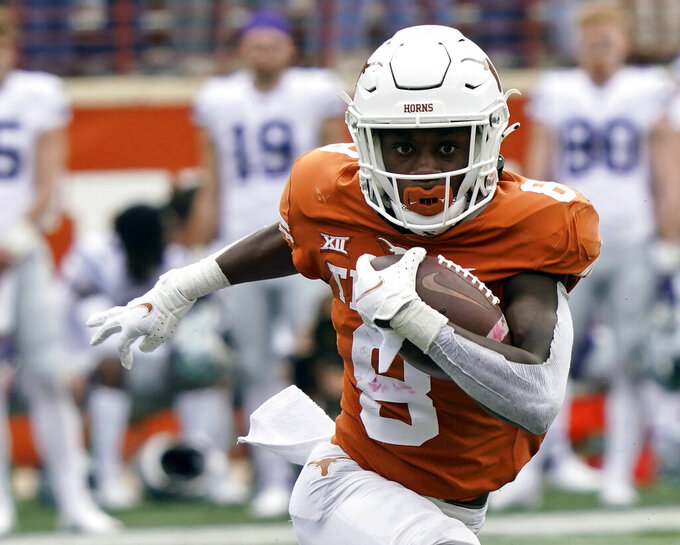 FILE - Texas' Xavier Worthy (8) runs with ball against Kansas State during the first half of an NCAA college football game in Austin, Texas, Nov. 26, 2021. Texas starts the season unranked after a 5-7 finish in 2021. And yet, there is optimism in Austin. (AP Photo/Chuck Burton, File)

AUSTIN, Texas (AP) — Bijan Robinson and his Lamborghini sum up what most believe Texas football should be: flashy, fun to watch and faster than anybody else out there.

Far too often, however, the Longhorns find a way to run themselves into a ditch.

Texas starts the season unranked after a 5-7 finish in 2021 with no bowl game and the longest losing streak since 1956 in coach Steve Sarkisian's debut. Years of legacy votes that presumed Texas was deserving of preseason rankings have finally vanished after too many seasons of unmet expectations.

And yet, there is optimism in Austin. At least the kind that assumes last season was so bad, this one has to be better.

For starters, there is talent on campus in the form of some of college football's best playmakers. The fluid and powerful Robinson (in and out of that Lamborghini courtesy of a name, image and likeness sponsorship deal) is one of the top backs in the country. Wide receiver Xavier Worthy had an explosive freshman season in 2021 and should be among the favorites for the Biletnikoff Award.

The rest is anyone's guess.

Sarkisian mined the transfer portal about as well as anybody, and even landed a starting quarterback in freshman Quinn Ewers, who beat out Hudson Card for the job. But that road has been bumpy with one transfer receiver (Isaiah Neyor from Wyoming) lost for the season to a knee injury and another (Agiye Hall from Alabama) suspended indefinitely.

And an offensive line already strapped for depth also lost starter Junior Angilou, who could play multiple positions, for the season to a knee injury.

Texas hasn't won the Big 12 since 2009 and most pick the Longhorns for the middle of the pack again. Still, that would be a step up from last year.

Ewers is a huge arm talent, he just lacks college experience. He was the quarterback everyone wanted out of high school near Dallas and Ohio State signed him. But a freshman season of sitting around Columbus prompted a transfer. That put him in a fight for the job with Card, who started the first two games in 2021 before getting benched. Sarkisian had a quick hook on his QB last year with struggles, so is Card still in play or would he consider a transfer?

The Longhorns lost five games last season they led at halftime. Texas has to shake off a bad combination of second-half adjustments and suspect conditioning if they don't want to get dominated in the third and fourth quarters again. Hiring former TCU head coach and defensive guru Gary Patterson as a special assistant may prove to be Sarkisian's shrewdest move of the offseason.

'Having Coach Patterson on board has probably been something that has excited me the most out of a lot of things we’ve done this off-season," Sarkisian said. “I’ve always admired his defensive mind.”

Sarkisian will lean heavily on his dependable run game while he sorts things out at quarterback. Robinson is the star after rushing for 1,127 yards and 11 touchdowns in a season cut short by a dislocated elbow. Behind him are workhorse Roschon Johnson and speedy Keilan Robinson.

Sarkisian may have felt some heat from Texas fans during that dismal debut season, but not so much from the administration and Board of Regents that approved his original six-year, $34.2 million guaranteed contract. But Texas likely won't abide another years-long skid like it endured under Charlie Strong from 2014-2016.

A blockbuster matchup with No. 1 Alabama on Sept. 10 will determine if Texas is ready for prime time. Then comes a matchup with rising UTSA, where coach Jeff Traylor, a former Longhorns assistant, could snag a huge statement win. The Big 12 schedule starts Sept. 24 at Texas Tech and the annual Red River Rivalry game with Oklahoma is Oct. 8 in Dallas.