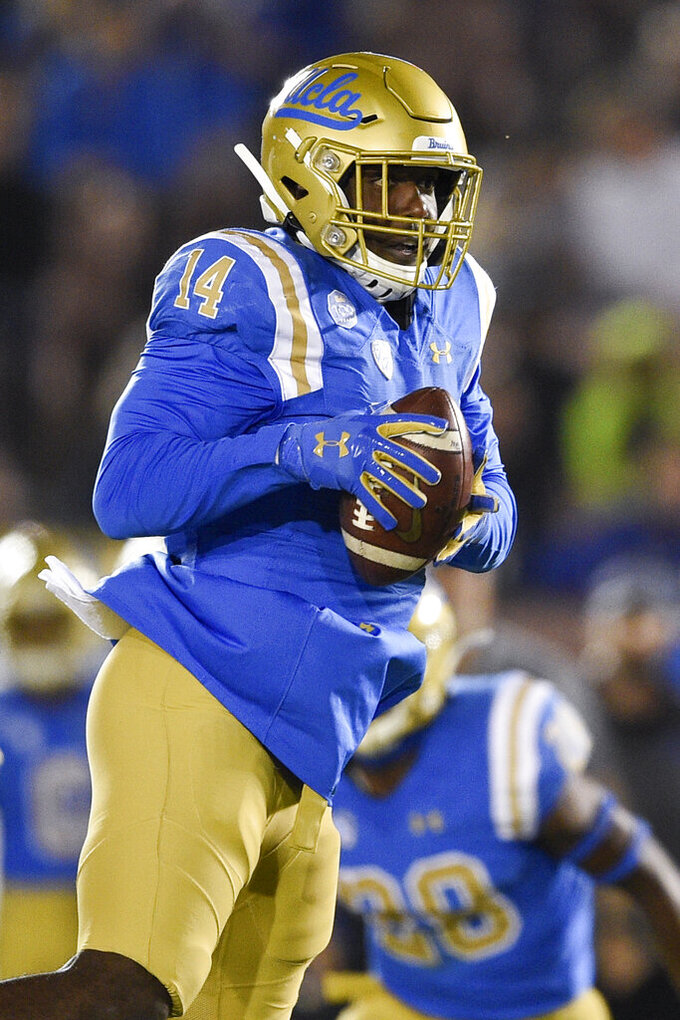 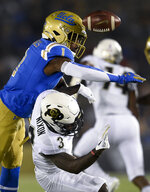 PASADENA, Calif. (AP) — UCLA has gone from woeful to controlling its own destiny in the Pac-12 South in less than a month.

The Bruins won their third straight game as Dorian Thompson-Robinson passed for two touchdowns and Joshua Kelley added two rushing scores in a 31-14 victory over Colorado on Saturday night at the Rose Bowl.

UCLA — which is on its first three-game winning streak since 2015 — goes into the bye week 4-5 overall but 4-2 in conference play. It trails ninth-ranked Utah by just a game in the division going into their Nov. 16 matchup in Salt Lake City.

"It's definitely a good feeling, to know that you're in control of your own destiny, and stuff like that, and that you're able to go and make something out of it. Now we just have to go and put the work in and get it done," Thompson-Robinson said.

The Bruins victory mirrored their earlier wins against Stanford and Arizona State. Their offense was balanced, and the defense was able to get consistent pressure on Colorado quarterback Steven Montez.

Thompson-Robinson was 21-of-28 for 226 yards with two touchdowns and an interception. The sophomore completed 10 of his first 11, including first-quarter TDs of 16 yards to Devin Asiasi and 45 yards to Ethan Fernea as the Bruins jumped out to a 17-0 lead 12 minutes into the game.

The offense took advantage of the defense forcing the Buffaloes to go three-and-out on their first two possessions and Krys Barnes' interception on the third series.

"I thought overall the defense did a good job," UCLA coach Chip Kelly said. "The group up front is generating a pass rush and we're doing a good job in coverage. We were very concerned with the passing attack of this team."

Kelley, who came into the game leading the Pac-12 in rushing at 105 yards per game, gained 126 yards on 23 carries and scored both Bruins' second-half touchdowns. The senior got his fourth 100-yard game of the season with a 35-yard touchdown with 4:14 remaining in the game to extend UCLA's lead to 31-14. He scored from 5 yards out during the third quarter.

"At the beginning of the season there a couple games where we trying to figure out our identity, but we have grown and are starting to execute," said Kelley, who has nine touchdowns in the past five games.

"I was just very disappointed with the way we started. For whatever reason we didn't start fast today," coach Mel Tucker said. "UCLA seems to have things on track and just outplayed us."

Colorado's Laviska Shenault was held to three receptions for 18 yards, a week after he had nine catches for 172 yards against USC.

"It's a group effort when you have something like that. We had to be conscious of where he was at all times," Kelly said. "We did a lot of in-and-out on him and top-down coverage on him. I thought that Darnay (Holmes) did a nice job when he was iso'd on him one-on-one. But also, when you can get to the quarterback and force the ball out a little bit quicker, that helps."

NOT A GOOD OMEN

Colorado might want to start asking for the first Saturday in November as its bye week so that it can properly celebrate National Bison Day.

Colorado: Mel Tucker's first year in Boulder started off well with wins in three of his first four, but the Buffaloes have dropped five straight and have allowed 30 or more points in 14 straight games dating to last season.

UCLA: The Bruins were allowing 503.3 yards in their first six games but have held two of their last three opponents under 300.

"We took into account during the bye week that we wanted to change how we were playing — to play faster and more physical. So, you're seeing it translate to the field now," Barnes said.

Colorado: Hosts Stanford next Saturday. The Buffaloes have not faced the Cardinal since a 10-5 victory in 2016.

UCLA: Has a bye week before traveling to Utah on Nov. 16. The Bruins have a three-game losing streak against the Utes, including 41-10 last year at the Rose Bowl.